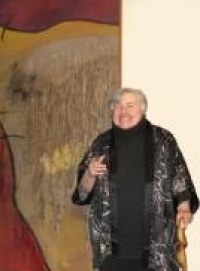 In her upcoming solo exhibit at the Villanova University Art Gallery, celebrated artist Joyce Harris Mayer pays homage in art to the prehistoric artists whose pictures and symbols left images of civilization long before written language took over as the world's principal form of communication.

Mayer's exhibit, Rondels: Digital Experiments with Space, Line, Color and Form, is her paean to artists who 25,000 years ago engraved their work on rounded animal bones, creating what is believed to be the first circular art form. The free public exhibit featuring 43 of the Medford, NJ, artist's abstract rondels opens January 10, 2014, with an artist reception from 5 to 7 pm in Villanova's on-campus Art Gallery in the Connelly Center. Refreshments will be served. Convenient free parking is available.

The Paleolithic Age rondels bear images of animals and symbols that have come to be seen more as forms of communication than decoration. All of Mayer's rondels, which measure about 21 inches in diameter, bear sharply defined, form- and color-rich abstract images.

Mayer sees art as one of the oldest of all human intellectual endeavors, and for her personally, “a sacred engagement in the act of creating art. My life has been greatly enriched by the inspiration I receive from the images created by artists I have never met, but have come to love. My Villanova exhibit is a celebration of their accomplishments.”

Painter, printmaker, watercolorist, sculptor, and assemblage and ceramics artist – and more recently, by physical necessity, a self taught digital artist – Mayer began her art career in the 1950s on Madison Avenue. She was one of the first women to rise to art director in the then solidly glass-ceilinged New York City commercial art world.

Even so, she found art work for hire unfulfilling. “To me, art is not commerce. It is a calling, and a great intellectual achievement to be respected.” Keeping her day job, she worked for herself at night, doing work she felt she was called to create, and winning multi-media honors in the process.

The 1960s were a good time for Mayer and other artists not so concerned about making money. Of then, an art insider would remember: “The most wonderful time to be in the art world was in the sixties because it wasn't a business.” It would become so soon enough in the pop art movement led by Andy Warhol.

“The cry went out that visual art was dead and had to reinvent itself,” Mayer writes of the impact of the 1970s' pop art phenomenon. “Yet, at this very moment, the Paleolithic cave art had been discovered in France, and in Africa archaeologists discovered our ancient human ancestors. . . I perceived a fusion of ancient and modern art as a source for making images.”

Mayer's abiding interest the connection between prehistoric and modern art developed into an intense intellectual pursuit. She once calculated that she spent 25 hours a week on her art and 50 researching it.

In New Orleans, where Mayer, her husband Bernard and their son Robert lived for many years, came crowning success followed by debilitation. Thriving in an innovative art community, she once convinced an art gallery to dedicate five rooms for a massive 'Cave of Art' exhibit of 14 of her eight-foot-high abstract paintings and prints, many of which she textured to convey the feel of a cave. “Five rooms!” she exclaims. “How many times in an artist's life does that happen.”

Then, the effects of a lingering, undiagnosed spinal fracture forced her to give up virtually all physical activity. Next, lymphoma made solvents, widely used in painting and printing, toxic to her. In her 50s and not yet ready to give up her life as artist, she had her son Robert show her how to use the computer. (“The smartest thing I ever did for myself was to buy him one when he was in high school,” she says.) Back to work she went as a digital artist and photographer, with more honors to follow.

Among the internationally esteemed artist's local recognitions are the Fine Art Award for Digital Print awarded by Judith Brodsky, founder of the Rutgers (NJ) Center for Innovative Printmaking, and the Otis B. Morse award conferred by Michael Smith, director of the Philadelphia Print Center. She is also a recipient of the Medal of Honor awarded by the National Association of Women Artists.

'Rondels' continues to February 20. All exhibits at the Villanova University Art Gallery are free and open to the public.