No Day Without a Line...

The Art of Niko Chocheli 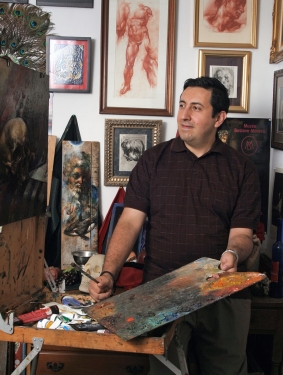 So remarkable are the variant styles, image content and art forms of painter, muralist, illustrator, iconographer, and etcher Niko Chocheli that a newcomer to one of his solo exhibits might think he or she happened upon a group show.

In April, the internationally honored Doylestown, PA, artist, teacher and storyteller by way of the Republic of Georgia, brings to Villanova's Art Gallery his fantastical paintings and drawings based on mythology, fairy tales, religion and history; works in the form and style of European Old Masters, academic drawings, original illustrations from his published books, and sacred icons.

Students are invited to attend the free public exhibit, “No Day Without a Line:
The Art of Niko Chocheli”, which opens Tues day, April 22. An open reception to meet the artist will take place Friday, April 25, from 5 to 7 pm, in the Art Gallery, 2nd floor Connelly Center. Refreshments will be served. Convenient on-campus parking is available. The exhibit continues to June 7.

Educated as a classical artist in his native Georgia and deeply devoted to his Eastern Orthodox faith, Chocheli hopes his Villanova exhibit “will leave a legacy, something of value for all who come. I hope each person will find something to take from my work a meaning, the sense of an inner depth.”

From his early childhood, Chocheli's family imbued in him a strong sense of Georgia's national identity, cultural distinctiveness, and history. Located along the storied Silk Trade Route where Asia and Europe meet in the Caucasus Mountains, the world's oldest Christian nation (the 4th century AD) has long been a target of conquest. Invaded and occupied many times, the people of the now independent country have stoutly clung to their great culture, and repeatedly resisted assimilation.

In addition to his classical art education, Chocheli also gained from his parents a world view and a strong desire to learn of other peoples and cultures. Worldwide, his work has appeared in more than 35 group exhibitions, and in the United States he has been accorded over 40 solo exhibits.

Of himself, he says, “Two things guide me as a person and artist. The first is my Christian Orthodox faith; the second is beauty. They are who I am, my faith being first and foremost.” Speaking most directly to his faith in his art are his icons and religious murals found in churches, schools and universities, monasteries, other institutions across the Delaware Valley and in his native land. A whimsical playfulness shows in his mystical and folk tale paintings of animals, sea creatures and other life forms occupying fantastic landscapes, and in his acclaimed illustrations for children's faith books.

Chocheli dedicates his Villanova exhibit to the late Mrs. Dolores 'Lore' Kephart, memorialized by the Villanova University community for her humanitarianism. She guided and supported his candidacy to become a permanent resident of the United States based on his “extraordinary ability in the arts”, a coveted status given usually to Nobel prize winners and artists of established world note.

In 1998, Chocheli was notified that he had been granted permanent residency under a unique Alien of Extraordinary Abilities Visa issued by the U.S. Government. Of that recognition, he says, “For Georgians, the United States was a beacon of freedom, looked up to and respected. I had read Mark Twain, James Fenimore Cooper, Washington Irving, O Henry and other great American writers. When I arrived in Doylestown, it was like I had been here before. I left home to come home”.

Chocheli's work is often compared to that of DaVinci, Michelangelo, and Rubens. Br. Daniel Burke (FSC), founder of the LaSalle University Art Museum, described the artist as having “the talent, vision and inner drive to become one of our century's true masters.”

In 1998, continuing in the educator/artist footsteps of his parents, he founded the Chocheli School of Fine Arts in Doylestown as a place where aspiring artists may obtain classical educations in fine art based upon the teachings of the Great Masters, instruction in drawing and painting in several media, and a solid grounding in art history.

In 2009, recognition of his impact on the cultural and artistic life of Bucks County, the Central Bucks County Chamber of Commerce awarded Chocheli its 'Lifetime Achievement Award in the Arts'. He also ardently keeps alive his connection with his birth country: “I miss my homeland dearly, but I have no sense of loss. For in a way, I have never left it. What I do have is a sense of responsibility to represent America in Georgia and to bring the rich culture of Georgia to my new home.”

The Art Gallery is open weekdays from 9 am into most evenings. For extended and weekend hours, and other information, telephone the Art Gallery at (610) 519-4612. Selected works for the Niko Chocheli exhibit may be previewed on the gallery’s website at www.artgallery.villanova.edu

Daniel in the Lions' Den by Niko Chocheli