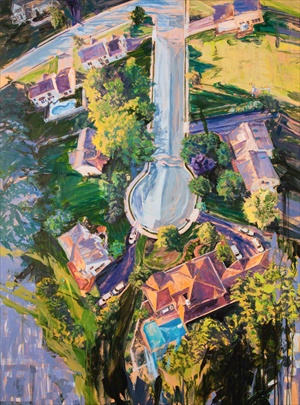 Villanova, PA – When Scott Wright says, “I am most interested in painting the things that scare me,” he's not talking about the part where he hangs out into yawning space from airplane windows and door-less helicopters jockeying his six-foot frame and big, bulky camera to shoot pictures. What scares him is what he sees happening to his planet below.

The multi-media works that the Lancaster, PA, artist creates from his aerial photographs will be exhibited in his sharp, colorful and edgy show “Altered States”, which opens Friday, January 9, 2013, in the Villanova University Art Gallery. A free public reception to meet the artist will take place from 5 to 7 pm on Friday, January 18. Refreshments will be served.

Long before Hurricane Sandy tore up the East Coast, Wright had finished a foretelling triptych entitled 'Tracking West'. Its left wing presents a Doppler radar image of storm clouds in swirl over the Eastern Seaboard. On the right panel, a satellite map image depicts extensive coastal and river flooding left by rains, winds and tides. In the center, a lone tree done in sepia stands surrounded by floodwater presented in sparkling blue monochrome. A sense of ominous beauty plays against sadness for the doomed tree. For Wright, nostalgia is not a longing sadness for the past; his sense of it is for the endangered present.

“Sometimes when making my work,” he says, “I feel as though I am looking backwards in time from a very precarious future to the start of an unraveling calamity. I feel very strongly about spotlighting these issues,” by which he means man-made climate change; the earth's finite supplies of clean water and energy; environmental degradation; misplaced trust in technology to solve global warming.

Wright's work is not that of a doom sayer. The large canvases upon which he beats his environmental drum are filled with swirling, brilliant color. A reviewer echoes the human analogy for the earth that Wright himself does when she notes: “. . . His rivers twist and turn, always moving, seeking and exploring. His colors can be dark, brooding greens and blues, or light, swirly pinks and lavenders,” writes Jean Holahan in the Lancaster New Era/Intelligencer Journal.

As an artist and a global warming bell sounder, Wright strives to create lasting impressions. “I want those who attend the Villanova exhibit to be astonished and touched by what they see. The world in a painting is a supercharged thing, untamed, always new and unexpected. If the show works to its fullest, the images will remain with those who see them for a long time afterward,” says Wright.

In one supercharged work of the untamed, two tornadoes bear down on a parking lot, a car in the foreground blurred in the driver's attempt to get out of their way. In an aerial image, Wright offers up the infamous Three Mile Island nuclear reactor, its cooling towers billowing into the atmosphere superheated steam that was once water in the Susquehanna River.

Wright presents his painting 'Subdivision' as a metaphor for Americans' “blissful ignorance” of the ongoing human degradation of the earth's natural systems. Over the aerial view of a suburban residential development, the artist has superimposed that most iconic of 21st century symbols of codification: the product bar code. The predictably patterned streets, well-tended homes with their attached two-car garages, tidy lawns, trimmed shrubbery and straight fences fit neatly between each parallel or intersecting line of the code. His point: “Everything in our purview has become a commodity and we increasingly count on technology to save us on the one hand from what we are doing with the other. Technology helps us to thrive in many ways, but it also has us transfixed and we're not paying attention to the bigger picture.

“Let's face the fact,” he adds, “the amount of time each of us allots to communing with nature on a daily or weekly basis is directly related to how much we care about seeing nature change for the better or worse.”

Years ago the Hudson River was a physical feature of the landscape over which Wright and his wife Kerry crossed on family trips. Then, he began noting the tide-shifting shapes of the river's islands below. Next, he started taking off in chartered aircraft with his camera. Caught in its lens and enriched on his large canvasses, often with an abstract impressionistic flourish, Wright's rivers become grand sweeps of estuaries, tributaries, farms and woodlands, roadways and paths, industry and power lines, towns and cities. In the earth, Wright sees human aspirations mirrored:

“The same urge to survive and flourish that spawns rain forests . . . also constructs cities, superhighways, sprawl, and climate change. . . Even so, for better or worse, we humans, along with nature, must be seen as occupying the same canvas – a living, evolving canvas.” Wright's sense of connectedness to the land took on added meaning for him when he and his wife began talking about starting a family. With fertility on his mind, he says, “the entire river system took on the embodiment of a macrocosmic living being, a vast circulatory system nourishing the landscape. When you're in the air looking down, there is no horizon; you are in the body of the planet – both literally and figuratively. All things, I believe, are interconnected on some basic level.”

Wright's commitment as planet advocate ratcheted up with the birth of his son, Skyler, eight years ago. “I want my son to grow up being part of a healthy planet. A lot of what gets me up in the morning is being part of a contingent of people who are sounding the alarm,” he says.

Wright's work has been exhibited in numerous solo and group shows across the United States and internationally. He is currently an Adjunct Assistant Professor of Studio Art at Elizabethtown (PA) College and recently served as visiting artist-in-residence at Franklin and Marshall College in Lancaster. He has also taught at Purchase College, State University of New York (SUNY); Temple University's Tyler School of Art, Drexel University, and the Philadelphia Museum of Art's Samuel S. Fleisher Memorial.

He holds a graduate degree in fine art from the University of Pennsylvania School of Fine Arts (called Penn Design). He earned his undergraduate degree in painting and photography at Purchase College and was selected as a scholarship recipient to attend the Ansel Adams Seminar at the legendary photographer/environmentalist's home and studio in Carmel, CA. The Wrights live in Lancaster, where the artist works out of a studio in a refurbished factory. His Villanova exhibit continues to February 14.

The Villanova University Art Gallery is open weekdays from 9 am to 5 pm. For weekend and extended hours, and other information, telephone the Art Gallery at (610) 519-4612.