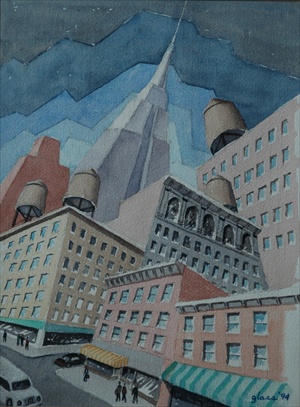 As a former architect, designer, builder and developer, Lester Glass had to conform his work to forces of nature and governing Codes. As a painter, he hearkens to his own unique visual perception. Unlike the buildings he designed as a successful architect, those that dominate many of his painted cityscapes answer to neither known form nor nature's forces. A Lester Glass landscape and the scene from which it is based are not one and the same. That's because in massing, positioning and detail, he is responding to his personal vision of the view, not the view itself.

“For me,” says the artist, “the literal rendering of a subject is not of concern. With my art, I have fought to find a unique expression and interpretation of what we literally see. My objective is to heighten the purely visual experience with a coherent composition and design that, as the French say, has joie de vivre.”

Striking testaments to Glass' singular and vivid artistic vision are presented in his solo show 'Places and Faces', which launches the 2013-'14 exhibit season of the Villanova University Art Gallery. A free public reception to meet the New York City artist takes place Friday, September 6, from 5 to 7 pm, in the Gallery, Connelly Center 2nd Floor, on the Villanova Campus. Refreshments will be served.

“He transforms his subjects into profoundly expressive images with a semblance of form never before seen,” writes Philadelphia art reviewer Burt Wasserman of Glass' show.

The exhibit comprises 53 watercolors, oils and acrylics, plus drawings in ink and graphite, many of them whimsical. In Impression, Public Library and Skyline, NYC, Glass' skyscrapers seem to be craning for a view of the human hubbub on the streets below. In Early Morning Chelsea Skyline, the highest structure is a rooftop water tank above a three-story building.

“There are no conscious social, political, literary or historical allusions in my work,” says Glass. “My subjects are those to which I feel the most intense responses, which are purely visual. I become aware of them as the result of a brief but intense visual experience.”

In At the Beach, Cape Cod, MA, Glass offers an eye-level view of pale, sun-beckoning vacationers, unselfconsciously stretched out on the sand. In Dune Bridge, trampled vegetation on both sides of a foot bridge testifies to beach goers' disregard for the sand dune that the bridge was put in place to protect

In Impression Early Morning Main Street, Bizbee, AZ, buildings huddle together, seemingly helping each other to remain upright. Several works in rich earth tones capture Glass' vision of the spires, buttes, and mesas of the Southwestern American deserts. Arizona's fabled Painted Desert is the subject of two works in the exhibit.

If whimsy is seen in Glass' land- and cityscapes, that is not the artist's vision for his people portraits. “These are not whimsical works. They are of life,” he says. A sense of tension hovers in Separate Worlds, NYC Subway, in which two riders sit warily side-by-side. .

Growing up in Brooklyn, NY, in the 1930s, drawing and painting became Glass' principal pursuits. As an art major in high school, he found inspiration as a watercolorist in the tutoring of a “very fine” teacher and gifted artist.

For a young person with art in mind, there were few better places to go in the late 1940s than Brooklyn College, which Glass did. “It was where you went to learn what was new in art,” he says. Leading art innovators on the faculty included abstract painter and sculptor Robert J. Wolff; early minimal abstractionist Ad Reinhardt; muralist Burgoyne Diller; renowned photographer Walter Rosenblum, and printmaker Stanley Hayter, whose cutting-edge work influenced artists from Picasso to Pollock. “It was a mecca for students and teachers of a transplanted Bauhaus pedagogy,” the artist adds.

Founded by renowned architect and teacher Walter Gropius, the Bauhaus was opened in post-World War I Germany and closed by the Nazis 14 years later. The famed school sought to incorporate artistic and humanistic sensibilities into industrial design and production. Long outlasting its short life, the Bauhaus influenced how art is taught, heightened its relationship to society and technology, and affected the work of artists and designers ever since.

Far more than painting, Glass' Brooklyn College education went to “a broader view of the language of vision, how to see in a different way,” says the artist, whose studies included the history of art and design, architecture, printmaking, photography, even woodcraft. (Indeed, Glass made all the wood frames for the paintings in his Villanova exhibit in his home woodworking shop.)

Following Brooklyn, he majored in fine arts at Cornell University, where he earned a Masters in Education degree. Careers in painting, teaching and architecture, with its lure of designing in three dimensions rather than two, were on his mind.

While serving in the Air Force following the 1950 outbreak of the Korean War, Glass applied for entry into the Harvard University Graduate School of Design to study architecture. Following graduation, he found employment as an architect at several New York City firms, subsequently opening his own firm there, remaining in business for himself for 35 years. Columbia University's School of International Affairs is among his many distinguished works..

Despite a daunting work schedule, Glass continued to pursue painting through night courses at the Art Students League of New York. Honing his skills in anatomy and portraiture, Glass calls the experience “my culminating formal training in painting and drawing.”

His work has been exhibited at Harvard University, the Art Students League, the Columbus Gallery in New York City, and in Massachusetts at the Jennifer House Gallery in Great Barrington, the Lichtenstein Center for the Arts in Pittsfield, and the Welles Gallery in Lenox.

The Villanova University Art Gallery is open weekdays from 9 am to 5 pm. For weekend and extended hours, and other information, telephone the Art Gallery at (610) 519-4612. Selected works for the Glass exhibit may be previewed on the gallery’s website at www.artgallery.villanova.edu. Additional works by Lester Glass may be found at http://lesglass.artistwebsites.com.