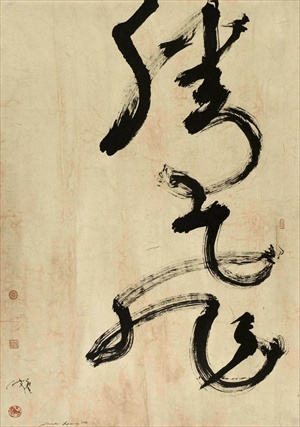 The Art of Lampo Leong

Villanova, PA – “Out of the billowing, vivid clouds that roll across his canvasses, shards of characters flicker and float, offering the hope of explicit meaning, but in the end remaining hidden, enigmatic and provocative,” writes University of California - Berkeley Professor Pat Berger in a review of Lampo Leong’s work.

A master of Chinese calligraphy and internationally acclaimed for the power and color of his abstract canvasses, the China-born artist brings his East/West fusion art to the Philadelphia area with an exhibit at the Villanova University Art Gallery.

“Calligraphic Inspiration: The Art of Lampo Leong” opens Friday, February 22. The public is invited to witness the artist at work in a free demonstration of his calligraphy and talk at 3 pm. A free public reception to meet the artist follows from 5 to 7 pm.

The exhibit will feature some 30 abstract paintings, oils, acrylics and mixed media on canvas, along with his calligraphy in ink on rice-paper. “Bombardments of color and form,” “transcendent,” “luminous,” “a celebration of energy beyond the visible world,” are some of the terms used to describe Leong's work.

Art historian and curator Josienne Piller calls his art transformative: “Leong's work deconstructs calligraphy and reintegrates the resulting fragments into a unified whole that transcends cultural boundaries. This process of transformation creates hybrid works that conjure up what appear to be phantasmagoric images of the natural world.”

For Leong, that transformational process begins when inked brush touches paper to create the Chinese calligraphic form, an act that signifies a very personal encounter based on a profound grasp of a millennia-old spiritual inheritance. Explains Leong, who has been studying Chinese calligraphy seriously since the age of 10 growing up in China:

“In Chinese art, the spirit of the brush stroke is fundamental. In the traces of the hand, one can read not merely the marks of the calligraphic character or image, but also appreciate the instantaneous revelation of the artist's total life experience focused in the moment of setting brush to rice paper.”

Calligraphy has stood as the core expression of the beauty, strength and vibrancy of China's culture and the daily lives of its people for more than 5,000 years. The cursive script, called by some the impressionistic art of Chinese calligraphy, was introduced some 1,600 years ago to allow artists greater freedom of line movement. The 'wild' cursive became an extended manifestation of that freedom. As precision of the brush stroke showed the hand and mind of the traditional calligrapher, 'wild' cursive work is intended to unleash disciplined abandon. Strokes were reduced to scrawls, the inadvertent drop of ink revered as vital energy, and interconnected characters twisted and deformed almost to the point of illegibility.

“These artists broke with the conventions of calligraphy's classical masters to develop a theory that promoted exaltation and unruliness as the prime artistic virtues. . . . in their 'wild' expressive style, they exalted passion, drunken abandon, spontaneity and even chaos,” notes Dr. Kevin Allton.

Once Leong completes a calligraphic work intended for a painting, he tears up the rice paper and rearranges its inked pieces to create line and form devoid of linguistic meaning. “These recombined parts, from shattered Chinese characters and the broken cursive calligraphic strokes, provide a structure and rhythm for my painting,” explains Leong. Next, he transfers images into digital files where they can be manipulated and photography introduced “to create a sense of grandeur.”

Thence begins a long and involved computer-aided creative journey that encompasses the application of hundreds of layers of acrylic and oil paints and the creation of canvasses up to 46 by 72 inches in size, hopefully devoid of cultural bias. He explains:

“Rather than aiming at a culturally-coded surface statement, I deconstruct and recombine fundamental processes and elements from each culture. When everything coalesces, what I hope will emerge is a transcendental vision that is greater than the sum of its parts.”

Such a culturally neutral artistic statement would have been exceedingly dangerous to make when Leong was growing up in China. This was during the 'Cultural Revolution' of Communist Party Chairman Mao Zedong, a period (1964-1976) when anti-intellectualism thrived, universities were closed, and artists, including school students, were put to work in support of government propaganda campaigns.

A young teen at the time who was expected to pitch in, Leong also remained committed to his art and vision. After class, he would return to school to do propaganda art for the school but he used that as a chance to study painting and drawing. “It depends on how one takes advantage of things,” he says. “One can use that opportunity to study art or just waste a lot of time. I am one of those who always tries to get the most out of any situation, no matter how difficult.”

Shortly after the Cultural Revolution ran its course, Leong became one of a very few students out of over 10,000 applicants to be accepted by the recently reopened Guangzhou Academy of Fine Arts, one of China's leading art schools. Through poor quality reproductions in textbooks, he familiarized himself with classical realism, Greek sculpture and the Renaissance.

In 1983, Leong left China for the United States, subsequently earning with 'High Distinction' a Master of Fine Arts degree from the California College of the Arts in San Francisco. Back in his homeland, he received a Doctorate in Art Theory and Practice at the prestigious Central Academy of Fine Arts in Beijing. He is currently a Professor of Art at the University of Missouri–Columbia. As multimedia artist who has collaborated with dancers and composers, his reach from Middle America as artist, visionary, and teacher is international.

Among his over 400 exhibits around the world, more than 60 have been solo shows. His art is collected in numerous museums and more than 70 public and corporate collections; his name is included in more than 90 biographical references. San Francisco proclaimed a day in his name to honor his work in creating an inlaid calligraphic medallion set into a 26-foot-diameter circle of granite in a city park. Though teaching is a special love, first and foremost Leong is an artist with a vision:

“One of the most pervasive and enduring motives for artistic creativity must surely be the desire to express a sense of awe and majesty evoked by the overwhelming power of Nature… As for me, the inky blacks of figural marks playing against fields of colored densities and radiant lights speak of my own fascination with the processes of creation.”

'Calligraphic Inspiration: The Art of Lampo Leong' continues to April 18.

The Villanova University Art Gallery is open weekdays from 9 am to 5 pm. For weekend and extended hours, and other information, telephone the Art Gallery at (610) 519-4612. Selected works of the Lampo Leong exhibit may be previewed on the gallery’s website at www.artgallery.villanova.edu.

View more of Lamp Leong's work on his website, also, several videos about how he creates his art are found on the Syndicate Mizzou website.

The Surreal Revolution I, 2011 Acrylic and Mixed Media on Canvas 46 x 70 inches