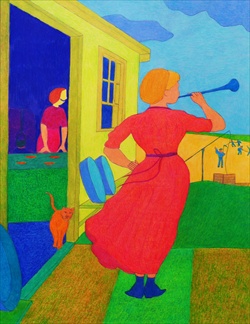 Villanova, PA – Some 15 years ago Jean-Noel Vandaele ended his long career as an abstract painter to become a figurative one re-creating paintings of Flemish, Japanese and American master artists. He substituted his own flat, vivid colors; simplified detail, redrew characters, and gave them plain faces. Once into each painting he added a bright yellow head in profile, an open smile its only feature.

Purists were scandalized. Some reviewers, however, have come to see Vandaele's work as a re-imagining, with a wry, contemporary sense of humor aided and abetted by his smiling signature "Yello Head" figure. Vandaele's "Yello Head" paintings and drawings have been amusing, bemusing and challenging art exhibition audiences from Paris to Tokyo ever since.

The Villanova University Art Gallery is the next stop for the iconoclastic French artist and his exhibit "Hello Yello", which includes his interpretations of masterworks as well as new, original paintings and drawings, with the ubiquitous "Yello Head" attendant in each. The exhibit opens August 23 with a free public reception on Friday, September 7, from 5 to 7 pm. to meet the cheerful, outgoing artist.

Featured works include two of Vandaele's large interpretations of Winslow Homer, the artist's favorite American painter; Japanese art in colored pencil, illustrations of Iroquois and Algonquin Indian legends and tales, and six large pieces on the plays of William Shakespeare. In a series called "Veritas", Vandaele has tethered a male and female dancer to a flowing scarf, alternating "Yello Head's" head on one dancer then the other, giving him/her the opportunity to dance in each other's shoes and psyches. In Vandaele's perception, "Yello Head's" appearance in his art serves a dual function:

"Yello Head is looking at us, too, discovering our life and our world," he says. That dynamic was picked up on by The Newhouse Center for Contemporary Art in New York, where Vandaele was invited to an artist-in-residency. In announcing his exhibit there, the Center placed "Yello Head" on a metaphysical plane as representing "a parallel universe that exists simultaneously to ours. The yellow character mingles with the other characters from our world and, in the process, redefines their relationships and existences."

That two-way effect may be sensed in Vandaele's work in colored pencil on paper titled "Couple of Bathers" a re-creation of Winslow Homer's 1873 "The Bathers" showing two young women strolling on a beach. Typically, Vandaele omits shadows and details of the original wood engraving. The facial features of one bather are simplified, while those of the other are replaced by "Yello Head", the upraised arm in Homer's work supplanted by one in vivid yellow. In the original, the woman's gaze is downward; in Vandaele's, she seems to be looking out beyond the canvas, her wave a hail to a familiar someone.

Vandaele emphasizes that all of his re-creations are done with great respect and homage to the originals. He believes that what he is doing signifies a "New Realism" in art. Some think he may be on to something:

"His work, in the end, is a reappraisal of artistic traditions and standards. In reworking established themes, Vandaele causes us to question traditional artistic concepts and ways of evaluating aesthetic standards," notes Dr. Louis Zona, director of the Butler Institute of American Art in Youngstown, Ohio, which hosted an early Vandaele exhibit in the United States.

"By means of flattened, vivid colors, extremely bright and expressive, Jean-Noel Vandaele lets our imagination carry on to a rare and powerful analogic world," poses the C. William Gilchrist Museum of the Arts in Cumberland, MD, another Vandaele venue.

Vandaele isn't sure himself of the significance of "Yello Head", although he and others see its effect as helping to serve one of art's primary missions, that of expanding consciousness and awareness of self.

"What's important to me is that the presence of "Yello Head" might help people to look at their own lives, that this experiment might help us to be more alive to the gift of life, 'to the beauty of thy days,' as Shakespeare wrote. I'm not really trying to say anything through my work. There's no specific message here," says Vandaele.

In his Villanova exhibit, Vandaele for the first time presents "Yello" as a head without a body. He sees the development as a new step in his character's evolution. He also for the first time places words in his work: "Maybe it's paradoxical, but 'Yello Head' seems to be more personified as just a head. It's a step ahead if we consider 'Yello Head' as a concept."

When he completes a current and long-standing labor of love, Vandaele will become the first artist to illustrate each of the more than 30 plays of Shakespeare, claims the artist. The daunting task, he says, will encompass some 120 major, original works with "Yello Head" appearing in each scene. While the other characters' reactions to the goings on are indicated by the turn of their mouths and body language, "Yello Head", as always, remains smiling throughout.

"Achieving coherence and respect for the plays within the context of invention," is Vandaele's intent. His minimalist style in scene and character depiction allows him, he says, to present Shakespeare "without distortion", trusting that viewers can fill in the nuances and arrive at their own judgments.

His admiration for the remarkable color, form and line of Japanese Ukyo-e woodblock prints and paintings led Vandaele to his colored pencil series on the storied Kabuki Theater. Here he shows "Yello Head" as a faceless, always smiling, colorfully-gowned companion to Japanese beauties, and a happily doted-on child of privilege at play in a long ago time in Japanese history.

The series, set in the Edo period of Japan’s artistic flowering (1603-1868), illustrates "Yello Head's" transcendent nature, says Vandaele: "Being of no time, space, gender, or even real body, 'Yello Head' transcends all, travelling in the imagination, visiting art throughout the ages."

Vandaele's visual editing of Flemish masters from the pioneering 15th century oils of Jan Van Eyck to the extravagant Baroque paintings of Peter Paul Rubens signified, in part, a journey of self discovery. Of Flemish ancestry, his birthplace of Ghyvelde, France, is a stone's throw from the border of Belgium. "Yello Head's roots may be close to home as well. Says the artist:

"Each time I draw 'Yello', it seems to be someone very familiar to me, my mother or father, brother or sister, a good friend, or even like me. I suppose the creation of 'Yello' could be similar to a self-portrait process, but it's not. 'Yello' is another self, a spiritual one."

Vandaele studied under noted abstract painter Louis-Olivier Chesnay and attended the Ecole des Beaux Arts in Dunkerque, France.
The Vandaele's exhibit continues to October 4. All exhibits at the Villanova University Art Gallery are free and open to the public. Convenient on-campus parking is available. The Art Gallery is open weekdays from 9 am well into most evenings. For extended and weekend hours, and other information, telephone the Art Gallery at (610) 519-4612.

The artist's work and other information about him may be found on his websitehttp://www.jn-vandaele.com.

The Theatre of William Shakespeare Romeo and Juliet Colored pencil on paper, 12" x 17"