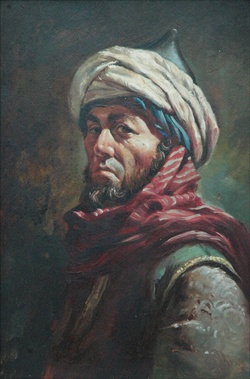 Villanova, PA – Villanova University's celebration of the art of Ray Sternbergh more than 10 years after his death gives the New York painter, illustrator, sculptor and wood carver an exhibit that the reticent artist never sought in his lifetime. The posthumous show, arranged by his widow and daughter, comprises never before publicly seen landscapes, seascapes, portraits, still lifes, sculptures, and a group of delightfully stylized, palm-sized 'airplanes' he hand carved for the Sternbergh family Christmas tree.

The exhibit, “Ray Sternbergh – a Retrospective”, opens Friday, February 24 with a free public reception in the Villanova University Art Gallery located in the Connelly Center on the Villanova campus. Refreshments will be served.

At Pratt Institute, famous for turning out promising visual artists, his 1950s classmates saw the Korean War-era Air Force veteran as destined for a place of note as an American painter. Those at Pratt who knew Sternbergh, then studying on the GI Bill, recall a quiet man whose presence went without much notice – until he engaged a canvas. “You wouldn't know he was in the room until you saw him painting. There were some very good artists in that class, but he was the best,” remembers college friend Tom Doyle, a retired illustrator.

When Doyle saw a work Sternbergh did of a girl in an Oriental dress, he thought his college friend was on his way. “It knocked my eye out. Boy, did he have his flesh colors down. He's ready to make a living,” Doyle remembers thinking. That Sternbergh didn't become an acclaimed artist is no mystery to his daughter Jennifer Huth, now the mother of two.

“Dad wasn't interested in changing the world with his art. The hustling, dealing with agents, it just wasn't who he was. He painted for himself. It was pure selfish love and joy,” says Huth.

Sternbergh had been mentored by legendary illustrator/artist Harry Schaare, who encouraged the young artist to go to Pratt. Sternbergh went on to make his living as a comic book and book cover jacket illustrator, an industrial designer, and art director in the marketing and point-of-purchase industries. He saved painting for his private life. Only once did he enter work for show, contributing a few canvases to a local exhibit near his home in Northport, Long Island, NY. He never sold, or tried to sell a painting. “But, if you really wanted one and he liked you, dad might give you one,” says Huth. One family member who received a canvas said he could not take the risk of parting with this cherished gift, even temporarily for the Villanova exhibit.

With the picturesque Northport harbor at the end of his lawn and a small airport nearby, Sternbergh indulged his passions for painting, sailing, piloting small aircraft, sculpting, writing poetry, making toys and furniture, riding motorcycles and rebuilding their engines, among other pursuits. As a gift for daughter Jennifer, he made a doll house replete with décor, furnishings, working doors and windows, and even an operating laundry chute.

As a painter, realism was his forte, notes his widow Nancy. “He painted what was there and he did it incredibly well. He had golden hands. I once asked him to let me represent him as an artist. He wouldn't; nor would he let anyone else, either. My, he was an incredible artist.”

Near the end of his life, Sternbergh shared with his daughter the sacrifices that art demands of the artist: “My dad was passionate about everything he did. He and I talked about the struggle, sacrifice, total commitment, and dedication required to be an artist and master your art while also being out in the world experiencing life.

“The conflict is, your life informs your art, so you need to live in order to create. However, life and living it ultimately takes you away and distracts you from your art, and that is the cruel reality.” Jennifer, her husband James Huth, and their two children live in Bryn Mawr, PA.

Retirement in the early 1990s became one of the most prolific creative periods of Sternbergh's life. As a senior citizen, he conceived and carved his intricate and thematic ornamental 'airplanes' with pilots, passengers, and moving parts. Starting with Christmas, he expanded his fleet to honor Thanksgiving, Easter, Valentine's Day, the Fourth of July and other holidays. 'Pilots' include Santa Claus, Humpty Dumpty, Jack Frost and the Tooth Fairy, whose plane includes a thumbnail-sized box with removable lid to hold the tooth.

In all, Sternbergh hand crafted 19 planes and components. In this labor of love, Huth sees at work her father's interior sense of mirth, which could burst forth in infectious laughter when he was with people with whom he felt at ease.

Retirement also brought an intensified commitment to his painting. With skills honed by classes at the School of Visual Arts in New York City, he produced a large body of paintings during this time, a number of which have been selected by his widow and daughter for the Villanova exhibit.

Even in the last months of his life, as he battled pancreatic cancer, Sternbergh was not idle. Jennifer recalls him taking down a large canvas he had done years before of three clam boats tethered to buoys in the Northport harbor. In hindsight, he noticed that the light reflected off the water appeared brighter than that of the sun, which cannot be. So he fixed it. “He was obsessed with capturing light,” says Huth.

He died in 2002, having survived 13 months after his diagnosis of pancreatic cancer, about three times the expectancy.

The exhibit came about when Huth, a graduate student in Villanova's Theatre Program, met Fr. Richard G. Cannuli (O.S.A.), head of the Theatre Department and the University Art Gallery. Invited to the Huth home in nearby Bryn Mawr to examine Sternbergh's considerable artwork, Fr. Cannuli, himself a Pratt graduate, liked what he saw: “It was time that someone who had produced such a large body of varied works without ever having had an exhibit, should have one.” Would the artist have been pleased with having a show of his work?

“I think he would be,” says Nancy Sternbergh. Huth agrees, with a caveat: “He didn't like being the center of attention or making small talk. So it would make him sweat a bit under the collar. But overall I think he would be proud.”

Overhanging the show is a large self portrait of the artist looking back at its creator. His jaw is set, his gaze is direct – and his look wary.

'Ray Sternbergh (American 1931 2002) A Retrospective', continues to April 11, 2012. All exhibits at the Villanova University Art Gallery are free and open to the public. On-campus parking is also free and usually convenient. The Art Gallery is open weekdays from 9 am well into most evenings. For extended and weekend hours, and other information, telephone the Art Gallery at (610) 519-4612. Selected works from the Ray Sternbergh exhibit may be previewed at artgallery.villanova.edu