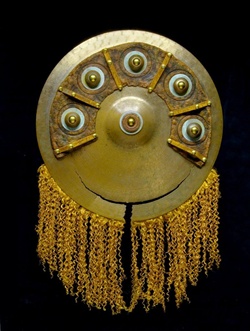 Villanova, PA – A reviewer calls Carol Cole's sculptures “exquisite abstractions” of cultural significance and marvels at her mastery of design and illusion. Works by Cole that seem to be of great weight are typically quite airy. A sculpture taken to be of metal or wood is neither. A shield or totem that one might think by shape, design and ornamentation to be ancient cultural artifacts are as new as the 21st century art in paper and pulp that Cole creates in her Philadelphia studio from the throwaways of modern American culture.

A mix of Cole's large-scale and smaller wall-hanging and free-standing sculptures of paper, pulp, and found objects comprises her exhibit, “Objects and Elements, Sculpture by Carol Cole”, which opens at the Villanova University Art Gallery on Friday, April 20. A free public reception to meet the artist will take place from 5 to 7 pm. Refreshments will be served. The Art Gallery is located in the Connelly Center on the Villanova campus. Convenient, free on-campus parking is available.

“Give me one hundred of anything and I will make something interesting,” says the artist, who lives in Bala Cynwyd. Indeed, Cole's four-foot-diameter Steinway Mandala, her exhibit's signature piece in its public debut, started out as a box of castaway felt-tipped wooden hammers and actions from a 1920 Steinway grand piano that a friend had restored, and a two-inch thick hunk of industrial foam.

The sharply angular actions, set tip-to-tip in a taut, repeating pattern, form an outer and inner circle on the wheel, with a round of hammers nestled in between. One notices an asymmetry; though identical in all other ways, the hammers are arranged by size, each piece being minutely smaller than its neighbor, a difference which, in their functioning lives, served to individuate the tone of each piano key. The entire background of the piece is collaged sheet music (“Bach Two-Part Inventions).

While Cole's process typically involves experimenting with shapes, that of the mandala fell into place by itself. “Once the pieces were nestled together, they formed themselves into a circle.” To Cole, the ease in making the mandala and the effect of the finished work “are rather spiritual.”

Cole's combing grounds include – but are not limited to – junkyards, dumpsters (She is a member of a Philadelphia-area artists' collaborative called Dumpster Divers), yard, estate, and sidewalk sales, flea markets and wherever else unwanted things end up. She can also be found in hardware stores looking for the yet-to-be used. A sense of form and beauty guides her selection process.

“Object-inspired design” is the term Cole gives her work, with the found objects themselves serving to suggest the design of a piece. “I don't know what I'm looking for until I see it. And I don't know what I'm making until it is finished,” Cole says of her intuitive approach to her art. A found faucet handle, artificial hair, brass findings and some shell casings morphed into Woman Warrior Shield, a mixed-media sculpture. Inspired by African sculpture, Cole conceived and created Hope with an industrial polishing brush, (a junkyard discovery), a wood finial (a hardware store purchase), sea shells, shirt buttons, gold leaf and hand-made paper.

Though intuitive it may be, Cole acknowledges that her artistic process is informed by a broad and eclectic education. At Stanford University, where she graduated with honors, she studied history, art history and anthropology. She holds a master's degree in education from Harvard, and another in television and film from Syracuse University. She has also participated in accredited Advanced Theoretical and Critical Studies at the Barnes Foundation under the aegis of the Pennsylvania Academy of Fine Arts.

Colgate University's Longyear Museum of Anthropology was so impressed by Cole's exhibit there of Asian, African and North American tribal shields, totems and other work that it commissioned a four-color catalog of the show. Cole's sculpture “does not aim to reproduce tribal art, but rather engages in a dialogue across cultures,” writes Longyear Senior Curator Dr. Carol Ann Lorenz.

The artist's work, adds Dr. Mary Moran, chair of Colgate's Sociology and Anthropology Department, “. . . epitomizes the interactive flow of cultures across geographical boundaries. Cole is using discarded items from our culture to produce iconic forms that resemble, without strictly recreating, the aesthetic of other places and peoples. Museums of anthropology are interested in this kind of context and process.” Cole traces her interest in ethnographic art and architecture to local Native American pottery and baskets found in the United States Southwest. Her art, she says, goes back to the textures of the mountains and deserts surrounding her hometown of Tucson, Arizona. “My work is all about texture. There is something I like about dark, earthy colors. Rust is my favorite color.”

There was a lot of wandering in the figurative desert before Cole discovered her joy of art in papermaking and sculpture. She began her full-time art career in Syracuse as a potter, making and selling hanging planters, serving pieces, and other clay products. The recession of the late 1970s hit, and sales fell. Next, she made and sold ceramic jewelry, a business hurt by the recession a decade later. In any case, she found herself burned out and not liking what she was doing.

At loose creative ends, she took a 1991-'92 class at the Papermaking Institute at Philadelphia's University of the Arts. She began making stationery to earn money, and along the way found what she really wanted to do was use the paper pulp to make sculpture. She slowly began building a client base and learned one of life's great lessons: the importance of finding what you love and then doing it.

“The biggest challenge for any artist is finding your own voice, and your own uniqueness – then having the courage to stick with it. This took a long time for me to learn,” says Cole, who has been a high school teacher, worked in television, led numerous workshops, and filled several artist residencies. She is a longtime faculty member of the Main Line Art Center of Haverford, PA , where she has taught papermaking and collage.

Cole has had several one-person exhibits, and participated in scores of invitational and juried group shows throughout the Philadelphia region and across the country. Along with numerous schools, churches, corporations, organizations and individuals, her sculptures have been commissioned by Children's Hospital of Philadelphia and the Garden State Discovery Museum. In 2009, she led a collaboration of artists and pre-schoolers in constructing a sculptural installation at the Please Touch Museum in Philadelphia.

Cole's exhibit continues to June 9, 2012. All exhibits at the Villanova University Art Gallery are free and open to the public. The Art Gallery is open weekdays from 9 am well into most evenings. For extended and weekend hours, and other information, telephone the Art Gallery at (610) 519-4612.

The artist's work and other information may be found on her websitewww.carolcole.com. Selected works from her Villanova exhibit may be previewed at www.artgallery.villanova.edu.