The following books are past years' nominations: 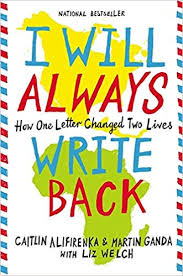 I Will Always Write Back

by Caitlin Alifirenka and Martin Ganda

One of the best ways Villanova welcomes new students to campus is with a good book.  We are honored that for the 2019 - 2020 academic year year One Book Villanova selected, I Will Always Write Back: How One Letter Changed Two Lives. Making friends and opening yourself up to new people, new experiences, and new ideas is what a good college education is all about.

This book was chosen because of the conversations we hope that were started on campus. These conversations are important not only to you as Villanova students but also as citizens of the world.  Conversations about generosity and kindness, interconnectedness of the world and the human race, who should be able to come into the United States, how to address issues of race and culture and most important, as young people what can you do.

The 2018-2019 selection was Just Mercy by Bryan Stevenson. Bryan Stevenson was a young lawyer when he founded the Equal Justice Initiative, a legal practice dedicated to defending those most desperate and in need: the poor, the wrongly condemned, and women and children trapped in the farthest reaches of our criminal justice system. One of his first cases was that of Walter McMillian, a young man who was sentenced to die for a notorious murder he insisted he didn’t commit. The case drew Bryan into a tangle of conspiracy, political machination, and legal brinksmanship—and transformed his understanding of mercy and justice forever. Just Mercy is at once an unforgettable account of an idealistic, gifted young lawyer’s coming of age, a moving window into the lives of those he has defended, and an inspiring argument for compassion in the pursuit of true justice.*

The 2017-2018 selection was"Acts of Faith by Eboo Patel, a remarkable account of growing up Muslim in America and coming to believe in religious pluralism, from one of the most prominent faith leaders in the United States. Eboo Patel’s story is a hopeful and moving testament to the power and passion of young people—and of the world-changing potential of an interfaith youth movement."

The 2016-2017 selection wasThe Sixth Extinction by Elizabeth Kolbert. Over the last half a billion years, there have been five mass extinctions, when the diversity of life on earth suddenly and dramatically contracted. Scientists around the world are currently monitoring the sixth extinction, predicted to be the most devastating extinction event since the asteroid impact that wiped out the dinosaurs. This time around, the cataclysm is us. In The Sixth Extinction, two-time winner of the National Magazine Award and New Yorker writer Elizabeth Kolbert draws on the work of scores of researchers in half a dozen disciplines. Through these stories, Kolbert provides a moving account of the disappearances occurring all around us and traces the evolution of extinction as concept, from its first articulation by Georges Cuvier in revolutionary Paris up through the present day. The sixth extinction compels us to rethink the fundamental question of what it means to be human.

On Care For Our Common Home.pdf
Pope Francis' Encyclical is suggested reading with our book selection for 2016-17

The Distance Between Us

The 2015-2016 selection wasThe Distance Between Us by Reyna Grande. Reyna Grande vividly brings to life her tumultuous early years in this compelling, unvarnished, resonant story of a childhood spent torn between two parents and two countries. As her parents make the dangerous trek across the Mexican border to “El Otro Lado” (The Other Side) in pursuit of the American dream, Reyna and her siblings are forced into the already overburdened household of their stern grandmother. When their mother at last returns, Reyna prepares for her own journey to “El Otro Lado” to live with the man who has haunted her imagination for years, her long-absent father.

Funny, heartbreaking, and lyrical, The Distance Between Us poignantly captures the confusion and contradictions of childhood, reminding us that the joys and sorrows we experience are imprinted on the heart forever, calling out to us of those places we first called home.

The Other Wes Moore

The 2014-2015 selection was The Other Wes Moore: One Name, Two Fates, by Wes Moore. The Other Wes Moore is not just a story of two young men who grew into two very different men but it is a story of the life circumstances they shared and the different choices made that destined one to become a Rhodes Scholar and the other to prison for the rest of his life. In this book, author Wes Moore tells the fascinating story of another Wes Moore—a man who shared his name and much of his personal history. About the same age and raised in the same neighborhood by a single mother, this "other Wes Moore" arrived at a starkly different fate: he now serves a life sentence without parole on murder charges. Compelled by their similar upbringings, Moore penned his book in an effort to discover how small choices make big differences in life.The committee selected this compelling story in the hope that it will lead students to ask important questions about choices they make

Good Kings Bad Kings follows the lives of residents at ILLC, an institution for juveniles with disabilities, where friendships are forged, trust is built, and love affairs begin, all despite an atmosphere of neglect and abuse. In this alliance the residents of ILLC ultimately find the strength to resist their mistreatment and fight back. With humor and an authentic eye, Good Kings Bad Kings tells the story of their struggle for dignity and self-determination.

Little Princes: One Man's Promise to Bring Home the Lost Children of Nepal

Grennan's book chronicles his journey to Nepal as a 29-year-old volunteer in the Little Princes orphanage, where he discovers that the children there are victims of human trafficking. Awakened to the children's dire circumstances, he commits to making a difference by reuniting them with their parents. Grennan's ambitions are complicated by the ongoing civil war and by the harsh mountain landscape of Nepal. The book is at once a gripping adventure narrative and a tale of deep personal transformation. Like other One Book selections, Little Princes will provide opportunities for discussion of many pressing contemporary issues.

Hotel on the Corner of Bitter and Sweet

Set during one of the most conflicted and volatile times in American history, Hotel on the Corner of Bitter and Sweet is an extraordinary story of commitment and enduring hope. In Henry and Keiko, Jamie Ford has created an unforgettable duo whose story teaches us of the power of forgiveness and the human heart

The Unforgiving Minute is the extraordinary story of one soldier’s singular education. From a hilarious plebe’s-eye view of the West Point experience to the demanding leadership crucible of Ranger School’s swamps and mountains, to a two-year academic whirlwind at Oxford, Mullaney’s winding path to the battlegrounds of Afghanistan was unique and remarkable. Despite all his preparation, the hardest questions remained. When the call came to lead his platoon into battle and earn his soldiers’ salutes, would he be ready? Was his education sufficient for the unforgiving minutes he’d face? The Unforgiving Minute is, above all, an unforgettable portrait of a young soldier grappling with the weight of his hard-earned knowledge while coming to grips with becoming a man. (Booklist Review).

Rooftops of Tehran
by Mahbod Seraji

This stunning literary debut paints a vivid portrait of growing up, discovering love, and awakening to the reality of life in a nation on the verge of revolution in the 1970s. Rooftops of Tehran opens in a middle-class neighborhood in Iran’s sprawling capital city. The rooftop of the narrator’s house – the tallest in their alley − is the perfect spot for sleeping on hot summer nights. It’s also the perfect location for stargazing, sneaking cigarettes, talking about American movies, and confiding, analyzing and agonizing through the typical trials of being a seventeen year-old boy, including being in love.

This is the spot from which the narrator quietly watches his secret love, his beautiful next door neighbor Zari, promised since birth to his friend and mentor, nicknamed Doctor, a man adored and respected by the whole neighborhood. It is from this high perch that the narrator witnesses the SAVAK's brutal hunt and arrest of Doctor and realizes the oppressiveness of the regime under which he resides. And the rooftop is where the narrator and Zari ultimately find quiet refuge in each other after the shock of Doctor’s senseless faith ripples through their close-knit community and brings about terrible, unexpected repercussions.

The Glass Castle
by Jeannette Walls

The Glass Castle is a remarkable memoir of resilience and redemption, and a revelatory look into a family at once deeply dysfunctional and uniquely vibrant. When sober, Jeannette's brilliant and charismatic father captured his children's imagination. teaching them physics, geology and how to embrace life fearlessly, But when he drank, he was a dishonest and destructive. Her mother was a free sprit who abhorred the idea of domesticity and didn't want the responsibility of raising a family.

The Walls children learned to take care of themselves. They fed, clothed, and protected one another and eventually found their way to New York. Their parents followed them, choosing to be homeless even as their children prospered. The Glass Castle is truly astonishing - a memoir permeated by the intense love of a peculiar but loyal family.

Left To Tell
by Immaculèe Ilibagiza

Immaculee Ilibagiza grew up in a country she loved, surrounded by a family she cherished. But in 1994 her idyllic world was ripped apart as Rwanda descended into a bloody genocide. Immaculee's family was brutally murdered during a killing spree that lasted three months and claimed the lives of nearly a million Rwandans. Incredibly, Immaculee survived the slaughter. For 91 days, she and seven other women huddled silently together in the cramped bathroom of a local pastor while hundreds of machete-wielding killers hunted for them. It was during those endless hours of unspeakable terror that Immaculee discovered the power of prayer, eventually shedding her fear of death and forging a profound and lasting relationship with God. She emerged from her bathroom hideout having discovered the meaning of truly unconditional love—a love so strong she was able seek out and forgive her family's killers. The triumphant story of this remarkable young woman's journey through the darkness of genocide will inspire anyone whose life has been touched by fear, suffering, and loss. This is Immaculee's first book.

In the tradition of 1959's To Kill a Mockingbird, Blood Done Sign My Name is a classic work of conscience, a defining portrait of a time and place that we will never forget. Published in 2004, Tim Tyson's riveting narrative of that fiery summer and one family's struggle to build bridges in a time of destruction brings gritty blues truth, soaring gospel vision, and down home humor to our complex history, where violence and faith, courage and evil, despair and hope all mingle to illuminate America's enduring chasm of race.

The Kite Runner
by Kahled Hosseini

Set both in Afghanistan and in California, the plot engages you from the first page. The book gives a powerful perspective on some of the most pressing national issues of our day. At the same time it raises important personal questions having to do with friendship, loyalty, prejudice, and intercultural communication. It is particularly relevant to the experience of our students, which is why it is a best seller in college bookstores across the nation.