While you are watching the Tokyo 2020 Olympics on your TV or streaming it on your favorite device, there’s a good chance a Villanova student is playing a role behind the scenes.

There are currently three Villanova students serving as interns with NBC Sports for the Summer Olympics: Emma Gudino, ’23 CLAS, Taryn Twohig, ’22 VSB and Alex Whang, ’22 CLAS. All were originally scheduled to serve as interns before the 2020 Olympics was postponed because of the pandemic. The opportunity still came—just a bit later than expected. Gudino and Twohig are located at NBC Sports headquarters in Stamford, Conn., while Whang is on-site in Tokyo.

The three Villanovans share some of their experiences during the Olympics.

“My freshman year at Villanova, I decided I wanted to minor in Japanese because I had grown up in Tokyo and speak fluent Japanese. Dr. Masako Hamada, EdD, associate professor emerita of Japanese Studies, convinced me to make my own major. So right now, I’m majoring in Japanese—a major I created—and economics. I’m also minoring in business and sustainability. Dr. Hamada approached me about the opportunity to intern with NBC Sports in Tokyo midway through my first semester as a freshman.”

“My official title is Digital Production Assistant. I’m working with a team that’s creating news shows that get sent out to Apple, Comcast, Google and NBC’s YouTube channel. The highlights from the competitions are usually the top running story on Apple News.”

“This opportunity was really cool because I was growing up in Japan during the bidding and campaigning process. When Japan was awarded the 2020 Olympics, there were posters everywhere. Growing up, that’s all I had seen. When I got this opportunity, it was a full-circle moment. I was disappointed I couldn’t go back to Tokyo, but once I got here to Stamford, I realized how cool it is to be at the center of what everyone is watching on TV.” 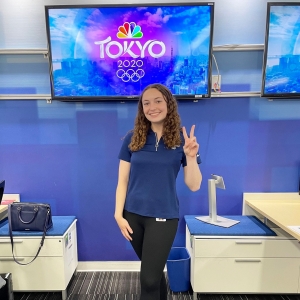 “I started my internship with NBC Sports on June 1. They taught us how to setup the livestreams that you see on the NBC Sports platforms—your desktop, phone, Roku or anywhere else you would use streaming. The work is more behind the scenes—where you set up the stream and gather the source where the video is coming from—and then monitor the stream to make sure that it’s playing smoothly on all the various platforms. We were previously doing streams for NASCAR, golf tournaments, Phillies games and basically any sport that you can think of that NBC Sports airs.

“During the Olympics, I’m working 12-hour shifts from 7 p.m. to 7 a.m. During the three weeks of the Olympics, there are more than 1,600 streams. The work is the same in terms of setting up the streams and monitoring them, but it’s an adjustment with the volume of streams I have been working on at once and the time of day I have been doing it.”

“I have always wanted to work for NBC. I’m the vice president of Villanova Television and have worked on the Special Olympics Fall Festival videos, so I was really interested in this opportunity. This internship has been a longtime coming. I had originally applied in September 2019 during my sophomore year. I found out that December that I got the internship, but was crushed once the games were postponed.” “NBC had us fill out an interest form when the Games were rescheduled and, of course, I still wanted to do it. I kept my hopes up that they would still be able to take me in. In February 2021, they let me know there was still a position for me. I’m super excited to be here and it was well worth the wait.” 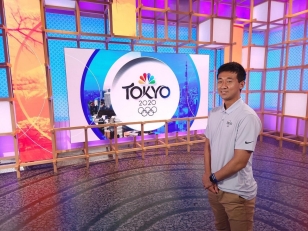 Alex Whang, ’22 CLAS, is interning for NBC Sports at the International Broadcasting Center in Tokyo.

“I am working in Control C at the International Broadcasting Center in Tokyo, which does the profiles and features at NBC Sports Group. I’m working with operations in that department, so it’s been a good time understanding what goes into a production.”

Alex spoke with the Office of Undergraduate Studies prior to starting his internship about the excitement leading up to heading to Tokyo this summer. You can read that story here.

Two other Villanova alumni are also a part of the action in Tokyo during the Olympics.