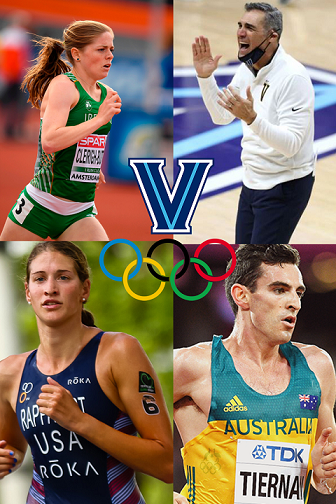 VILLANOVA, Pa.—A longstanding tradition continues this week when the latest chapter of Villanova's incredible Olympic story begins in Tokyo, Japan. Three former Wildcats will represent their countries in the Olympics – triathlete Summer Rappaport (United States) along with track & field athletes Siofra Cleirigh Buttner (Ireland) and Patrick Tiernan (Australia). In addition, Villanova men's basketball head coach Jay Wright is an assistant coach for Team USA. Tiernan will be competing in his second straight Olympics while the other three Villanovans are each Olympians for the first time.

The 2020 Summer Olympics, officially the Games of the XXXII Olympiad and branded as Tokyo 2020, run from July 23 through August 8 in Tokyo, Japan. The celebration kicks off with opening ceremonies on Friday, July 23 and formally conclude with a closing ceremony on Sunday, August 8.

Villanova now has a total of 66 Olympians with Rappaport, Cleirigh Buttner and Wright joining the University's all-time list. There has been at least one Villanovan in every Summer Olympics since 1948, with the group representing 15 countries and four continents while competing in nine different sports. The tradition started more than a century ago when James O'Connell competed in the 1908 Olympics in London. There have been 15 medal winners along the way, including 10 gold medalists and five silver medalists.

Below are profiles of each of Villanova's four Olympians in Tokyo along with their schedules of competition.

When she arrived on campus in 2014, Cleirigh Buttner became a part of the Irish Pipeline of track & field athletes who have come to Villanova for more than 70 years. There are more than 30 members of that pipeline and Cleirigh Buttner is one of the standouts from the group after a collegiate career which saw her become a seven-time All-American and a 10-time BIG EAST champion. She finished as high as second in the 800 meters at the indoor NCAA Championships her senior year and tallied three top-eight individual NCAA finishes during her career.

Cleirigh Buttner has continued to excel and take her career to new heights since graduating from Villanova in 2018. Already this year Cleirigh Buttner has set an Irish record in the 800 meters (2:00.58) at the American Track League meet in Fayetteville, Ark. in February, competed at the European Athletics Indoor Championships in Poland and tallied a personal best mark of 4:09.67 in the 1500 meters at the New Balance Indoor Grand Prix in New York. Cleirigh Buttner was one of the favorites in the 800 meters at the Irish Life Health National Senior Championships last month and won the silver medal.

Summer (Cook) Rappaport was a four-year member of the Villanova swimming & diving team and a two-year member of the cross country and track & field teams. She earned top-eight finishes at the BIG EAST Championships as a swimmer all four years of her collegiate career while competing in the distance events and went on to earn All-BIG EAST and Mid-Atlantic All-Region honors in cross country. Her top finish on the track was a fourth place showing in the 5000 meters at the outdoor BIG EAST Championships.

Following the conclusion of her collegiate career, she joined the USA Triathlon Collegiate Recruitment Program and began competing as an elite triathlete in March 2014. She was the first athlete to qualify for the 2020 U.S. Olympic Triathlon Team. In 2019, Rappaport qualified for the Olympics with a fifth place finish at the Tokyo ITU World Olympic Qualification Event held at Odaiba Marine Park in Tokyo. Three days later she teamed with three others to earn a bronze medal in the ITU World Mixed Relay Series event. Rappaport also won a silver medal at the Cape Town ITU Triathlon World Cup in February 2019. She began the 2021 season with a sixth place finish at the Europe Triathlon Cup Melilla on April 18 and earned a silver medal at the World Triathlon Championship Series in Yokohama, Japan on May 15. Her most recent competition came on May 23 when she came in ninth at the World Triathlon Cup Lisbon.

Tiernan becomes the 22nd Villanovan to compete in multiple Olympics as he represents Australia for the second time. He made his Olympics debut in 2016 in Rio de Janeiro and competed in the 5,000 meters. He is qualified for both that event as well as the 10,000 meters in Tokyo. Back in 2016, Tiernan was the first Villanova student-athlete to compete in the Olympics while still enrolled in school since American swimmer Maddy Crippen in 2000. Tiernan was the first track & field athlete to achieve that distinction since women's distance runner Vicki Huber in 1988. Tiernan enjoyed a sensational year in 2016, as he competed in the Olympics in August and was the individual NCAA cross country champion in November.

As a collegian, Tiernan became the first Villanova men's runner since 1964 to win a national title in cross country. He was an eight-time All-American and an 11-time BIG EAST champion during his Wildcats career, and he remains the only men's athlete in BIG EAST history to win four consecutive conference cross country titles. Tiernan earned four career All-America honors in cross country and four in the 5000 meters on the track, finishing as high as third at the outdoor NCAA Championships in 2016. He goes into Tokyo 2020 with lifetime best marks of 13:12.68 in the 5,000 meters and 27:22.55 in the 10,000 meters.

Wright is the third Villanovan to coach in the Olympics, joining George Raveling and longtime swimming coach Frank Keefe. Raveling was a Team USA assistant coach at the 1984 Olympics in Los Angeles and the 1988 Olympics in Seoul. Keefe was an assistant coach for the United States in 1984 and a team manager in 1988 who went on to coach swimmers from the Virgin Islands and Bermuda in 2000.

Wright was announced on October 11, 2018 as an assistant coach for the USA Men's National Team, assisting USA and San Antonio Spurs head coach Gregg Popovich with the USA National Team which included the 2019 FIBA World Cup in China and the Summer Olympic Games in Tokyo. Wright owns a variety of prior USA Basketball coaching experiences as a head coach or assistant coach. He led the USA to an 8-0 record and a gold medal at the 2005 World University Games as head coach and was an assistant coach for the 2000 World Championships for Young Men Qualifying Tournament team that finished 4-1 and won the silver medal.

Wright coached a USA Basketball team of collegians in the 2007 Pan American Games to a fifth place finish and served as co-head coach of the 2010 USA Select Team that trained with the 2010 USA World Cup Team. He returned as Popovich's assistant coach for he 2016 USA Select Team that trained with the 2016 U.S. Olympic Team. Wright also served as Popovich's assistant coach durin the 2018 USA Men's National Team minicamp, and the 2019 World Cup.

In 20 seasons as Villanova's William B. Finneran Endowed Head Coach, Jay Wright has guided the Wildcats to new heights, including NCAA national championships in 2016 and 2018. On May 16, 2021 it was announced that the1983 Bucknell University graduate will be inducted to the Naismith Memorial Basketball Hall of Fame as part of its Class of 2021. Villanova has posted 233 victories in the past eight seasons, an average of 29.1 per year. In 2020-21 the Wildcats posted an 18-7 overall record and captured their seventh BIG EAST regular season crown since 2013. In January 2020 Wright was named the Associated Press men's college basketball Coach of the Decade.