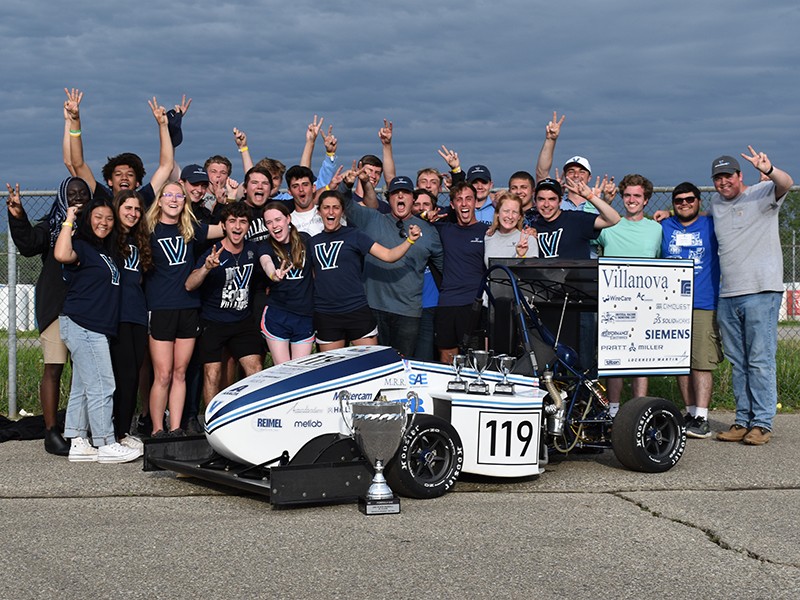 The Villanova University Formula SAE team, NovaRacing, cruised to its best-ever finish this weekend in the annual competition at Michigan International Speedway, finishing second overall in a field of 99 collegiate teams from around the world.

NovaRacing’s car, which was built by more than 40 Villanova students over the past academic year, also took first place in fuel economy, second in endurance and third in acceleration while placing in the top 10 for design—a first for the team in its 13 appearances at the national Formula SAE competition. Twenty-eight Villanova students, including four student drivers, traveled to Brooklyn, Mich., for the annual event, led by team co-captains Michael Blaney ’22 ME and Christina Maffattone ’22 ME. 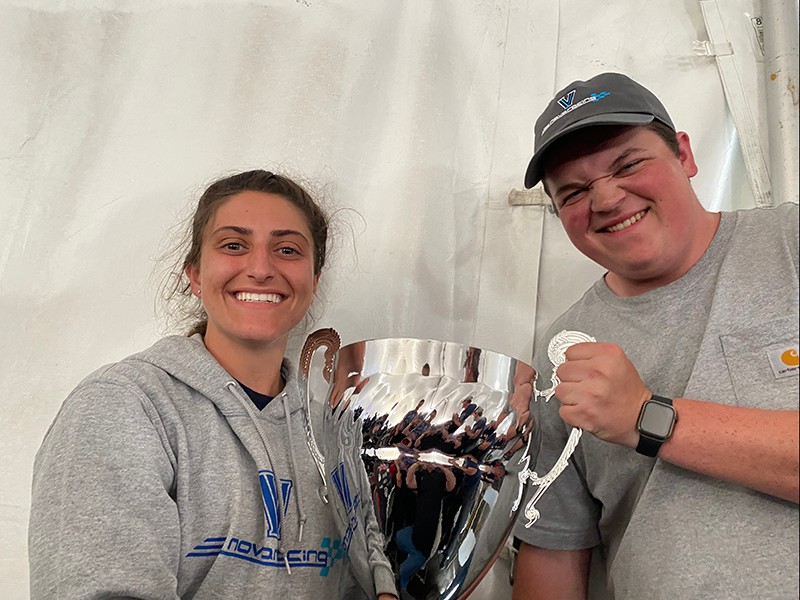 Co-captains Christina Maffattone ’22 ME and Michael Blaney ’22 ME celebrate the team’s success.

Blaney said he couldn’t be prouder of the team than after this competition, in which NovaRacing finished as runner-up to the overall champion, the University of Illinois Urbana-Champaign. “Our results are the culmination of 15-plus years of hard work, passion and dedication from team members,” Blaney said. “It’s an incredible feeling to see NovaRacing succeed on such a high level of competition, and I know the best is still to come as the team continues to innovate and develop a superior vehicle year after year.”

Sponsored by SAE International (formerly known as the Society of Automotive Engineers), Formula SAE competitions challenge student teams to design, build, test and demonstrate a formula-style racecar. The vehicle is then judged in several static and dynamic events, including cost, presentation, autocross and acceleration.

Although Formula SAE has its roots in engineering, as a University-level student organization, NovaRacing attracts members from across campus, including the College of Liberal Arts & Sciences and the Villanova School of Business, in addition to the College of Engineering.

George Simmons, director of Villanova’s Multidisciplinary Design Laboratory who has traveled with NovaRacing to the Michigan competition since May 2011, said the team set a goal of a top-10 finish after placing 11th last year. “We were shocked and amazed that we placed second,” he said. “Getting this far is a testament to the team’s knowledge, planning, determination, attention to detail, hard work, team spirit and competitive nature.”

Dr. Jones also praised the leadership of Blaney and Maffattone in guiding the NovaRacing team. In his last meeting with them before the Michigan event, the co-captains described their decision to use an older practice engine in competition as opposed to a new engine. Their reasoning? Mechanical things fail most often when they are very old or very young.

“They didn’t want to chance a failing new engine, so they decided to use the one already in the car that was performing well at the time,” Dr. Jones said. “This was a smart, mature decision and the essence of a successful Villanova Engineering education.

“They make us proud.”