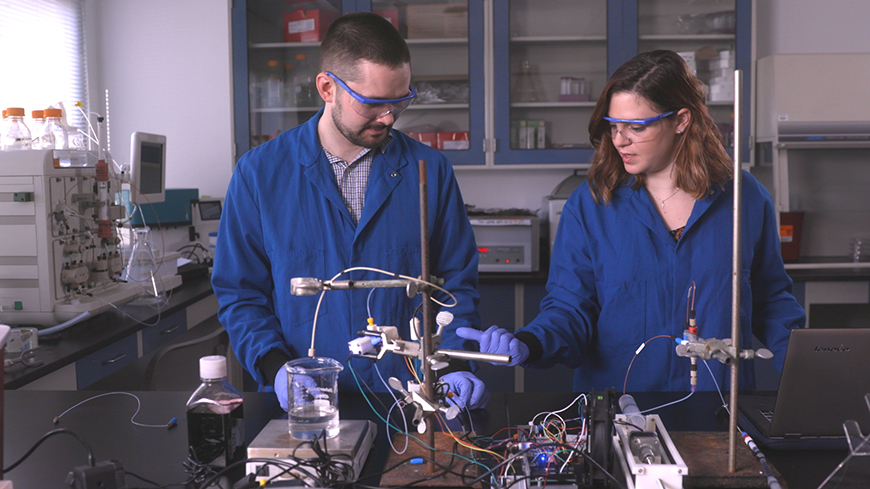 In 2015, a challenge posted on the crowdsourced innovation website InnoCentive.com caught the attention of Villanova University’s Dr. Jacob Elmer, associate professor of Chemical Engineering. On the InnoCentive website, a “Seeker” (a company, government agency or nonprofit organization) can offer a prize to the general public (“Solvers”) for solving a problem (“Challenge”) that is in need of a “Solution.”  In this case, a Seeker was offering $25,000 for a device that could continuously measure the blood content in a small volume of saline solution within a thin, flexible probe. The challenge specified a variety of experimental conditions and solution requirements, and Dr. Elmer, given his expertise in the field of hemoglobin and blood substitute research, decided to form a team of students to tackle the problem.

“Using a peristaltic pump and a 3D-printed cylindrical flow cell photometer with a light and photoresistor allowed us to measure the red blood cells concentration in the solution,” says Dr. Elmer. Without divulging too many details, he explains that the system involves a simple Arduino microcontroller, which allows key measurements to be displayed on a computer, enabling the user to determine the RBC concentration at any time. The team’s device cost less than $400.

“We thought that ours represented an ideal solution for this challenge, since it was inexpensive, highly precise, consistent and easy to operate,” notes Dr. Elmer. He credits 2016 Computer Engineering alumnus William Landis for helping to design the original device, and recognizes current undergraduates Brianna Conte ’19 EE and Neill Boyce ’20 ChE for seeing the project through to completion.

A year after submitting their solution, Dr. Elmer and his team were named one of three finalists out of the 300 “Solvers” who had participated in the challenge. The next step in the process was to provide a prototype of the device they proposed, and in 2017, they learned they had won. Finally, in 2018, the team received the $25,000 prize for their winning device. In October, they published a manuscript describing the device —“Design and Application of 3D-Printed Photometers Controlled with an Arduino” —which will appear in an issue of the journal 3D Printing and Additive Manufacturing later this year. Dr. Elmer also adapted the project into an EGR1200 mini-project, in which freshmen students are challenged to build their own version of a photometer from scratch to monitor an enzymatic reaction.

A note to Villanova faculty and students: Before entering any challenges similar to those found on the InnoCentive site, be certain to contact the University’s Office of Grants and Contracts. They are able to guide you through important legal steps that must be taken before signing terms of agreement.