A Conversation with The Honorable John Kerry at Villanova University 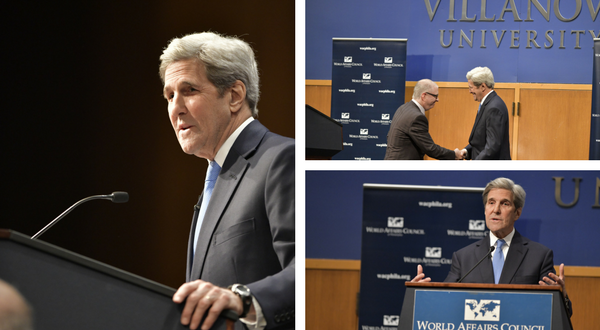 VILLANOVA, Pa., March 28, 2018 – The World Affairs Council of Philadelphia and the Elenore and Robert F. Moran Sr. Center for Global Leadership at Villanova School of Business (VSB) hosted John F. Kerry, 68th Secretary of State, Presidential candidate and former US Senator from Massachusetts to discuss the future of US diplomacy and leadership with students and members of the Villanova community on Tuesday, March 27.

As the Secretary of State under the Obama Administration from 2013–2017, Kerry has a deep understanding of the internal processes of the White House, as well as domestic and international affairs. Despite the political turmoil highlighted in the news, he presented his optimistic path for the future of diplomacy and leadership.

In his speech, he emphasized the importance of restoring the public’s faith in government. “Restoring trust in our government will make the government work toward making lives better for everyone,” said Kerry.

“We were honored to host The World Affairs Council, The Honorable John Kerry and hundreds of members of the Villanova community here at Villanova,” said Jonathan Doh, PhD, Herbert G. Rammrath Endowed Chair in International Business, Associate Dean of Research, and Faculty Director, VSB’s Moran Center for Global Leadership. “At Villanova, we believe it is critical to facilitate lively discussion about issues that impact our country and our world, and we are fortunate to hear Kerry’s perspective on these matters.”

This event was sponsored by the Moran Center for Global Leadership and JP Morgan Chase & Co., with co-sponsorships from VSB, College of Liberal Arts and Sciences, VSB Graduate and Executive Programs, the Center for Business Analytics, the Center for Irish Studies and the Albert Lepage Center for History in the Public Interest.

“Hearing from Kerry allows our students to expand their knowledge of the state of our world today,” said Kim Cahill, director, Moran Center for Global Leadership. “We place importance on exposing VSB students to these issues in order to foster awareness of how they can positively impact the world.”

Kerry graduated from Yale University with a Bachelor of Arts degree in 1966, and upon graduation, served in the United States Navy from 1966 – 1970. He received his JD from Boston College Law School in 1976. From 1983 – 1985, Kerry served as Lieutenant Governor of Massachusetts, until his election into the Senate. In addition to five terms served as a Massachusetts Senator, Kerry was the Democratic presidential nominee in the 2004 election against President George W. Bush. During his term as Secretary of State, he was a key architect of the Paris Climate Accord, and was the first US Secretary to meet with Iran’s Foreign Minister since the Iranian Revolution in 1979. Kerry officially retired from diplomatic work at the end of his term with the Obama administration, but has maintained an active political voice, sharing his thoughts and viewpoints on a variety of policies presented by the Trump administration.

The Villanova School of Business (VSB) undergraduate program is ranked #1 in the nation by Bloomberg Businessweek and has been at the forefront of business education since it was founded in 1922. The VSB part-time MBA program is ranked #12 in the nation by Bloomberg Businessweek. VSB also offers Executive and Online MBA programs, as well as a Master of Finance and Master of Accounting with Data Analytics, and our #1 ranked online grad programs by U.S. News & World Report, the Master of Science in Analytics and Master of Science in Church Management. Serving over 2,500 undergraduate and graduate students, VSB is known for academic rigor; creativity and innovation; hands-on and service learning opportunities; a firm grounding in ethics; and an applied education that prepares students to become outstanding leaders and global citizens within the global, complex, and fast-paced world of business. For more, visit business.villanova.edu.

Developing business leaders for a better world.®
The Villanova School of Business is a premier educational institution that offers undergraduate programs, graduate programs and executive education. Founded in 1922, VSB is known for academic rigor; creativity and innovation; hands-on and service learning opportunities; a firm grounding in ethics and an applied education that prepares students to become outstanding leaders and global citizens within the ever-changing, complex, and fast-paced world of business.