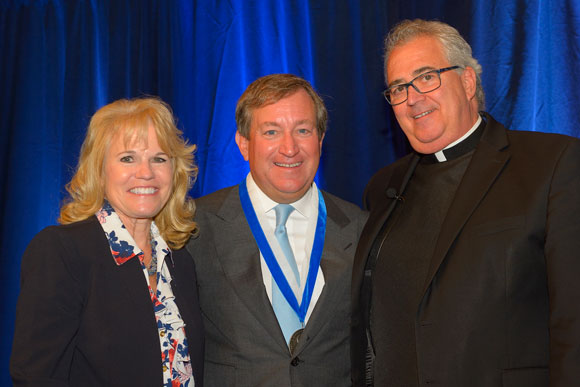 Villanova, Pa., October 11, 2017 - The Villanova School of Business (VSB) honored Terence M. (Terry) O’Toole ‘80 VSB as the 2017 recipient of The Rev. Joseph C. Bartley, OSA Alumni Medallion. The Bartley Medallion is awarded annually to recognize alumni who have distinguished themselves in their careers while also demonstrating extraordinary service to their communities and to VSB. This award is the highest distinction the school can bestow to an alumnus/a.

O’Toole’s professional career has been defined by his drive for business excellence. He has been an investor, primarily in private companies, since becoming one of the founders of the Principal Investment Area (PIA) at Goldman, Sachs & Co. in 1989. He became a partner at Goldman Sachs in 1992, served on the Investment Committee of Goldman Sachs from 1992 until 2004, and was the chief operating officer of PIA upon his retirement in 2004.

In 2005, O’Toole joined Tinicum Inc. and served as the co-managing member of several of its investing partnerships. In 2016, he established Macanta Investments LLC as the primary investing vehicle for his family.

“As a proud VSB alumnus, I am honored to receive the 2017 Bartley Alumni Medallion and join the impressive group of its past recipients,” said O’Toole. “The Villanova School of Business provided me with the ethical leadership skills I have used throughout my professional career and I will forever be grateful.”

O’Toole remains an ardent supporter of Villanova University, serving as the chair of the Board of Trustees of Villanova from 2011 to 2012, and endowing the VSB deanship in honor of his parents, Helen and William O’Toole in 2007, thus supporting VSB’s vision as a premier business school built upon outstanding faculty and academic quality. He has also served as a member of the Capital Campaign Organizing Group, Steering Committee, Chairman’s Task Force and the VSB Dean’s Advisory Council. Currently, he serves as the co-chair of Villanova’s capital campaign, and is also the co-chair of the O’Toole Family Foundation (www.otoolefoundation.org).

The Bartley Alumni Medallion was presented to O’Toole at the Villanova Business Leaders Forum, which took place on October 5, 2017. This year’s Forum - Creating Sustainable Value: Building Brands, Growing Talent, Delivering Results  - examined how organizations can best generate sustainable value for their many stakeholders in the long term.

The Villanova School of Business (VSB) undergraduate program is ranked #1 in the nation by Bloomberg Businessweek and has been at the forefront of business education since it was founded in 1922. Serving over 2,700 undergraduate and graduate students, VSB is home to five Centers of Excellence (the Daniel M. DiLella Center for Real Estate, the Center for Business Analytics, the Center for Global Leadership, the Center for Marketing & Consumer Insights and the Center for Church Management) with each designed to foster innovative, cross-disciplinary research and teaching opportunities for business faculty. VSB is known for academic rigor; creativity and innovation; hands-on and service learning opportunities; a firm grounding in ethics; and an applied education that prepares students to become outstanding leaders and global citizens within the ever-changing, complex, and fast-paced world of business. For more, visit business.villanova.edu.

For immediate assistance with any media query, please contact:

Click here to view the Faculty Expertise Guide for the Villanova School of Business.

Developing business leaders for a better world.®
The Villanova School of Business is a premier educational institution that offers undergraduate programs, graduate programs and executive education. Founded in 1922, VSB is known for academic rigor; creativity and innovation; hands-on and service learning opportunities; a firm grounding in ethics and an applied education that prepares students to become outstanding leaders and global citizens within the ever-changing, complex, and fast-paced world of business.