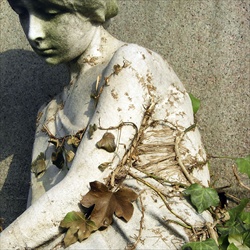 Villanova, PA — 'Visions Four', an exhibit showcasing the diverse works of four artists, opens in the Villanova University Art Gallery on Friday, October 21. A free public reception to meet the artists — Elsa Johnson, Kristine Marx, Diane Pepe, who organized the show, and Karen Saler — will take place on October 21, from 5 to 7 pm in the Gallery on the Villanova campus.

The four artists' visual arts repertoire encompasses painting, printmaking, drawing, sculpture, photography, and collage. Each has studied and/or worked abroad. Informed by the art traditions of several cultures, their frequently honored work has been widely exhibited in the United States and around the world.

Pepe's sculptural structures bear a strong Japanese influence. Almost all of Saler's art is drawn from her abiding interest in Italian life and culture. Noted for her video installations and abstract drawings, Marx works frequently in Berlin and travels extensively in the pursuit of her art. Johnson acknowledges the impact of studio work in India upon her sculpture.

Each also has deep roots in Philadelphia. All are, or have been, on the faculty of The University of the Arts in Philadelphia. “'Visions Four' is partly about four women not bound by a single art form, but who create strong images in a variety of media,” says Pepe.

For the Villanova exhibit, Elsa Johnson presents small-scale seascapes of the changing tides, and seasonal lighting and colors of Cape Cod. She also offers images of marionettes that she constructed, and modeled, and photographed in beach, woodland, and marsh settings.

“Marionettes have the potential to be very expressive,” says Johnson. “I've found that if I photograph them in the right natural setting, they convey my own responses to some of the subtleties in nature.” In one photo, a marionette is posed in stride just past a dead sea bird on the beach. The downward cast of the construction's realistically formed head and the tentative positioning of its finely articulated hands imply a tension and hesitation one might feel in such a situation.

Johnson's interest in the human form is also reflected in her work in figurative ceramic and bronze sculpture, which are influenced by her experiences in India and Japan. Johnson recently returned from a sabbatical to The University of the Arts, where she is a professor in the College of Art and Design. She divides her time between Philadelphia and Cape Cod and is active in both art communities. She has been awarded a residency in art for the Cape Cod National Seashore. Her work has been exhibited in the United States and internationally.

Where Johnson's art is figurative, Kristine Marx's metier is abstraction, which she carries out in watercolors, drawings, photography and video installations. Marx's contribution to the exhibit will include abstract watercolors and ink drawings that offer illusion.

“My work is concerned with boundaries and space,” says Marx. “In my drawings and watercolors, the edge of the paper becomes the boundary which the imagery plays against.”

Some of her exhibited drawings relate to her video work, others to an appreciation of the delicate intricacies of the architectural sculpture of Hindu temples. Small line prints included in the exhibit reflect her interest in miniatures of India.

Marx has won residencies, scholarships, and awards from the Experimental Television Center in Owego, NY; the Kolin Ryynanen Center for Arts and Culture in Koli, Finland; the Goethe Institute in Berlin, and The Bronx (NY) Museum of the Arts. She has also won support to study Hindu temple sculpture in Indonesia. Marx studied at Hunter and Sarah Lawrence Colleges, and has been on the faculty at Hunter and Parsons School of Design, and has lectured at The Whitney Museum of American Art. She resides and works in Philadelphia, New York City, sometimes Berlin.

Diane Pepe uses wood and brass rods to make vertical sculptures into which she places time- and water-worn stones, which sometimes spill over their containment structures. The artist's earlier three-dimensional constructions investigated “human interactions based on impressions of the Japanese culture and people.” Her later sculptures focus on “the dichotomy between the emotional side of human nature (the stones) and the structured elements (the wood elements) that we bring forward to control these emotions.” Her use of wood and stones reflects the artist's reverence for nature's beauty.

The artist views her two-dimensional cut paper constructions as “collages that investigate the concept of 'conversations' and spatial relationships.” By blending paper layers, each with its own discreet image, Pepe's virtual constructions convey subtle qualities of light and implied movement.

Pepe's numerous grants include an Arts in Education Fellowship funded by the National Endowment for the Arts, The Getty Center in the Arts, and the Pennsylvania Council on the Arts. She has been widely exhibited in solo and group exhibits across North America and internationally.

Karen Saler's two years living at the American Academy in Rome while on a Rome Prize Fellowship changed her art and her life. “Living in Italy after graduate school (at the Maryland Institute College of Art) made me aware of a differently textured environment that has altered my aesthetic sensibility,” she says.

Saler, whose studio experience was primarily in painting and drawing, recently has been exploring digital media. She sometimes uses drawing and painting combined with inkjet prints to produce mixed media works. Her works in the exhibit will include four photo essay books and images mostly about Italy, for which she bears an enduring appreciation. 'Requiem Aeternam' (Mass of the Dead), which she calls her cemetery book, was computer generated by the artist from design to finished product. Intended as an artists' book rather than commercial venture, only a few copies were crafted.

Her three other exhibited artist books are 'little Italy', offering images taken in a number of Italian cities; 'Morocco', a visual essay of her 10-day journey to that North African nation; and 'Adoornamenti', a small paper-bound book that displays richly expressive door ornaments of Venice and Prague.

In 2009, Saler returned as visiting artist to the American Academy in Rome, where 30 years earlier she had been on her fellowship.

'Visions Four' continues to Monday, December 5. All exhibits at the Art Gallery are free and open to the public. On-campus parking is also free and usually convenient. The Art Gallery is open weekdays from 9 am well into most evenings. For extended and weekend hours, and other information, telephone the Art Gallery at (610) 519-4612. Selected works from the 'Visions Four' exhibit may be previewed at www.artgallery.villanova.edu.