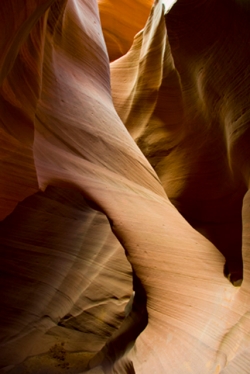 Villanova, PA – Paul S. Wilson remembers a conversation he had a half century ago in a car with Alexey Brodovich, legendary visual image designer whose genius changed the mid-20th century face of American magazines.
Brodovich said that “each photographer must look into his own soul and escape the boredom he sees in the images around – he must innovate and look ahead.” At the time, Wilson was a student helping in Brodovich's New York Designer’s Workshop and on the threshold of his own cutting-edge visual design career.
How Wilson has applied that message of innovation as graphic designer, commercial and fine art photographer, filmmaker and Digital Age communicator may be seen in his upcoming exhibit at the Villanova University Art Gallery. “These Eyes: 50 years”, which opens Friday, February 25, presents samples of the Philadelphia artist's work in print, from his advertising layouts to his current digitally enhanced art. As a student of visual artists unafraid of using machines to push arts boundaries, he made the computer a graphic design tool at a time when having computers enhance art was not fashionable.
A free public reception to meet the artist and see the results of his man/machine collaboration will take place on Friday, March 11, from 5 to 7 pm in the gallery, located in the Connelly Center on the Villanova campus. Refreshments will be served. The exhibit continues to April 7.
The retrospective includes images of some of his famous clients (among others Jim Croce, Grover Washington, Jr., and Barnabas Collins); interpretive images of canyons, clouds, trees, rocks, fog, coastlines, and still lifes; St. Peter's Square at sunrise; and his ad layouts for Wanamaker's, Hot Foot shoes, and other commercial clients.

Wilson's interpretive images of an aspen valley near Santa Fe remind him of a Louis Comfort Tiffany stain-glass window, so he offers them in tribute to the master glass work artist. In another photo grouping, he probes the deep recesses of a yellow begonia. “I revel in the shapes and colors to be found in the micro world of a begonia,” he says.
One leading-edge digital accomplishment the exhibit cannot accommodate is the Internet virtual tour of The Vatican that Wilson carried out under the auspices of Villanova just prior to his retirement last year from the university. In brilliant color and intricate detail, the Web tour offers armchair visitors 360-degree, zoom-in, zoom-out views of the Sistine Chapel, St. Paul's Outside the Walls, St. John Lateran and St. Peter's Cathedral.
“It's a humbling thought that millions of people around the world who will never have the opportunity to travel there, may experience the remarkable art and architectural marvels of The Vatican from home,” says Wilson.
Looking back, Wilson considers it his good fortune to have been an aspiring artist in the early 1960s. With his paintings of the Campbell Soup can, Coca-Cola bottle, and other mass consumer products, Andy Warhol was giving birth to the pop art movement. Never before, had the American art scene been so popular or electrified.
“America was changing. Everything seemed possible in the early '60s. I was doing still photography and felt, if I can do still work, I can do film. And I did."
In addition to Alexey Brodovich, Wilson also tutored under noted Philadelphia lithographer Eugene Feldman. “As others used a paint or paintbrush, Gene used a four-color Harris offset printing press to create his own prints and books, as well as to print materials for the Museum of Modern Art, the Metropolitan Opera and the National Art Gallery,” Wilson says, adding:
“It's amazing to look at what we were doing then compared to what's being done today. Back then, photos came in a few standard sizes; now they can be as big as billboards. With the technology we had then, retooling a photo or a layout could take days; now it's done in hours or less. Film making was very expensive for the professionals; now, there are some 150 million films on U Tube.”

Wilson earned a master's degree in communication from the Annenberg School at the University of Pennsylvania and a bachelor's in economics from Penn's Wharton School of Finance and Commerce. He also studied psychology at Temple University and computer graphics at Bucks County Community College.
He worked as a communications research analyst for a major Philadelphia pharmaceutical company; implemented and managed a manufacturing operation for a printed circuit board manufacturing company in Puerto Rico; designed and launched a Cherry Hill, NJ, music/disco club.
In 1967 he opened Paul Wilson Studio in Philadelphia and New York, specializing in still life and video production. His work for major corporations and publications captured more than 30 Art Directors Club awards. In the mid-'80s, he established a successor company, Electro/Grafiks, Inc., which designed imaging systems for various computer manufacturers' platforms and assisted artists, advertisers and corporate communicators in solving their visual graphics problems.
Over the years, he has helped colleges, universities, government agencies, medical organizations and businesses install, upgrade and enhance electronic capabilities of their film, video, animation, imaging and graphic design systems.
As chair of the Moore College of Art's department of photography in the mid-1980s, Wilson focused on elevating photography's status in the college curriculum, while building awareness of photography's importance in career fields such as graphic design and commercial advertising.
At Villanova, which he joined in 2002, he served as digital media coordinator for the College of Arts and Science’s Communications Department, taught digital imaging production, and beginning and advanced film and video production. He supervised installation of live production control room and audio facilities, and designed and supervised digital editing workstations.
While his exhibit may be a retrospective, Wilson balances looking back with looking forward. Now that he's 'retired', he considers restarting set-aside plans to do a film of the Navajo people. He marvels at the democratizing impact that the digital revolution is having on communications, a global system driven by a worldwide market place that is constantly demanding the next best thing as soon as possible. While his exhibit may be an art history lesson of the recent past, he understands that the past is a place young people don't dwell on for very long.
“While I could bemoan a lack of interest on the part of students in not wanting to know from whence we came, as a teacher I try to keep from being critical of them for not wanting to know what I know.”
The Villanova University Art Gallery is open weekdays from 9 am to 5 pm. For weekend and extended hours, and other information, telephone the Art Gallery at (610) 519-4612. Selected works from the Wilson exhibit may be previewed on the gallery’s website at www.artgallery.villanova.edu.

Light from the Other Side Archival Inkjet Print, 14” x 14”