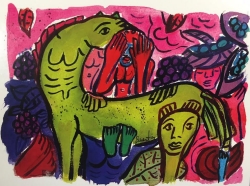 Villanova, PA- Should you have visited the Villanova University toward the end of October, 2008 and spied someone wearing an over-the-shoulders sandwich board hawking a fictional eater called "Joe's", know that it was actually a promo for Quentin Walter's real campus art exhibit.  Joe's is only a come-on: a second look will reveal a framed painting by the artist and the question "Do you own one?"  Ms. Walter believes that art--particularly hers--should be vigorously promoted.

To accompany the sandwich board as advertising icon of the Great Depression, Walter requested that the "Strait Sax" saxophone quartet that plays at the Villanova art receptions include in its repertoire such 1930's hard times songs as "I Guess I'll have to Change My Plan," "Body and Soul," "Lady Be Good," and "Get Happy."

Walter's exhibit/performance "Intimate Encounters: Mercedes Devereau, BUZZ X," which features 38 of her small (4.5" x 6.5") outré (i.e. exaggerated, eccentric, bizarre: Webster) watercolors, opened Friday, October 24, with a reception to meet the artist from 5-7 pm in the gallery in the Connelly Center on the Villanova campus.  Supported by the Pennsylvania Partners in the Arts, the regional arts funding partnership of the Pennsylvania Council on the Arts.

Walter's "marvelous blend of brilliant, saturated color and content" reflects the artist's deep affection for jazz and the imprint of regular visits years ago to Jamaica and Martinique, notes Dr. Lucinda H. Gedeon of the Vero Beach (FL) Museum of Art.

Walter readily acknowledges that she seeks more recognition for her work.  The "X" in her exhibit's title refers to "x" as the unknown factor in algebraic equations which she feels fits her perception as a comparatively unknown artist.  This self-assessment is somewhat belied by her resume, which shows a steady stream of exhibits over the years at home and abroad, and a selected list of more than 100 individual and institutional collectors of her work in the united States, South America, Europe, and Japan.

In addition, Walter has been accorded some of the art world's more prestigious acknowledgements, among them grants from the Pollock-Krasner (2000) and the Adolph and Esther Gottlieb Foundations (2008).  A seven-month visual arts fellowship at the Fine Arts Work Center in Provincetown, MA, in 1985 provided her the opportunity to forge her own unique artistic language.  "This gift of uninterrupted time was essential in allowing me to explore and develop my own outré vision," she says.

Still she strives: "I'm trying to break the glass ceiling and get a blue chip gallery to represent me.  I'm also looking for a patron.  I've been looking for 25 years and I'm not getting any younger."  She hopes that she will find an institution to accept her large body of work.

"It is supremely important to me to have the large body of work preserved.  Any artist who takes herself and her art seriously must be concerned for the legacy of her works," says Walter.

Walter feels that narrative forms an integral part of her paintings, and that there are as many interpretations of them as there are those who experience them.

"Owners of my work tell me they keep revisiting them," says Walter, a one-time Pennsylvanian who now calls Sebastian, Florida, home.  "It's not decorative; it has narrative.  It engages intellectual curiosity."  A curator familiar with the artist's paintings agrees.

Her work, writes Jennifer Bailey Forbes of the Vero Beach Museum of Art, "is a distinctly hybrid shock of color and narrative which speaks to the decorative quality of Near Eastern art, the stylized forms of the masks and sculptures of Africa, the bright colors of the French impressionists, and the simplified forms of French artist Paul Cezanne."

The "Mercedes Devereau" in the exhibit's title is Walter's alter ego, represented by an art nouveau mannequin she found in an antique store in Harrisburg, PA, during her Pennsylvania years in the 1980s and '90s.  Balanced against the always aspiring artist, the Devereau of Walter's paintings is a "pedigreed Yale MFA graduate, a dashing, talented, international art star."

Walter's Pennsylvania years hold a place in her art in other ways, as well.  The Susquehanna River, which passes her former Harrisburg home, "informed my land, river and sky motif."  A regular at capitol jazz clubs, the red high heel in her work was inspired by a blues song.  While in Harrisburg, Walter worked as assistant to the executive director of visual arts and crafts of the Pennsylvania Council on the Arts.

Childhood memories of her maternal grandfather's farm in Virginia are behind the horses in Walter's paintings.  Inspiration for their exaggerated form is Claes Oldenburg's 45-foot-high stainless steel "Clothespin" statue in downtown Philadelphia.

Florida's flora has had its impact, as well.  Her pod forms and pod people are drawn from the prickly, pod-producing Gray Nicker bush which flourishes along the Indian River Lagoon near her home.

Her art has formed the basis of her literary efforts.  Signed copies of her small satirical art book, Intimate Encounters, Mercedes Devereau, BUZZ X, were on sale at her Villanova installation.  Her other published works are Color the Burg, a coloring and aesthetic book, and Sketches of Jazz Artists, a calendar.  From Bethesda, MD, she holds a Bachelor of Arts degree from Western Washington University in Bellingham, WA.