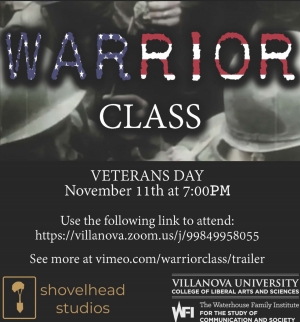 VILLANOVA, Pa. – Warrior Class, a new documentary produced by Villanova University students, focuses on three veterans from Philadelphia and their transition from service to civilian life. The film aspires to educate civilians about what it means to be a veteran, while shining a light on the complex issues many veterans face. The film will debut virtually on Veterans Day, Wednesday, November 11, at 7 p.m. The screening will be available via Zoom. A Q&A with the veterans will follow the screening.

Each of the three veterans have their own unique individual stories. Timothy Wynn, a Marine Corp veteran, was arrested within his first 24 hours of returning to the United States and struggled to stay outside of correctional programs. Through his transition, he learns how to deal with his issues and turns his life around, becoming a dedicated family man and mentor to fellow veterans. Erica Webster, a woman in the Army serving as part of the Military Police, struggles to grasp what it means to be a woman in service. Dealing with the problem of invisibility and having issues conforming to the civilian world, Erica’s journey sees her become a small business owner and charity organizer. Mike Woody, an infantry veteran in the Army, details the harsh racial treatment he endured from his superiors. Woody, a Villanova MBA graduate, also struggles to market himself with the skills he learned in the military to civilian life.

“We hope that the film brings attention to some very important veterans’ issues both on campus and in our community,” said Stephen McWilliams, PhD, MFA, director of the social justice documentary film course. “The students did an amazing job completing this film during the pandemic. The commitment to the project was an extraordinary effort.”

The Social Justice Documentary Film course is offered by the Department of Communication in Villanova’s College of Liberal Arts and Science. The course gives students an opportunity to create documentary films that spotlight a contemporary social justice issue. The class is made possible through the support of Villanova’s Waterhouse Family Institute for the Study of Communication and Society.