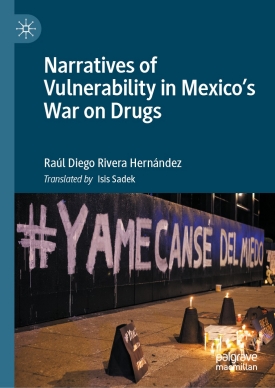 The cover of the book pictures a painted wall in front of the Attorney General’s office in Mexico City with the hashtag #YameCansé, or “Enough, I’m tired.” This message circulated Twitter on 2014 following the forced disappearance of 43 students of the Ayotzinapa Rural Teachers’ College in Iguala, Guerrero in September, 2014. While never solved, investigations found local, state, and federal government, police, military, and gang involvement.

This is just one of many instances of violence in Mexico. “The way state authority and criminal organizations are working together to impose fear is by disappearing persons,” said Diego Rivera Hernández, “People are disappearing for political reasons because of their type of activism, and other people have disappeared because they were in the wrong place at the wrong time.”

Diego Rivera Hernández also details throughout the book the violence toward journalists. He adds, “the killing of journalists has become normalized in Mexico, and the society has also been unable to defend the right of having truthful information.” Undocumented migrants are another subject of violence in the book because of their vulnerability while transiting through Mexico to the United States without state protection. “There is kidnapping, extorting, and sometimes recruiting of Central American migrants to become part of different criminal organizations,” Diego Rivera Hernández stated.

These victims are central to the story of the War on Drugs. Their unexplained disappearances have left families with unanswered questions and heartbreak. However, this injustice drives the fight for continued activism to gain rights in Mexico. These are the rights to justice, freedom of expression, the right to information, and the right to truth and justice.

“This is a very informative book for those in the United States who are not aware of what is going on in Mexico,” said Diego Rivera Hernández, “or to those whose understanding has been shaped by Netflix series, movies, or narcoculture that portrays a simplified version of violence in Mexico as a problem of narcos.” Alternatively, Diego Rivera Hernández seeks to shed light on this crisis through the perspectives of the victims and mourning relatives of criminal and state violence.

“The book also points to the shared responsibilities of Mexico and the United States in having victims of the War on Drugs,” said Diego Rivera Hernández. “A goal of this book is to create broader communities of solidarity with Mexico and its human rights crisis.”

Narratives of Vulnerability in Mexico’s War on Drugs is published by Palgrave Macmillan. Click here to learn more about the book.