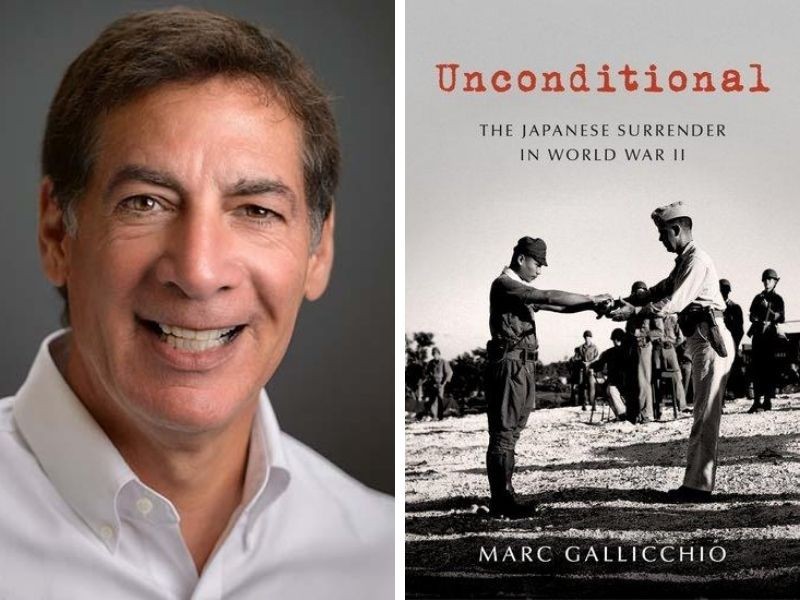 VILLANOVA, Pa. – Signed on September 2, 1945 by Japanese and Allied leaders aboard the American battleship USS Missouri in Tokyo Bay, the instrument of surrender that formally ended the war in the Pacific ended one of the most cataclysmic engagements in history. In a new book, Unconditional: The Japanese Surrender in World War II (Oxford University Press, 2020), Marc Gallicchio, PhD, chair and professor of History in Villanova University’s College of Liberal Arts and Sciences, reveals how the policy of unconditional surrender has shaped our memory and our understanding of World War II.

“Unconditional offers a fresh perspective on how the decision to insist on ‘unconditional surrender’ was not simply a choice between pressing the Japanese into submission or negotiating an end to the conflict. It also traces ideological battle lines that remained visible well into the atomic age as the enemy shifted from Tokyo to Moscow,” noted reviewer Richard J. Samuels in The New York Times. “For Marc Gallicchio, the answer is in the domestic politics of the United States and Japan, which drive a narrative that unwinds less like a debate than a geopolitical thriller.”

The surrender fulfilled the commitment that US president Franklin D. Roosevelt had made in 1943 at the Casablanca conference, which finalized Allied strategic plans against the Axis powers and promoted the policy of “unconditional surrender.” The goal was to exclude any separate peace by one of the Allies. It also meant that Germany and Japan would fight till the bitter end, as they had no hope of any conditional peace.

Though readily accepted as policy at the time, after Roosevelt's death in April 1945 support for unconditional surrender wavered, particularly among Republicans in Congress, when the bloody campaigns on Iwo Jima and Okinawa made clear the cost of military victory against Japan. Germany's unconditional surrender in May 1945 had been one thing; the war in the Pacific was another. Many conservatives favored a negotiated surrender.

As the 75th anniversary of Victory over Japan (V-J) Day approaches, Dr. Gallicchio reveals how and why the surrender in Tokyo Bay unfolded as it did and the principal figures behind it, including US Army Chief of Staff—and future Secretary of State—George C. Marshall and General Douglas MacArthur. Though this was the last time American forces would impose surrender unconditionally, questions surrounding it continued through the 1950s and 1960s during the Korean and Vietnam Wars and the Cold War.

Dr. Gallicchio was a Fulbright Visiting Lecturer in Japan from 1998 to 1999 and again from 2004 to 2005. He is also the author of The African American Encounter with Japan and China: Black Internationalism in Asia, 1895 – 1945 (The University of North Carolina Press, 2000) which won the Society of Historians of American Foreign Relations Robert H. Ferrell book prize. He received his doctorate in History from Temple University.