The Villanova Art Gallery and the Villanova Center for Irish Studies Present: Beyond the Words: Portraits of Irish Writers, An Exhibit by Photographer Robin Hiteshew 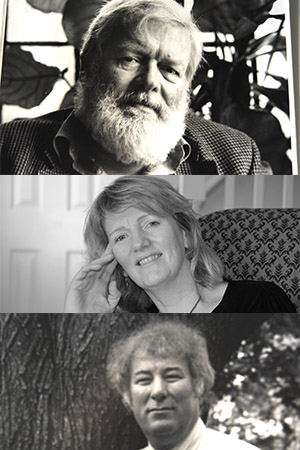 Villanova, PA—The island of Ireland is known for its outsized literary tradition: Its novelists, poets, and playwrights have produced many of the world’s most significant works, across centuries, genres, and styles. As a student of that grand tradition, Philadelphia-area photographer Robin Hiteshew has made a decades-long project of capturing the images—and even the essences—of as many contemporary Irish writers as he can. Fifty-eight of his finest portraits will be presented at the Villanova Art Gallery from March 13-April 14, 2020, in his exhibit, Beyond the Words: Portraits of Irish Writers.

Beyond the Words: Portraits of Irish Writers is co-sponsored by Villanova University’s Center for Irish Studies. The exhibit opens Friday, March 13, with a reception to meet the artist that evening from 5-7pm. Villanova Professor Joseph Lennon, PhD, the Emily C. Riley Director of Irish Studies, will present opening remarks. The exhibit continues to Monday, April 14. The Art Gallery is located in the Connelly Center on the Villanova campus. Convenient on-campus parking is available. More information is available on the gallery’s website at www.artgallery.villanova.edu.

Visitors to Beyond the Words will encounter the likenesses of poets Seamus Heaney, Eavan Boland, Eamon Grennan, and Michael Longley; and novelists Colm Toibin, Anne Enright, and Glenn Patterson, among many others. Some writers—like Heaney—sat for Hiteshew multiple times over the course of several years, and each portrait captures a different moment in the writer’s evolution. Always, the images represent a collaboration between the photographer and the subject. Hiteshew says, “My goal is to try and capture in a portrait something about who the person is. I hope that the viewer will come away from the photograph knowing something about who that person is in some kind of intangible way. But also, I hope that the viewer will leave wanting to know more about the writer—to read his or her work, perhaps.”

The images in Beyond the Words: Portraits of Irish Writers are about evenly divided between black and white film and digital color photographs. Nearly half of them were shot on the Villanova University campus, while those writers were in town for a reading or as the Charles A. Heimbold Jr. Chair of Irish Studies, a visiting professorship. Early in the development of the series, Hiteshew would attend a wide variety of readings by Irish writers and introduce himself right there, sometimes capturing the writer’s portrait in the few minutes before or after an event. As the project gained momentum, however, he has been able to develop ongoing relationships with many of his subjects, who have in turn referred other writers to him. “At this point, I have about 100 photographs in the collection,” says Hiteshew. “So in explaining the collection, I can reference a few of the names of people I’ve worked with and people know that it’s the real deal.”

Hiteshew doesn’t seek to set a particular mood during a portrait sitting: Rather, he works with each writer to build a rapport, and from that connection, the images follow. He reflects, “Each writer is different about what they choose to show and how open they are willing to be. Some of them are a bit more formal than others. But the photographs that draw my attention are the ones where the writer has opened themselves to me, and I was lucky enough to be able to take the image at the moment that there was that interplay between myself and the writer.”

Hiteshew is a self-taught photographer. He learned the basics of photography and film development as a teenager, when a photographer offered an after-school program in his residence. It wasn’t long thereafter that he began to shoot photos of writers. Hiteshew remembers, “When I was in high school and began to read more seriously, it really bothered me when there was no author photograph on the book jacket. I always wondered who this person was—who had generated this amazing work of art. So I set out to create those images!”

Robin Hiteshew earned his BA from Temple University and a Masters from Case Western Reserve University. His work has been seen throughout the Philadelphia area and included in a variety of publications. In addition to his writers’ series, Hiteshew also has an ongoing collection of portraits of Irish musicians called The Face of Irish Music.

The Villanova University Art Gallery is open weekdays from 9 a.m. -11 p.m. For extended and weekend hours, and other information, contact the Art Gallery at (610) 519-4612. More information is available on the Gallery's website: www.artgallery.villanova.edu.