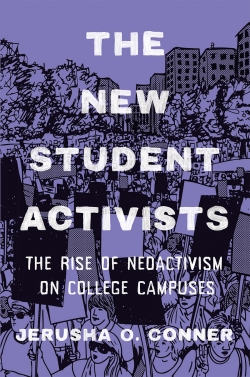 VILLANOVA, Pa.—A new book by Jerusha Conner, PhD, associate professor of Education at Villanova University, examines what it means to be a student activist today and the factors on and off college campuses that have led to this new generation of activists. The book, The New Student Activists, was published by Johns Hopkins University Press.

Since the 2016 election, high school and college students have been significantly more involved and engaged in debates on a number of issues ranging from politics to student debt to criminal justice and climate change. A 2018 survey of 15-17 year-olds found that 64 percent were paying more attention to politics and 61 percent were engaging in political activism.

Conner had just finished editing a book about contemporary youth activism when college student activism surged in 2016. She was reading about college students engaging in more activism, but thought there was a missing piece that she wanted to know more about: who were these students? When, how, and why did they become activists? What do they do and what are their goals?

Some of the most memorable instances of campus activism in the United States date back to the early 20th century, dealing with education, civil rights, and war. More recent events at the University of Missouri and Middlebury College, among others, made waves across the country, leading to countless media reports about the new rise of activism.

Conner observed, “most of the existing scholarship on activism explores the experiences of high school-aged youth organizers, adults who turn to activism later in their lives, or earlier eras of student activism.” Conner continues. “The approach of this book differs. Rather than analyzing particular instances of campus activism or focusing on particular affinity groups of students known for their political engagement, we invited self-identifying student activists to opt-in to this study and share their experiences.”

Conner notes that this unique approach allowed the research team to draw conclusions about how and why students – engaged in different causes, studying on different campuses and coming from different backgrounds – adopt activist identities.

Conner hopes readers will develop a new understanding of who current college activists are and how they both resemble and differentiate themselves from past generations, by gaining insights into the factors that influence and sustain this new wave of activism.

“After reading this book, people should have a better sense of the emotional, intellectual, and behavioral labor of campus activism, and they should be able to explain both the recent resurgence of student activism on college campuses and its impact.”

Media Coverage:
Are Student Activists 'Snowflakes'? (The Chronicle of Higher Education)
Q&A with author of book that profiles campus activists (Inside Higher Ed)