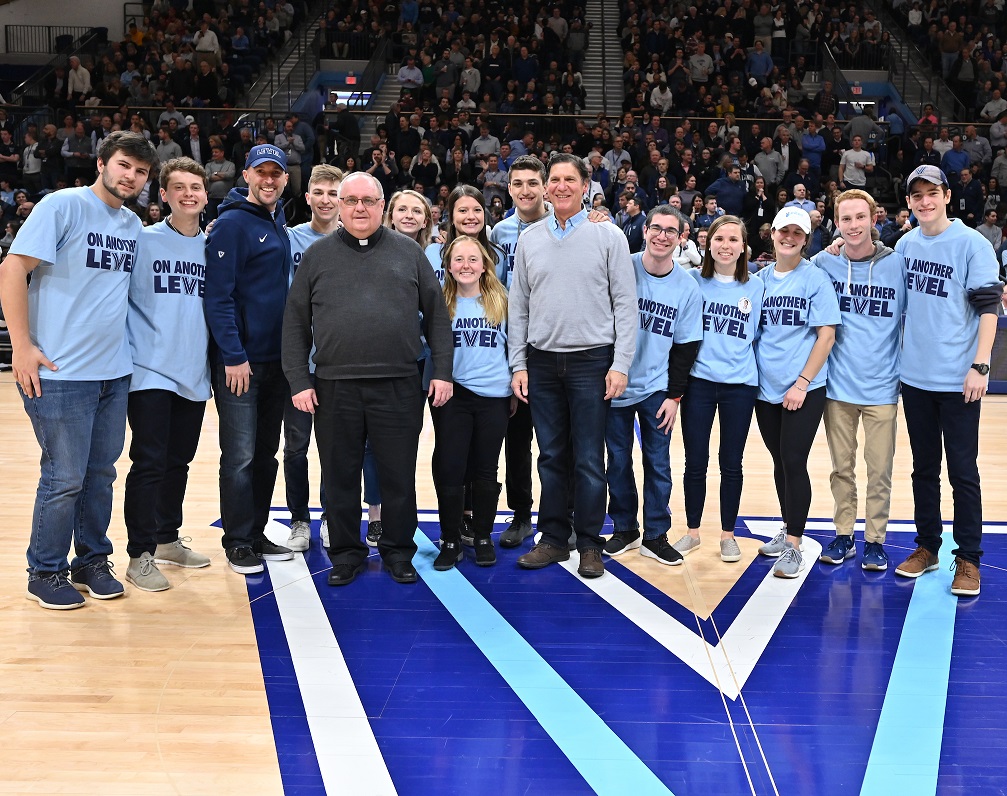 In addition to receiving the Father Bill Atkinson Humanitarian Award from the University's Office of Disability Services, Father Dennis Weber was recognized during the Villanova men's basketball game on Feb. 12.

VILLANOVA, Pa. – Villanova University’s Office of Disability Services has awarded the eighth annual Father Bill Atkinson, OSA, Humanitarian Award to Father Dennis Weber, Director of Ministry for Development Programs of Catholic Social Services for the Archdiocese of Philadelphia. Fr. Weber has been a tireless advocate for the rights and treatment of persons with living disabilities. The award, which was presented to Fr. Weber on Thursday, Feb. 13 in a ceremony on campus, seeks to recognize an individual, group or organization that exemplifies the spirit and service that the Rev. Fr. Atkinson embodied throughout his life. Fr. Atkinson was the first quadriplegic to be ordained as a priest in the history of the Catholic Church.

“Father Dennis has had a major impact on the disability community throughout the diocese,” said Stephen McWilliams, PhD, Director of Disability Services at Villanova University. “His humility, compassion, and dedication to the service of others mirrors the values of Father Atkinson. Honoring Father Dennis is a fitting way to honor the memory and spirit of Father Bill.”

Fr. Weber has served the Philadelphia and Delaware County disability population as a teacher and administrator for the past 25 years. He has served as the administrator for Cardinal Krol Center, Don Guanella School and Divine Providence Village—facilities for persons with intellectual disabilities. A Villanova University alumnus, as well as a graduate of Monsignor Bonner High School—the same school Fr. Atkinson attended—Fr. Weber is currently the Director of Ministry for Development Programs of Catholic Social Services for the Archdiocese of Philadelphia.

Previous award recipients have included Celeste and Sydney Corcoran, a mother-daughter duo and survivors of the Boston Marathon bombing; former Rutgers University football player Eric LeGrand, who suffered a severe spinal cord injury during a game in 2010; and ESPN reporter Tom Rinaldi, who featured former Villanova Men’s and Women’s basketball managers, Frank Kineavy and Nick Gaynor, both of whom have cerebral palsy, when ESPN’s College Gameday came to campus in 2011.

The 2020 Fr. Bill Atkinson Humanitarian Award event was part of the annual NOVABILITY Week celebration, hosted by LEVEL, a student group formed to bridge the gap between students with various abilities and disabilities.

Fr. Atkinson, who passed away in 2006, is being considered for canonization to become a saint in the Roman Catholic Church. Injured in an accident in 1965 that left him a quadriplegic, Fr. Atkinson was ordained in 1974 and taught at Monsignor Bonner High School in Drexel Hill, Pa. for nearly 30 years.