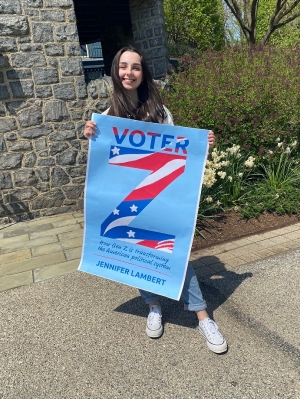 Growing up in New Jersey, Villanova University junior Jennifer Lambert always saw herself becoming a nurse practitioner. Lambert enrolled in a program at her local magnet school that allowed her to take classes in partnership with Rutgers University, where she took classes to earn her medical certification. But it was during her senior year of high school when everything changed.

Following the mass shooting at Marjory Stoneman Douglas High School in Parkland, Fla., in February 2018, student survivors came together to take a stand for stricter legislation to prevent gun violence. That March, they organized the March for Our Lives, the largest single day of protest against gun violence in history. It was this event that piqued Lambert’s interest into how youth activists are shaping the political discourse in the United States. Her interest in news and politics, and a love for writing, now became her focus.

“I was inspired by seeing so many people around me and my age who were interested in politics,” says Lambert, ’22 CLAS, a political science major, with minors in communication and public administration. “There’s been a lot been going on since the 2016 election, much of which has been led by Generation Z.”

Writing for Villanova’s chapter of the online news platform Odyssey, Lambert was discovered by Eric Koester, who helps college students and professionals publish books based on their passions through the Creator Institute at Georgetown University. Lambert spoke with Koester about youth activism, social media’s role with Gen Z and how it allows youth to mobilize at such high rates. It was during this time that the idea behind her forthcoming book, Voter Z, was born.

“Writing a book has always been on my bucket list,” Lambert said. “I just did not think it would happen when I was 20-years-old.”

Voter Z, released in April 2021, examines why Gen Z “thinks what they think,” and the events and phenomena that have shaped the generation and their political beliefs. Lambert defines Gen Z  as anyone born between 1995 and 2012 and has an estimated population of 67 million. Major events like the 2008 recession and War in Iraq and societal issues, such as climate change and racial injustice, have thrust this generation of youth into engagement at the local and national levels.

Lambert’s book discusses how history moves in generational cycles. We are now seeing— and will continue to see— a shift to the younger generations playing a larger role in changing political discourse. She mentions Madison Cawthorn (the first Gen Z member in Congress) Alexandria Ocasio-Cortez (a model for how politicians can use social media) and Malala Yousafzai (Gen Z member on the global stage making a difference in politics) as influential figures for this generation. 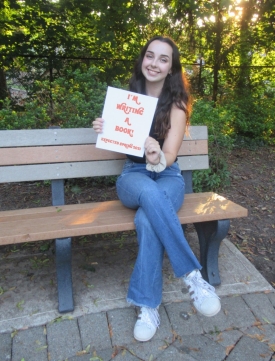 “Joe Biden is the oldest president in the history of our country, but we’re quickly approaching a time where Gen Z will be old enough to hold office. Younger generations are a lot less polarized than the older generations. I think we’ll see both sides come more towards the center on issues. Believe it or not, regardless of political ideology, young people have a lot in common.”

The 2020 presidential election saw historic turnout and that was true for the younger population, too. It’s projected that 53-56 percent of voting-eligible young people (ages 18-29) cast a ballot in the election, an eight-point increase from 2016. Lambert says the narrative of younger generations being ignored because they’re not reliable at the polls is changing. “If you participate, you have your voice heard. I think we’re going to start seeing younger people having their voice heard at higher levels.”

The year 2020 also brought the COVID-19 pandemic and that was not lost on Lambert as she wrote the book during this time period.

“COVID continues to play a huge role in this generation and it will be some time before we understand its full impact, I see how it’s impacting the development of my peers. It’s going to be affecting our political views, our views on public health and health care disparities on race and socioeconomic status.”

Lambert says Voter Z would not have been possible without her Villanova education. She also credits Karen Graziano, an adjunct professor in the English department, who encouraged her to keep writing and has supported her in her professional pursuits. Graziano was the first person Lambert told about the book.

“I have been able to tailor my education to fit my interests in a way that I never thought was possible. In my political science classes, I find my passion for young people’s involvement in politics. In communication, I learn about how people engage with new media. In public administration, the way in which policy is created and the different avenues for activists to implement the things they’re passionate about. All of my classes have had a role in getting me here. I think it’s all built up to this point.”

Lambert is unsure of what the future holds. She’s considering law school, but leaving her options open. Regardless, her future is very bright.

“This book has already opened so many doors for me and helped me expand my professional network. I am hoping that this book helps me stand out in the graduate school admissions process and eventually, I hope to secure a job where I can combine my passions for politics and writing.”

More information on Voter Z can be found here.