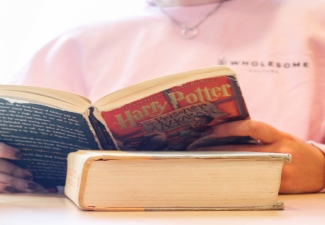 A Villanova English course, "Harry Potter: Quests/Questions," filled up within a day.

The magic of Harry Potter first flew in (on a broomstick, of course) to homes everywhere nearly 25 years ago. Debuting in 1996 with Harry Potter and the Philosopher’s Stone (retitled Harry Potter and the Sorcerer’s Stone for American publication in 1997) J. K. Rowling’s fantastical world of witches and wizards both captivated and enticed readers of all ages, assimilating itself into every facet of popular culture.

Evan Radcliffe, PhD, an associate professor and Director of the English Graduate Program, was first introduced to the series through his children. Together, Dr. Radcliffe and his family read all seven novels and discussed their thoughts around the dinner table. Now, years later, Dr. Radcliffe has crafted an English course with the specific purpose of analyzing Harry Potter through a literary lens, transposing those boisterous dinner table talks to the enthusiastic halls of Villanova University.

Although an inaugural course this Fall 2021, it is no surprise that ENG 3690 Harry Potter: Quests / Questions filled up within a day. Most seats were grabbed by Villanova seniors who wanted to take a less traditional English course; one with a modern twist that would round out their Villanova academic experience with pizzaz.

Amanda Smith ’22 CLAS, one of those lucky seniors, is an English major who entered the course primarily because Harry Potter was a “big part of [her] childhood and love for reading and literature.” While most students were familiar with Harry Potter to some degree, few had analyzed the novels as pieces of meritorious literature.

Children and adults alike have come to recognize Harry Potter as the good guy who, with help from a lively cast of family and friends, defeats evil. But as adults revisiting the series through a critical lens, students were struck by the less-obvious ambiguity. “How is it different reading the novels now than when [they were] high school students?” Dr. Radcliffe wanted to know. For many, the answer was complicated. Why is bravery, above all else, expounded and what message does that send to young children? Is it ever really possible (even in a work of fiction) to be all good or all bad? How do we develop and maintain empathy for complex characters, especially when they act outside of our own set of values?

Even J. K. Rowling herself was discussed. Her recent comments regarding the transgender community sparked debate and inspired students to ask if art can ever truly be separated from the artist? And how does one reconcile a love for Harry Potter with the disapprobation of its creator?

These questions were not easily answered. But that, according to Dr. Radcliffe, may just have been the point. “Students became more sophisticated readers and also more mature thinkers in general.”

Smith heartily agreed. “I’ve read the series six or seven times but I’m still seeing different themes [each time I go back to it].”

Sitting in on the course, there were lively debates, impassioned pleas to join one camp or another and even disagreements. But above all else, Dr. Radcliffe feels there is inherent value in studying the series.

“You see what’s involved in children’s and young adult literature. You apply reading skills to the world around us. And then you can do that in relation to books that we’re already passionate about... I’ve learned a lot myself. [It was a] very collaborative course.”

It is hard to imagine a world in which Harry Potter does not exist. And for that reason alone, there is value in recognizing what it has offered us, how it has influenced us, and where throughout life this fantastical literature has shaped us.

Time to dust off those old copies.