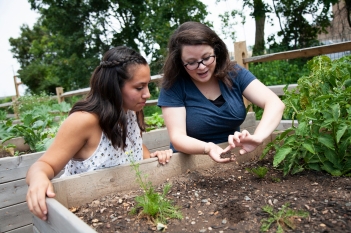 Rising junior Eliana Uriona, ’21 College of Liberal Arts and Sciences (CLAS), was just a young girl growing up in Virginia when she developed a passion for cooking, which led to the discovery of farmers markets and the idea of buying local and fresh produce. After visits to Central and South America and an internship at the Redeemer Valley Community Garden in Huntingdon Valley, Pa., Uriona knew one day she wanted to grow her own herbs and vegetables.

“It was in Ecuador that I first realized gardening and farming are both an art form and that it takes not only skill and practice, but passion and love for the earth,” Uriona said. “I have learned so much about environmental care, environmental issues, the effects of climate change and sustainability in my experiences and classes.”

This summer, Uriona and Visiting Assistant professor of Chemistry, Vanessa Boschi, PhD, are studying which organic amendments in soil best support plant productivity. The research will take place in the University’s research garden, known as Villanova Consortium for Agricultural Research and Education (VCARE). Uriona, who received a Villanova Undergraduate Research Fellowship for the summer project, and Boschi will be the first-ever research team in VCARE.

“There are so many different types of chemistry, and soil chemistry is so important,” says Boschi. “Many people don’t realize how vital chemistry is to a lot of the things we eat. We need to be asking, how are we going to feed ourselves in the next 100 year? How do we optimize soil chemistry to meet the needs of a growing population and combat the negative impacts of climate change?”

The benefits of this research are endless as concerns escalate over population growth, which leads to more people needing to be fed with food that is becoming less nutrient-rich due to climate change, among other factors. The team will be able to determine which amendments yield the best food supply and maintains the highest level of soil nutrients, which is critical with increasing air temperatures and variability in precipitation.

For the research, Uriona and Boschi chose tomatoes and chamomile, which are found across much of the world. As a pre-med student and double major in Chemistry and Spanish and minor in Global Health, Uriona has an interest in chamomile and its benefits related to plant-based medicine. The plants are rooted in the soil with four different organic amendments: chicken manure, alfalfa, dried molasses and biochar.

Over the course of the summer, they will measure several nutrients in the soil two different ways: a traditional lab setting and an affordable at-home test kit that can be used for the everyday person or farmer, which is helpful for those who don’t have access to a lab. First, they’ll examine the levels of nitrogen and phosphorous, which are key nutrients plants need to produce DNA and chlorophyll, to support their growth and to make and store energy. These will be measured in the lab and the test kit. 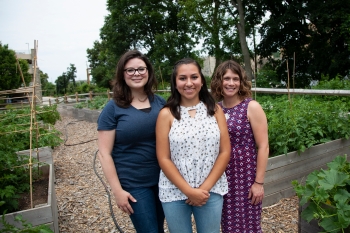 The team will also measure the pH and four cations – calcium, magnesium, potassium and sodium – to determine the availability of negative charge in the soil, also known as the cation exchange capacity. The greater the amount of the negative charge in the soil, the greater the ability of the soil to retain key nutrients like magnesium, calcium and potassium in order to support the plants. All four cations will be measured in the lab, while the test kits can only measure potassium and pH.

Since the goal of the research is to identify the organic amendments that can provide greater food supply and plant productivity, they will also measure the plant’s biomass using height, width, leaf density and yield of tomatoes and chamomile buds.

While the climate on Villanova’s campus might differ from areas in Central and South America, Uriona says the results of water retention due to the soil amendments is something that can carryover to different climates, particularly in regions experiencing drought.

VCARE officially opened in the fall of 2018 and features 19 raised 8’ x 4’ beds. The idea for a campus garden started in 2012 from former student, Michelle Velez, ’14 CLAS, and later turned into the notion of a research garden with the help of Civil Engineering students and Geography and the Environment Professor, Steve Goldsmith, PhD. The garden was made possible through the generosity of Margaret McCarvill '73 CLAS and Stephen Amadio '72 CLAS.

“The goal of VCARE is to be an educational and cross-curriculum resource for research opportunities, class curriculum and social outreach for the University,” said Liesel Schwarz, Villanova’s Sustainability Manager. “We are so thrilled to have such passionate people like Eliana and Vanessa as our first research team in the garden. We look forward to more research opportunities for our students and faculty and to raise the awareness of sustainable agriculture to our campus community.”