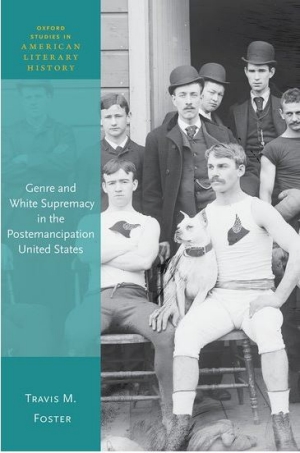 VILLANOVA, Pa. – At a time when white supremacy is front and center in US headlines, a Villanova professor is tackling the topic from a fresh perspective in a new book. In Genre and White Supremacy in the Postemancipation United States (Oxford University Press, 2020), Travis M. Foster, PhD, associate professor of English and academic director of Villanova’s Gender and Women’s Studies Program, offers an important new study of popular literature’s role in refashioning and resisting white supremacy in an emergent post-emancipation climate.

In his book, Dr. Foster discusses how popular literary and cultural genres influenced how Americans understood their social and political affiliations, their citizenship, and their race. In the wake of emancipation’s failed promise, two key developments unfolded: white supremacy amassed new mechanisms and procedures for reproducing racial hierarchy, and black freedom developed new practices for collective expression and experimentation. This new “racial ordinary” came into being, his book argues, through literary and cultural genres, including campus novels (novels whose main action is set in and around a university campus), the Ladies' Home Journal, Civil War elegies, and gospel sermons.

“Genre and White Supremacy in the Postemancipation United States is well conceived, important, and demonstrates tremendous range across conventional literary genres of the nineteenth century. This work is outstanding, timely, and will appeal to a broad range of readers,” said J. Samaine Lockwood, author of Archives of Desire: The Queer Historical Work of New England Regionalism and associate professor of English at George Mason University.

Dr. Foster’s research focuses on 19th century US literary histories, with a particular focus on white supremacy and antiblackness, genre and genre criticism, and gender and queer studies. This is his first book. He has published articles in a number of academic journals, including American Literature and The Edith Wharton Review. He received his doctorate in English and American literature from the University of Wisconsin.