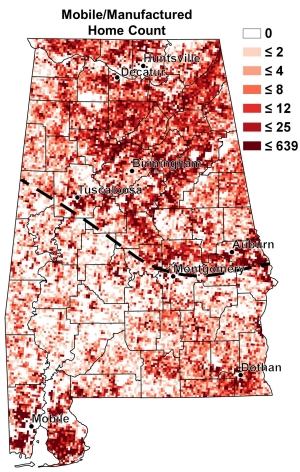 VILLANOVA, Pa. — In March 2019, one of the deadliest tornadoes recorded in recent years hit the rural part of eastern Alabama. The twister spanned nearly a mile wide – four times the size of a normal tornado – and reached speeds of 170 miles per hour, killing 23 people.

While we generally think of tornadoes in the Midwest, most storm-related deaths are occurring in the Southeast. Why? More frequent and significant tornadoes, higher poverty rates and a large number of mobile homes. Of all the housing units in Alabama, as many as 13 percent are mobile homes. The national average is five percent. In the March Alabama tornado, 19 of the 23 deaths were people that lived in mobile homes.

New research from Stephen Strader, PhD, assistant professor of Geography & the Environment, examines the evacuation vulnerability of mobile home residents and their access to emergency medical services in the Southeast.

Strader’s research found Alabama’s mobile home residents have fewer tornado sheltering options and are disproportionately farther from first responder services. This builds on previous research, which has shown less than 30 percent of residents evacuate mobile homes during tornado events, despite their willingness to flee. Strader’s research found 80 percent of Alabama’s mobile homes are in rural and exurban areas, located outside of mobile home parks and communities, and primarily in the southern part of the state.

“We found that the people that need tornado shelters the most in Alabama (mobile home residents), face many more physical, social, and economic barriers compared to permanent home residents when attempting to seek safe shelter from tornadoes,” Strader said.

He noted there are several factors at play in an individual’s evacuation. First, not only do these residents live farther away from shelters and EMS, but they may not have reliable transportation. Additionally, residents need to be able to better identify their location on a map relative to an approaching storm and sheltering locations in order to evacuate effectively. 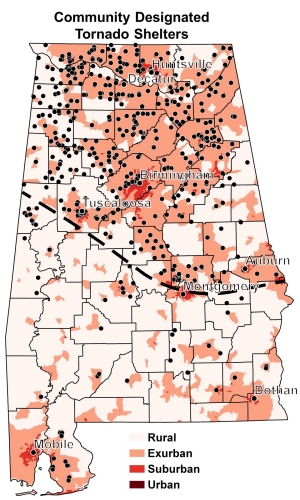 “The best action a mobile home resident can take is to act on a tornado watch to guarantee they won’t be stuck at home with inadequate protection from tornadic winds and flying debris,” Strader says. “Tornado watches are issued hours in advance. The average tornado warning lead time across the U.S. is 14 minutes, but can vary by region, and often that is not enough time for residents to respond appropriately and take proper shelter from a tornado. People inherently wait until the last minute and by that time, it really could be the difference between life and death.”

When people evacuate their mobile homes, where do they go? Strader’s research shows the first evacuate to a friend or family member’s permanent home. Next on their list would be a church, followed by community shelters. The latter may not be a viable option. Sometimes these facilities might not be available due to overcrowding and they have also been known to not open when a tornado warning is announced.

“It is not as easy as saying ‘we need more shelters’ to solve this issue,” Strader says. “A big reason that community tornado shelters are not a viable solution for many counties in Alabama is because of a more dispersed and spread out population. If there are no large population centers, where do the county emergency managers place the shelter? This makes it extremely difficult to properly protect mobile home residents in Alabama.”

Strader continued, “In addition, the money needed for shelters in these areas often go to more pressing needs, especially for poorer counties in southern and central Alabama. We need more education on mobile home safety, better building codes and manufacturing of mobile homes. The future is unknown, but it is going to take a number of different groups to work together to improve community and individual resilience in the face of disaster.”

To learn more about Stephen Strader and his research, click here to visit his media expert profile.