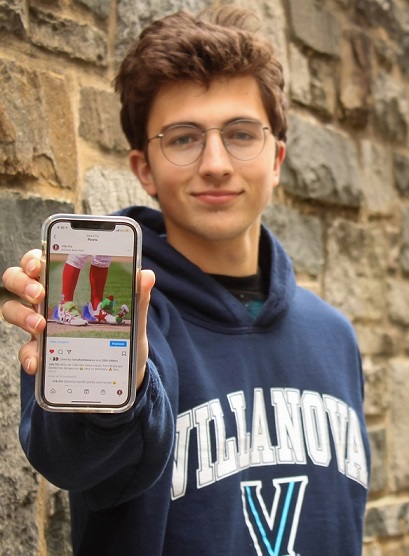 Alex Tantum has more than 23,000 followers on his MLBFITS Instagram account, including more than 100 MLB players. Above, Tantum shows off an MLBFITS post featuring Bryce Harper's customized cleats.

It seems like a nightly occurrence: ESPN and Turner Sports airing footage of NBA stars such as LeBron James and Russell Westbrook walking through the tunnel as they enter the arena before games. The networks recognize that fans love seeing players’ style—from their clothing and footwear all the way up to hats and headphones. There are numerous social media platforms dedicated to sports’ culture and fashion.

Villanova student Alex Tantum has seen the television coverage and scrolled the social media feeds—including the Slam magazine run @leaguefits Instagram account, for example—which showcase the outfits of NBA players. But Tantum’s passion lies on the fields of Major League Baseball (MLB). And what he sees lacking is baseball’s appeal to a younger and more diverse fanbase.

“I have noticed that Major League Baseball is attempting to make a marketing push focusing on personality and young talent,” noted Tantum. “But they are still lagging behind to an extent.”

Tantum felt inspired to bring the excitement of MLB and its players to Instagram—through their fashion, culture and personality. In late 2019, he launched an Instagram account called MLBFITS (@mlb.fits). Tantum wanted MLBFITS to appeal to a younger fanbase and to be a platform where players could express themselves through their outfits and gear—such as the ever-popular customized cleats.

“I see MLBFITS as an account where players can promote themselves as individuals, and even their personal brands, should they have one,” Tantum said. “As a 21-year-old, I know what these young players are into and I appreciate it. In speaking with my friends—who are not as big of baseball fans as I am—I see that this is precisely what the game needs: more personality, more excitement."

“Outfits and customized gear are an extension of one's own personality,” continued Tantum. “Thinking of Lebron's ‘More than an Athlete’ slogan, I feel this is something baseball needs to do a better job of: marketing their players and letting their players express themselves as individuals. Baseball marketing needs to appeal to a younger and more diverse fanbase, and that is what I have been going about trying to do with MLBFITS.”

Upon launching MLBFITS, Tantum began slowly building his base of followers. He scrolled through MLB rosters, along with the Minor League Prospect Rankings for every MLB team. He followed players’ accounts and reached out to them through Direct Message—hoping to get a response and eventually a new Instagram follower. His first big breakthrough was a follow from five-time MLB All-Star Adam Jones, who Tantum said “loved the [MLBFITS] movement.”

Once Tantum began to pick up follows from other well-known players, he said it was a “like domino effect.” In addition to increasing his base of followers, he was posting content every day—highlighting photos of players’ outfits off the field, as well as their style on the field. He also began focusing more effort on fan engagement, posting a "Poll of the Day" about relevant baseball topics. Additionally, Tantum started outreach to players for fan giveaways. If a player provided a signed baseball for the giveaway, he would send the player a graphic and contest rules for them to post to their Instagram page as well.

“In terms of my content on MLBFITS, I look to post anything that relates to the changing baseball culture,” said Tantum. “From my perspective, with the account being ‘MLBFITS,’ I do have a focus on players' outfits. The way one dresses is an extension of their personality, including the customized cleats that a given player is wearing. But I also post content surrounding the expression of emotion on the field. As simple as it may sound, the goal truly is to make baseball cool.”

More than a year in, MLBFITS’ following has grown to more than 23,000, including retired MLB stars like CC Sabathia and Andruw Jones; more than 100 current MLB players including Philadelphia Phillies’ Rhys Hoskins and Alec Bohm, along with others such as Blake Snell, Eric Hosmer, Todd Frazier, Tim Anderson, Kolten Wong, Miguel Sano and Byron Buxton; as well as 30 of the game’s top 100 MLB prospects.

As for the future of MLBFITS? “I fully believe that this account can hit 200K followers and become one of the go-to MLB culture pages,” noted Tantum. “This movement is only just beginning, with more and more up-and-coming pro players being into their outfits and gear.”

As a lifelong baseball fan following the New York Yankees, Tantum grew up going to games and attending Yankees’ Spring Training in Tampa. As he grew older and recognized that being a professional athlete was not in his calling, he became determined to find his way into the sports world in some other fashion. A Political Science major at Villanova, Tantum foresees sports being part of his future.

“I certainly want a career in sports, as I think your career should involve an area that you are truly passionate about,” said Tantum. “Being a Political Science major has provided me with some great benefits in terms of not only my writing skills, but also my ability to think in a more complex manner. One does not have to major in a business-related field to enter the sports industry. For proof of that, you need to look no further than current Houston Astros General Manager James Click, who majored in History at Yale University. There are countless other examples.”

Through his work on the growth of MLBFITS, Tantum has gained valuable experience in marketing and has found it to be an area he greatly enjoys. Exactly what his career path holds remains to be seen. But for now, Tantum’s focus—in addition to his academics of course—is MLBFITS.

“I think a key to engaging a younger generation of fans is having true superstars of the game and promoting not only their play, but their personality both on and off of the field,” said Tantum. “As I like to say, ‘the Game is changing’. Part of the reason I think that the NBA and NFL are so successful is that they have superstars that take full advantage of their platform to market themselves and showcase more of their personalities, which makes it easier for the younger generations to relate to them, and therefore look up to them. The MLBFITS account/brand can help attract a younger fanbase to the game, and a more diverse fanbase to the game.”