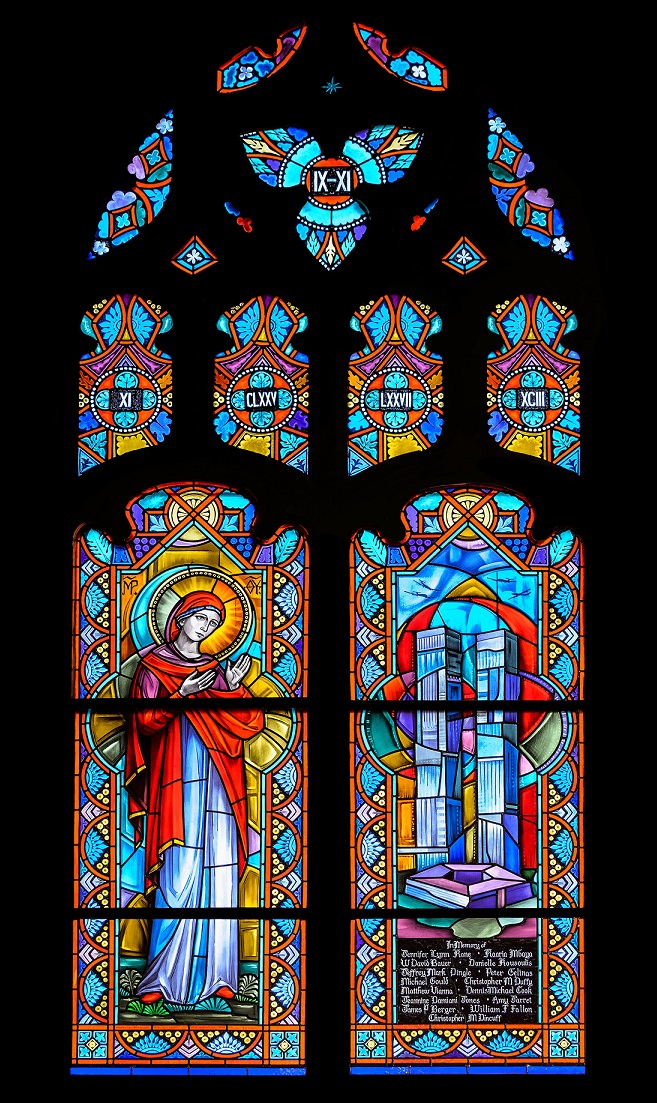 VILLANOVA, Pa. – A stained glass window memorial in Villanova University’s Corr Hall Chapel, installed in Nov. 2006, offers a loving tribute to those who died in the attacks on Sept. 11, 2001—including 15 Villanova alumni. The memorial was designed by the late Rev. Richard G. Cannuli, OSA, ’73, an Augustinian priest, artist and University professor, who served as curator and director of the Villanova University Art Gallery. Father Cannuli passed away in Aug. 2019, but his legacy lives on through his artwork.

The memorial window, which faces west, consists of two main panels with several smaller panels above, held together by a leaded framework bordered by ornamental stonework. The window’s left pane depicts the Blessed Virgin Mary in the Orate (prayer) position. The right panel shows the twin towers, the Pentagon and the field near Shanksville, Pa., the sites where the hijacked planes crashed.

Of the 15 Villanovans who perished that day, 14 worked in the World Trade Center and one was a flight attendant on United Airlines flight 175.

The details are illustrated in the smaller panels, including the date 9/11, which appears near the top in Roman numerals (IX-XI). Below, in four panels, the flight numbers of the four hijacked planes also are rendered in Roman numerals. The other window shapes picture the heavens and stars.

For Fr. Cannuli, the work started early in 2005 when he began sketching a memorial design to “write” as an icon (an icon is described as being “written,” rather than painted). Out of his work on the icon evolved the idea and design for the window.

“After 9/11, it took me a long time to process what happened that day,” Fr. Cannuli noted in an interview following the installation of the window. “I wanted to do some creative work to mark the day, but I did not want to start ‘writing’ the icon until I was able to pray and place myself in the right position.”

Fr. Cannuli designed the window after a 2005 conversation with the Rev. Peter M. Donohue, OSA, now Villanova University president. Fr. Donohue had admired the icon he saw the artist ‘writing.’ After their discussion, Fr. Cannuli agreed to create a design for a stained glass window from the image of the icon. The window would be installed in Corr Hall Chapel as a permanent memorial to the alumni who perished in the attacks on the World Trade Center.

Interestingly, shortly after Fr. Donohue’s election as president in 2006, he received an email from an alumnus urging him to consider establishing a permanent memorial on campus to remember these Villanovans. When the idea for the stained glass window memorial emerged, Fr. Donohue contacted the families to ask if the names of their loved ones could be included.

“I would not have considered the memorial unless all of the families had given their permission,” Fr. Donohue said.

For Fr. Cannuli, the window design began with a few rough thumbnail sketches drawn in pencil. He translated these sketches into scale drawings and rendered them in watercolor. In May 2006, he transferred his renderings into the correct size on paper, and took the design to the glass studio in Sienna, Italy – Vetrate Artistiche Toscane – that had manufactured many of the other stained glass windows he had designed.

The memorial window – which took nearly nine months to complete – was scheduled to be shipped and installed in time to commemorate the fifth anniversary of the Sept. 11 attacks in 2006. Ironically, heightened airport security delayed the window’s inspection at U.S. Customs, and it arrived much later. The memorial was installed and dedicated in Nov. 2006.

“I wanted this window to be a fitting and sensitive, permanent memorial for the Villanova victims of the 9/11 tragedy and for their families,” added Fr. Donohue. “The events of 9/11 affected our nation, but they also affected our Villanova community.  We are a Roman Catholic and Augustinian community.  The alumni victims were a part of us, and we need to remember them.”