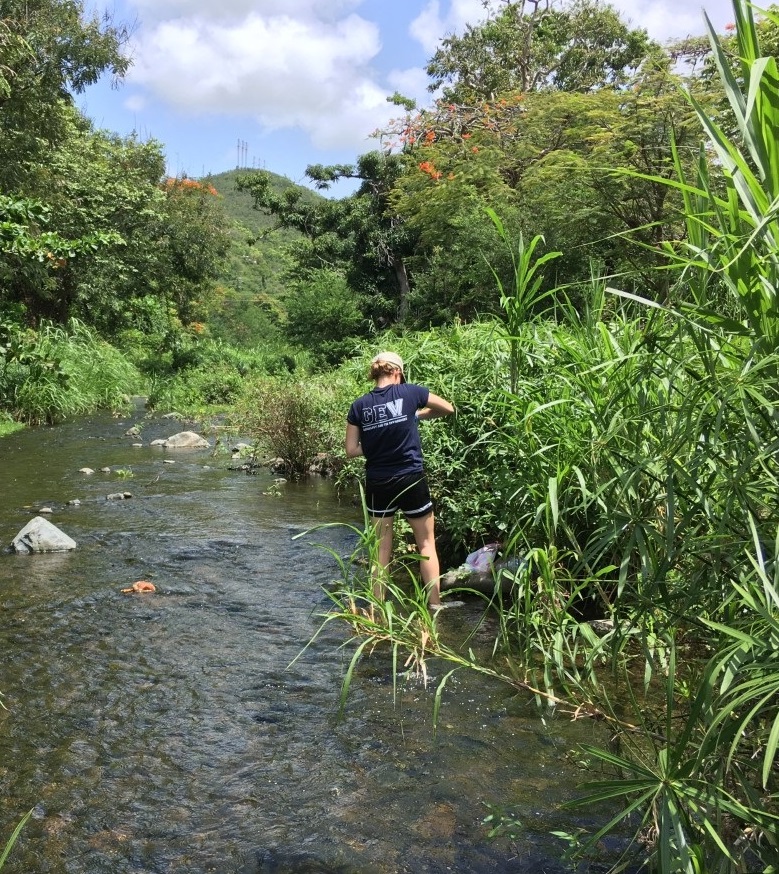 Erin Sibert takes water samples as part of her research in Puerto Rico.

In Sept. 2017, Hurricane Maria ripped through Puerto Rico, devasting the island along with other Caribbean islands in its path. The category 5 hurricane was responsible for countless deaths—and damages from the hurricane totaled nearly $100 billion. More than a year after Maria, many were still without power and clean water to drink.

A Washington Post-Kaiser Family Foundation survey showed that, in the year following Hurricane Maria, 50 percent of Puerto Ricans indicated that their families did not have enough water to drink. More than half of those surveyed worried about the water quality in their homes and approximately two in 10 said they drank water from a natural source such as a stream or river after the hurricane hit in September 2017.

Now nearly two years since the deadly hurricane, Puerto Rico is still feeling the impacts of Maria.  Steven Goldsmith and Lisa Rodrigues, associate professors of Environmental Science at Villanova, and a team of graduate students, are doing research in Puerto Rico on water quality and evaluating how stream chemistry has changed post-Maria.

The research is part of master’s student Erin Sibert’s thesis.

The United States Geological Survey estimates that Hurricane Maria triggered over 40,000 landslides in the mountainous areas of Puerto Rico—creating more fresh surfaces for chemical erosion. The resulting runoff can make its way into streams during subsequent rain storms.

“Erin’s research is focused on changes that occurred in the metal chemistry of three Puerto Rico streams pre- and post-Maria,” noted Goldsmith. “Watersheds with more landslides have more opportunities for chemical erosion to occur, potentially increasing the likelihood of metals in streamwater.”

Many residents, particularly in mountain areas, rely on streams as both a source of drinking water and for other household needs, such as laundry. The research will determine the potential exposure of these residents to heavy metals.

“It is our hope policy experts will use this information to disseminate more portable water filtration units in advance of any future hurricanes,” added Goldsmith.

Goldsmith and his team are also taking aerial drone images showing landslide scars. They are using these to compare the terrain pre- and post-Maria.