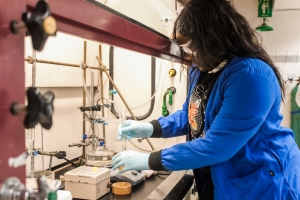 The COVID-19 pandemic is approaching its two-year anniversary. The use of disinfectants has been one of many methods deployed to try to stave off infection, with household items, like aerosol sprays and cleaning wipes, becoming commonplace for people around the globe. But another public health concern is appearing, antimicrobial resistance (AMR). Bacteria change over time, and the increased use of everyday antimicrobial products only speeds up their ability to survive the disinfectants that have been around for decades. Evolution in antimicrobials requires evolution in the chemicals used to combat them.

A team of students in the lab of Kevin Minbiole, PhD, professor and chair of Chemistry, is preparing chemical compounds that will kill off these resistant bacteria. Under the supervision of Minbiole, and in conjunction with colleagues at Emory University in Atlanta, the group has published a paper with their most recent findings. After testing almost 50 novel antimicrobials, one named P6P-10, -10 proved to be especially effective and promising in the fight against bacterial resistance. The paper is published in the journal, ACS Infectious Diseases.

“We have pictorial evidence to show our [compound] is pretty good,” Minbiole said, in reference to transmission electron microscopy (TEM) imaging of lysed cells. 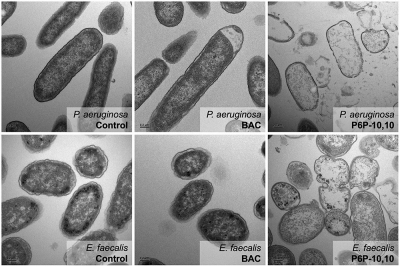 The current stable of disinfectants widely used today are largely made up of quaternary ammonium compounds (QACs). These compounds rely on a nitrogen atom bearing a positive charge to adhere to bacterial cell surfaces. Minbiole, with teams of former and current students, have worked with QACs for the past seven years. Four patents have been secured as a result of their research and a total of 28 papers have been published with their findings from testing about 800 novel disinfectants.

“We started to see what would happen if we changed the compounds from nitrogen to phosphorus,” said Lauren Amoo, ’24 CLAS. “Nitrogen and phosphorous are found in the same column of the periodic table, so they have similar properties. Could we still kill the bacteria, but have less resistance because it hasn’t seen the compound before?”

Quaternary phosphonium compounds (QPCs) were the result of the team’s hypothesis. The QPCs were sent to collaborators at Emory, who have access to pathogenic bacteria from the Center of Disease Control and Prevention in Atlanta. All the compounds were tested against six different types of bacteria. P6P-10, -10 proved to be the most consistently effective against all six opponents.

“Bacteria weren’t able to become more tolerant or resistant, despite a long, low-level exposure to it,” Minbiole said. “We can actually see the bacteria pop open after exposure.”

QPCs could be a breakthrough family of compounds in the fight against antimicrobial resistance. The process of getting it to market could be lengthy, but this work from the group shows the research being done at Villanova has potential. The team is currently working on streamlining the architectural process, securing a patent and are in talks with chemical companies to continue its development. Novel chemicals must undergo reviews from the Food and Drug Administration and Environmental Protection Agency to ensure safety for consumers.

The process requires patience, but the most recent findings in the team’s research is proof of the meaningful work being accomplished by Villanova’s students.

“You have three undergrads and a master’s student who built all these compounds and are making a pretty big difference,” Minbiole said.