What The Troubles (and Derry Girls) are Teaching Students about 2020

Most can agree that one of the few perks of the pandemic is a much shorter commute. For Jennifer Joyce, PhD, and her “Narratives of Northern Ireland” class, going virtual means that some very special guest lecturers— the Northern Irish authors the class reads each week— are able to make it to class on-time!

Dr. Joyce is the Associate Director of the Center for Irish Studies, as well as an Associate Teaching Professor in the Augustine & Culture Seminar Program and Department of English. Her course examines The Troubles—the political conflict and violence that began in the 1960s between Protestant unionists, who want Northern Ireland to remain British—and Catholic nationalists, who favor the idea of an Irish state encompassing the island as a whole. The Troubles touched nearly every aspect of life in Northern Ireland and while the violence largely died down in the 1990s, its effects are still felt in 2020. Dr. Joyce uses the literature course to not only teach about the history of the conflict, but to examine the various responses to peace and the ongoing reconciliation process, as racial and political tensions in the U.S. rise.

Despite Dr. Joyce’s worries about the course being moved to an early morning time slot, she is happy to report that her students are very tuned in. “Every morning at 8am everyone is on, everyone is ready,” notes Joyce. Since 8am in Pennsylvania is noon in Belfast, the class is often virtually joined by Northern Irish authors like Owen McCafferty and Glenn Patterson, who share insight into growing up during The Troubles— and how it influenced their art and writings— and Irish filmmaker Maurice Fitzpatrick who made a documentary on Northern Irish politician and key peacemaker, John Hume. Dr. Joyce emphasized that the ability to converse with these writers, “gives a whole other dimension to the course. When you can step inside the texts but also draw from perspectives outside of them, it shows a fuller picture.”

Part of creating that full picture of the Northern Irish experience for Dr. Joyce was assigning a few episodes of Derry Girls, a British sitcom available on Netflix. Written by Northern Irish native Lisa McGee, Derry Girls follows a group of friends in the 1980s as they encounter typical high-school experiences like crushes and class trips, against the backdrop of a civil war. Dr. Joyce uses the story—told through the eyes of a character called Erin who aspires to be a writer— as an opportunity to open a discussion about how adversity drives creation, and about appreciating what you have. She shows a scene where a bomb squad stops the school bus to investigate what turns out to be the girls smuggling alcohol in a suitcase, and another where, in a darkly humorous moment of cognitive dissonance, Erin’s Aunt Sarah begins complaining, “I’m not enjoying this bomb. I’ve an [tanning] appointment at Tropicana at 12.”

Dr. Joyce points out that scenes like those, and another where the Catholic group meets their Protestant counterparts (or “Orangemen”) from a different school, encapsulate the conditioning of the thinking around the divide. “They’re asked, ‘what do you have in common?’ and they can't think of a single answer,” Joyce said. “There is so much intergenerational hatred, and they don't know where it's coming from or why. McGee’s comedy is effective because it's glaringly obvious that human beings have much in common, and the scene gestures towards the very real peace efforts occurring in Derry at that time. We talk about how the two groups move forward.” 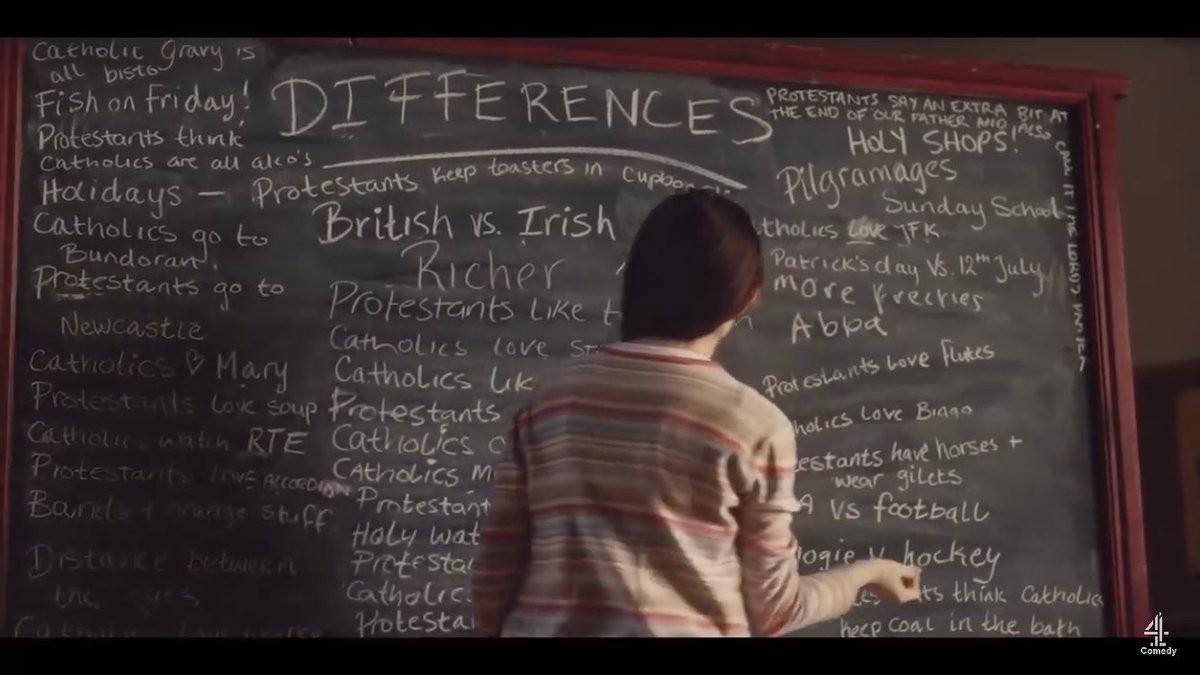 Discussions like these seem to encourage the class, who Dr. Joyce reports are “just as committed as ever,” despite the class being fully virtual. “They're bringing in all of this extra research. They are fascinated by the topic. They’re wondering why they weren’t taught about this in high school.” The class keeps the discussion fresh using YellowDig, a platform that mimics social media, where Dr. Joyce encourages the students to share articles, illustrations, videos and written or recorded reflections relevant to the course materials. She emphasizes that they should contribute in their own time, and at their own pace. She tells her students, “this is your community to create!”

According to Joyce, they find the class so relevant because The Troubles function as a more contemporary case study of a country in conflict, and one that found a largely successful resolution. With the United States and other countries impacted by a global pandemic—which has impacted public health and the economy—as well as a contentious political climate and a struggle for racial justice, the timing seems appropriate. Together, Dr. Joyce, the students, and their international guests not only talk about the works that they're reading but they get to find out how other people globally are coping with the pandemic and the state of the world.

Dr. Joyce continues, “with the continuance of racial unrest in the U.S. this summer, the visibility of the protests and the murders of George Floyd and others, the students are very aware of what the division and conflict and injustice looks like…to then look at a country like Northern Ireland which came out of a 30 year civil war and are able to come to some sense of peace and conflict resolution, the students are starting to think—can this be a model for us?”

“This course translates so much more than we think today,” adds Joyce. “Instead of abstractly talking about ‘this little pocket of violence and tension across the ocean,’ somehow, it's relating to our situation—it’s about religion and it's about race, etc. It feels like its resonating.”