‘Kensington Remembers’ Tells a Different Side of a Beleaguered Philadelphia Neighborhood 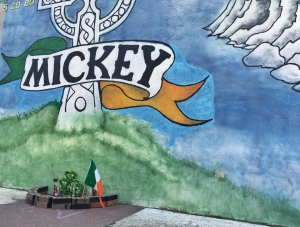 Violence, poverty and drugs have been consistent themes in the media’s coverage of the Kensington section of Philadelphia in recent years. The neighborhood has been in the news for the City’s actions towards its large homeless encampments, its infamy as the epicenter of the opioid crisis and the regular stories about gun violence, all of which led Mayor Jim Kenney to declare Kensington a disaster.

But there’s another story playing out behind these headlines: the ways in which the neighborhood remembers those who have lost their lives. These memorial sites appear throughout the area in the improvised shrines, graffiti, mural art and in a variety of other material forms. These memorials differ from the collective memories often associated with Philadelphia – the national parks, buildings and museums – that offer interpretations of its rich history. They are created by ordinary residents, using the tools, materials and skills they have available.

Gordon Coonfield, PhD, associate professor of Communication at Villanova University, first noticed these memorials walking around his neighborhood. As he explored Kensington, he began seeing more and more and observed the fact that some were disappearing as the neighborhood changed. This led Coonfield to start a project dedicated to documenting and studying these memorials called “Kensington Remembers.” As part of this project, he photographs the memorials, documents each site he finds and collects geo-location data, all which are incorporated into an interactive map. Coonfield, attempting to strike a balance between academia and serving as a resource that the community can read, see and interact with, blogs on the project website to discuss different memorials in the neighborhood and the differences between history and memory.

“For many of us, we have a service or a funeral and bury our loved ones and that’s it,” Coonfield says. “But for these residents, there’s something haunting, something lingering. There’s some need that’s not satisfied by the typical ritual we have when we go through death and loss. And there’s something else driving this.” 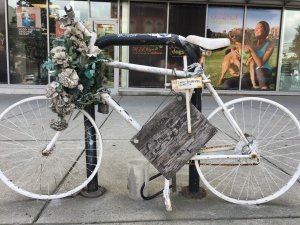 So, Coonfield asks, what is it that makes these memorials possible? When, where and why do they appear the way they do?

“I think a lot of it has to do with the ethnic and racial composition of Kensington. It has a really interesting ethnic history, with German, Irish and Polish immigrants coming first, then later African Americans, Puerto Ricans and Asians. You have groups of people that aren’t represented in the mainstream understanding of what remembering and collective memory is. The map tells the stories of the lives lost and shows that these memorials are concentrated in Kensington. You won’t really find this happening quite like this anywhere else. Something unique has been going on here for a very long time.”

But there’s an issue that could eventually remove these memorials altogether: gentrification. Many neighborhoods in Philadelphia have experienced it and Kensington is not immune to it, either.

“A number of these memorials have been destroyed, covered up or buffed out,” Coonfield says. “Gentrification is absolutely part of this story. They’re vulnerable and precarious. It is one of the things that motivated me to start the project.”

Coonfield, whose area of focus lies in urban visual communication, media and cultural studies, goes on to say, “if memory is collective, then that memory is destroyed as the people who are part of that collective are dispersed. When that happens something important is lost. There’s no real way to bring that neighborhood back together.”

While Kensington Remembers focuses on one section of a large city, Coonfield says this project can be applied to other major events, like the various memorials created to honor those who lost their lives in the September 11th attacks, or to the ways in which memory is contested in other regions around the world affected by conflict and war.

Kensington Remembers was made possible with funding from Villanova University’s Office of the Provost and with the support of Falvey Memorial Library’s new Digital Scholarship Program.