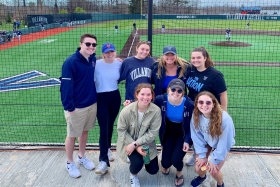 After months of uncertainty and a historic stoppage of play, 14 teams took the field on Major League Baseball’s Opening Day. But before the first pitch was thrown Thursday, Jennifer Joyce, PhD, associate teaching professor, Department of English, met with students from her long-running Baseball, Justice, and the American Dream course. The conversation was hardly about the dozen-plus teams getting back on the diamond.

“To me, I think baseball operates as a microcosm for the larger understanding of American society,” she said.

This notion is exemplified in her course in many ways, from the discourse between students and faculty to the guests who are brought in to speak. Minor league players, beat writers and groundbreaking groundskeepers all have stopped by class to give unique perspectives on the larger-scale issues in and around the game. As a former Villanova softball player and a lifelong baseball fan, Joyce has watched the class change and evolve over the course of a decade.

“People taking this class joke about being in ‘the baseball class’ because many think we’re simply discussing what’s happening on the field,” she said. “But it’s much more about the implications of what the bigger narratives are telling us about our culture and then reflecting on the national ethos behind that.”

On Opening Day, the class was paid a visit from Jerry Crasnick, a longtime baseball writer and current senior advisor for player, agent and media relations at the MLB Players’ Association. After giving life and career advice to the group of soon-to-be graduates, Crasnick fielded questions about how the game has changed, its willingness to respond to change and, of course, the lockout.

“I can’t say that I or anybody knew Opening Day was going to happen,” he said. “It’s a credit to a lot of people at the Players’ Association and at the MLB for sticking with it. It got pretty nasty for a while but baseball, as much as it is a beloved sport, it’s a $10 billion industry and you’re going to inevitably have these kinds of issues.”

With negotiations between the players and owners finally out of the way, focus shifted to restoring the game’s position as America’s pastime. Despite baseball’s struggle to attract a younger audience, there still is some hope in the future.

“It’s going through some growing pains that maybe were inevitable. As society changes and people get attracted to the flashy or instant gratification, baseball’s never really been about that.” Crasnick said. “I was pleasantly surprised when a few kids raised their hands and said they really followed baseball.”

But not every student in ‘the baseball course’ is a baseball fan. Joyce prefers the mixture of admiration and says it has offered elevated discussion and different academic perspectives on the issues. In a game ripe with strange statistics and amplified attention to detail, the course aims to provide comprehension beyond the clubhouse.

“I enjoy witnessing the evolution of their critical thinking around the way they read American culture through the sport,” she said. “My hope is that the romantic side of baseball will remain and increases their attention to the sport, while the course also will encourage them to challenge myths about the American Dream by carefully analyzing a novel or an inspiration sports movie to identify gender bias, immigrant exploitation, or toxic masculinity, for instance. Through the study of baseball, we’re unpacking the positive achievements of U.S. history, but also acknowledging the spaces where our culture may be failing certain identities today.”