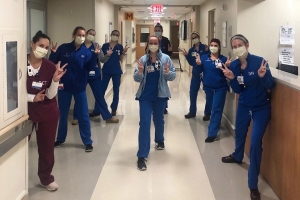 When Frankki Romano ’15 CLAS heard nurses on the frontlines of New York City’s COVID-19 fight needed help, she took action to aid her community. Romano heard from Villanova classmates Christie Long ’15 FCN and Meghan Taylor ’15 VSB, both nurses at Memorial Sloane Kettering, that the hectic situation in hospitals left nurses struggling to find time to eat during their marathon shifts.

What started out as food deliveries paid for by Romano to three units at Sloan Kettering staffed by fellow Villanova alumni nurses Elizabeth “Lizzie” Lee ’17, Noelle Trattou ’17 and Jill Campbell ’17, grew in to a GoFundMe page that raised $22,500 in the first week of April to feed doctors and nurses.

After another Villanova alumnus and friend of Romano’s heard about those initial food deliveries, he asked how he could help reach even more Villanovans in healthcare, leading to the GoFundMe page launch on April 1. The page was initially shared with friends and Romano’s colleagues at Morgan Stanley, with a fundraising goal of $2,500. Then the administrators of the Instagram accounts @NovaNationer and @NovaInsider heard about her efforts and shared the GoFundMe link on their pages. @NovaInsider administrator Anthony Fradella ’14 helped Romano create the Nurse and Doctor Nomination form to track the numerous food requests being received. Their collaborative efforts resulted in an outpouring of support from the Villanova community.

As of April 8, the fund has paid for 50 food orders; Romano is working with two New York City vendors to deliver individually wrapped meals at a cost of $6 per-person to hospital units ranging in size from 15 to 100 employees. So far, there have been food deliveries to 30 units staffed by Villanova nurses, and several connected with Morgan Stanley, in New York City. By Easter Sunday, meals will have been delivered to a total of 1,500 hospital workers.

The initiative has grown beyond New York City, with orders delivered this week to the unit of Claire Nugent '14 at UNC Medical Center in North Carolina and the unit of Erin O'Connor '15 at UCSF Medical Center in San Francisco. Requests for units staffed by Villanova nursing alumni in PA, MA, DC, DE and OH will be fulfilled within the next few weeks once local food vendors are identified.