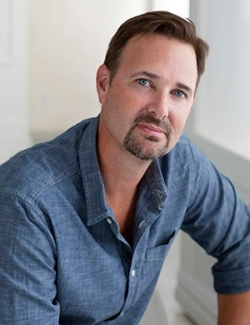 In addition to serving as an associate professor of English and director of the Creative Writing program at Villanova, Drew also directs the Villanova Literary Festival, which is in its 25th year and attracts Pulitzer Prize winners, poets, and playwrights to campus annually.

The Recruit is set in Rancho Santa Elena in 1987 when the Southern California paradise falls victim to a series of strange crimes that threaten to unravel the town’s social fabric. Trade publications are calling it, “a terrific crime novel with an explosive climax, the book dares to find a level of empathy with its young perpetrators…” (Kirkus starred review). The Recruit follows one man’s descent into the darkness lurking just beneath the respectable veneer of modern life.

Drew will give a reading of The Recruit on Tuesday, June 14 at 7 pm at the Tredyffrin Public Library in Strafford, PA. The event is free and open to the public and books may be purchased onsite. Pre-registration is requested; click here.

Drew received his MFA at the Iowa Writers’ Workshop at the University of Iowa.