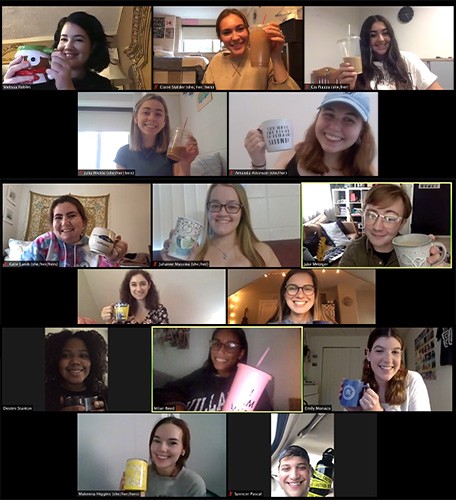 During the COVID-19-induced quarantine, many have found themselves glued to their phones and televisions, absorbing as much “true crime” news and programming as possible. Bess Rowen, PhD, a faculty member in both Theatre and Gender and Women’s Studies, is not immune to the craze. Wanting to connect America’s obsession with murder and the justice system with gender and performance, Dr. Rowen crafted a course that examines the stories we hear and the stories we tell about victims and law enforcement, and why it’s mostly women who consume the content.

And then a global pandemic hit. Dr. Rowen had to figure out how to teach her hybrid online/in-person course in a way that facilitated the discussions she hoped to have about how gender figures in to violent crimes, the media’s coverage of those crimes when they were committed and now, and the general public’s response to that coverage. Tackling topics like the ethics of reporting on violent crimes, whose story is being told and how, and how our perception of that information plays into our ideas of truth and justice can be difficult when some students are learning from the other side of the screen. So Dr. Rowen dipped into the Gender & Women’s Studies department’s tradition of “Coffee Klatches” as a way to bring her students together in a socially distant way to talk through the heavy and often upsetting content of the course.

Each “Klatch” is made up of five students who meet in small groups during their class period, as well as virtually outside of class to research and reexamine a case that is not on the syllabus through an intersectional feminist lens. Diving deep into crimes that often involve domestic violence, abuse, and murder can be a difficult thing to take in, so having the ability to have conversations in their own space, perhaps cradling a cup of coffee, is an opportunity to get face-to-face safely during a pandemic that Dr. Rowen will likely carry into future iterations of the course. Each student becomes what Dr. Rowen refers to as a “lead advocate” for two individual cases, one of which they will present in their Klatches. By asking her students to take responsibility for crafting the narrative of a case in front of their peers, Dr. Rowen hopes to illuminate how accused people, detectives, media and lawyers present cases. She challenges her students, “if you have to stake a claim what do you find out about your own personal way you view narrative? What path are you going to go down?”

These presentations get at the core of what Dr. Rowen wants to impart to her students, who she stresses, are “more than likely to find themselves on a jury one day.” She continued “I want to make smarter listeners. Smarter audience members.” Dr. Rowen’s strategy for this is to have her students examine whose stories are being told, and how. The syllabus sections are broken out by the names of the victims in the case (i.e. Nicole Brown Simpson & Ron Goldman) rather than by often more recognizable name of the perpetrator (i.e. OJ Simpson), sparking a conversation about why we popularize criminals and forget about the victims.

“Even the order we receive the information in has an impact on the way perceive a crime,” says Rowen. Her students must present the “facts of the case” the way they were originally reported, before delving deeper.

“What aspects of the case were highlighted by the media? Which were ignored? How do these choices play into the impact this case has had? For example, if you are told Person A killed Person B, it’s easy to decide Person A is guilty. Then, layer in that Person B was holding a knife to Person A’s throat. Then you learn Person A is female and was being abused by Person B, a male. The man had just threatened the female’s life. The female was pregnant at the time. How does that change your perception of guilt?”

Dr. Rowen believes that group work brings about the most fruitful insight in these complicated discussions. “We do small groups because talking with one another means we’re learning through dialogue, not through monologue. You have to be in discourse with other people, especially during this period of extreme isolation.”