Extracting Value from the Air 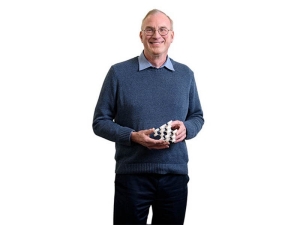 The air we breathe is made up primarily of oxygen and nitrogen, both of which are widely recognized as having a variety of essential uses ranging from medical purposes and steel production to preserving food and supporting plant processes. Argon is air’s third most abundant component, making up about 1% of the Earth’s atmosphere. Though less prevalent than oxygen and nitrogen, argon also plays an important role in industry, including the production of silicon wafers, which are needed for the manufacturing of semiconductor chips and solar panels—a $600 billion business. Recovering argon from air is an expensive process, and for the past five years, with a sponsored research grant from Air Products and Chemicals, Villanova’s Dr. Charles Coe has investigated new, cost-effective means for achieving this separation. An associate research professor in the Chemical and Biological Engineering department, Dr. Coe engaged four undergraduates, three master’s students, and former doctoral student Anthony Vallace ’21 PhD in this project.

The most common method for air separation is the cryogenic distillation process. This process first cools air until it liquifies then selectively distills the components at their various boiling temperatures. According to Dr. Coe, “The high production costs for argon are directly related to the similarity in boiling points for oxygen and argon.” The two gases also have similar thermodynamic properties and are nearly identical in size, which makes separating them a challenge. “To date there has not been a suitable means to achieve this separation at ambient temperatures in a cost-effective process,” he says.

A possible solution has been found in chabazite (CHA), a small pore zeolitic molecular sieve with a nominal pore opening that possesses properties that may be tailored to kinetically separate oxygen from argon. “After extending the known composition range of CHA, studies show that it is possible to adsorb oxygen about a hundred times faster than argon, thus providing the basis for developing an improved process for producing argon,” explains Dr. Coe. That finding has led to two U.S. patents that include Dr. Coe, a Villanova master’s student, and two engineering undergraduates as inventors.

The next challenge was to find a cost-effective means to produce this adsorbent. After extensive initial syntheses, which involved using a more economic X-type zeolite starting material and a one-step cation exchange, Dr. Coe’s group further simplified the synthesis by replacing the zeolite starting material with simple silica and aluminum reagents, which had the desired outcome at a lower cost. This research and extensions to improving novel chabazites are described in two recent publications, including “A Study of Structural Defects in X- and Y-Type Zeolites and Their Effect on Their Transformation to Aluminum-Rich Chabazite,” which appears in The Journal of Physical Chemistry, June 3, 2021.