Aaron Bauer, PhD, Professor, Gerald M. Lemole Endowed Chair in Integrative Biology and founding co-director of Villanova's Center for Biodiversity and Ecosystem Stewardship (CBEST), is renowned for his work in naming and studying geckos and other small reptiles. While his ability to visit these reptiles in far-reaching destinations has been limited during the COVID pandemic, Dr. Bauer’s work has not slowed down. Dr. Bauer collaborated on two breakthrough discoveries regarding geckos that were recently announced: many species exhibit sticky tail pads in addition to their sticky toe pads, and a species previously misidentified as the world’s smallest dinosaur is actually a lizard.

Birds of a feather, lizards of a scale

Dr. Bauer assisted an international research team, who have described a new species of Oculudentavis, from 99-million-year-old amber demonstrating that this genus, first identified as a “hummingbird-sized dinosaur,” was actually a lizard. The new fossil exhibits a diversity of features that identify it as a lizard, including scaled skin, and particular types of tooth attachment, eye structure and skull and shoulder bones. The new species, named Oculudentavis naga in honor of the Naga people of Myanmar and Northeast India, is represented by a partial skeleton that includes a complete skull, exquisitely preserved in amber with visible scales and soft tissue.

The team of lizard specialists, paleontologists and imaging specialists was assembled by Juan Daza, Assistant Professor of Biological Sciences at Sam Houston State University, and a former post-doc in the Bauer lab at Villanova. Other participants included former Villanova master’s student and now director of the Florida Museum of Natural History’s Digital Discovery and Dissemination Laboratory, Edward Stanley and Dr. Bauer. 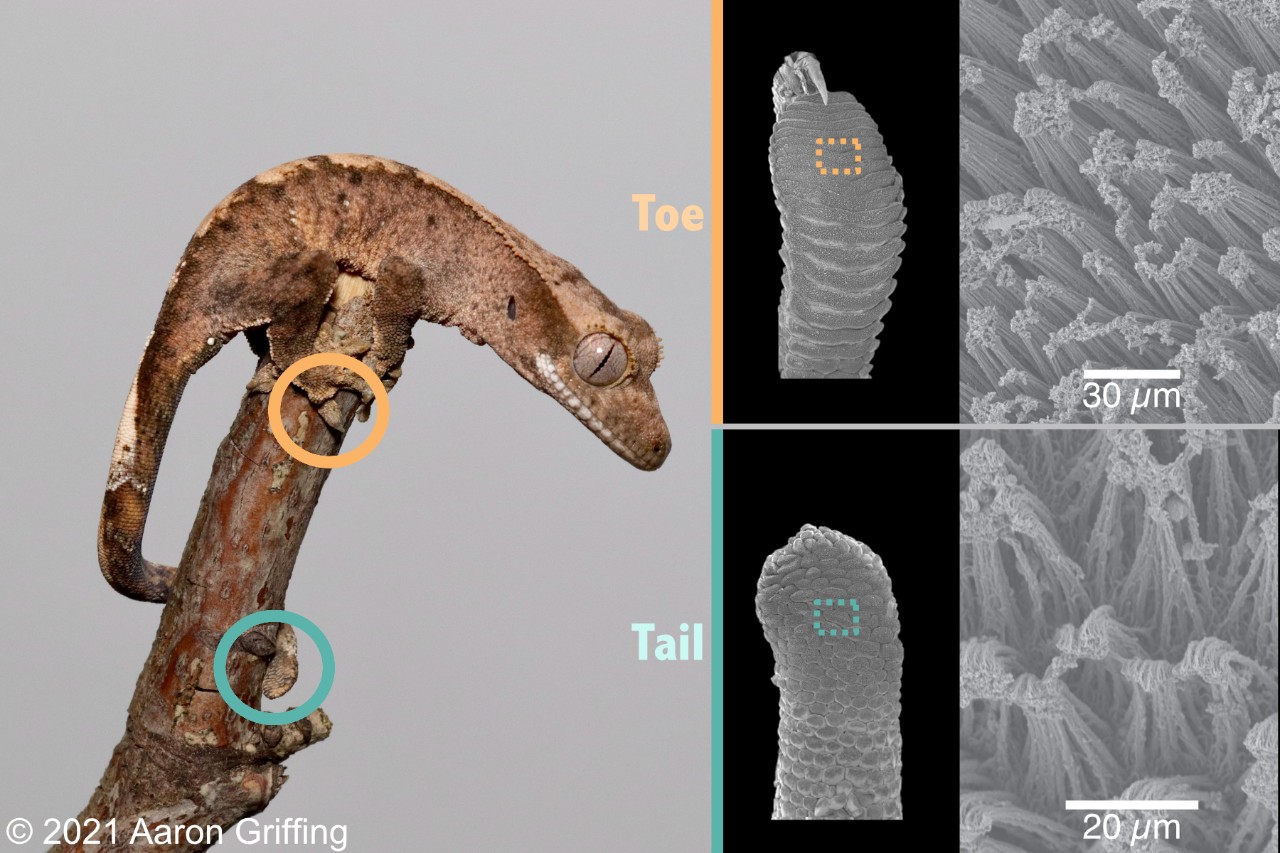 Some geckos have sticky toes…and tails?

In addition to his work on Oculudentavis naga¸ Dr. Bauer and a team of researchers from universities and museums across the U.S. have discovered that around 60 percent of the over 2,000 species of gecko have adhesive toe pads and approximately 70 of those species are known to have both tail and toe pads. These sticky tail pads are able to support up to five-times the mass of the animal, which exceeds the adhesive strength of the entire hand in some other lizard species. The tails of crested geckos also have well-developed bundles of muscle that allow for prehension, or grasping, making them fantastic climbers in their native arboreal habitat.  Aaron Griffing, a former member of Bauer’s lab and Villanova graduate student, is a current PhD candidate at Marquette University and is the lead author of the study.