Despite pandemic, Villanova students find a way to conduct important research—and get their work published 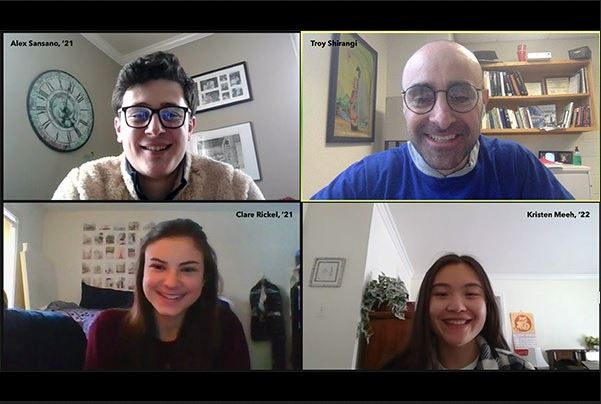 Understanding sex differences in innate animal behaviors has long fascinated biologists, especially as these differences can sometimes apply to human behaviors. In March 2020, Biology majors Kristen Meeh ’22 CLAS and Alexander Sansano ’21 CLAS, along with Cognitive and Behavioral Neuroscience major Clare Rickel ’21 CLAS, were looking forward to a summer on campus studying the role genes play in creating and producing instinctive behaviors. The students had undergone a competitive interview process and been personally selected for the work. They were slated to work in the research lab of Biology professor Troy Shirangi, PhD, and live in the Villanova residence halls.

Then COVID-19 hit, Villanova’s campus shut down, and the students’ opportunities to do independent research projects in the lab were suddenly in limbo. But their professor wasn’t going to see their dreams left in the dust. “I thought, there has to be a way we can still make it happen,” Dr. Shirangi says. “I knew these students were exceptional and highly motivated, and they deserved a chance.”

In 2019 Dr. Shirangi had received a National Science Foundation (NSF) prestigious Faculty Early Career Development (CAREER) Award to advance his research in neurobiology. He decided to dip into his funds from his NSF grant to enable the students to work as his paid research assistants on a long-distance project that he would make just as rigorous and substantial as the ones they would have done in the lab.

With Kristen in New Jersey, Alex in New York, Clare in Chicago and Dr. Shirangi in Pennsylvania, they formed a team determined to use three case-studies to explore the mechanisms by which sex differences in nervous systems and behaviors develop. Each student took a different animal: Kristen took worms, Clare took flies and Alex took rats.

In lieu of “wet lab” research, the four consumed hundreds of pages of research journal articles and had lab meetings over Zoom, where each student was required to present their findings. While researchers had, in the past, studied the three animal groups separately, never had all the information been examined together to produce a single paper.

“By comparing these three cases, we discovered a few mechanistic commonalities between them, which may point to ‘general rules’ by which sex differences in animal brains develop,” Dr. Shirangi says. “In theory, some of these concepts may apply to sex differences in human brains and behaviors.”

In the end, instead of a primary research article, Dr. Shirangi and his students would produce a review article—one that was accepted by a leading academic journal, Developmental Biology, and published in its January 2021 issue. Kristen, Alex and Clare are listed as first authors on the article.

It was a pandemic pivot born from necessity, and it turned out to be a terrific opportunity for the students. “As junior scientists, they were able to dive deep into the literature and contribute high-level work during a very difficult summer,” Dr. Shirangi says. “Our article certainly will help scholars who come after them.”