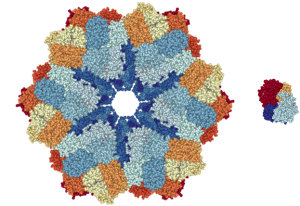 When soldiers get shot they need blood right away but often medics on the scene don’t carry blood because it needs to be refrigerated, and it’s therefore not available on the front lines.

Jacob Elmer, PhD, an associate professor of Chemical Engineering at Villanova University, is researching the potential of earthworm hemoglobin as a blood substitute. Most previous blood substitutes have been based on purified human hemoglobin, since it is a protein that does not require refrigeration and it is responsible for the most vital function of human blood—oxygen transport. Unfortunately, clinical trials have revealed that blood substitutes based on human hemoglobin cause many different serious side effects, including heart attack and stroke.

“We are addressing this problem by investigating an alternative blood that will buy soldiers time and will save lives,” says Elmer, PhD, who also serves as director of Villanova’s Drug Discovery and Development Laboratory. Elmer is working towards developing a protein-based (not cellular) blood alternative that does not need refrigeration.

Elmer’s research is in the animal studies phase and getting promising results. Research on hamsters has shown that earthworms, specifically nightcrawlers (Lumbricus terrestris) and red wigglers (Eisenia fetida), can effectively transport oxygen without causing the side effects observed with human hemoglobin.

Unlike blood from a blood bank that has to match a patient’s blood type, Elmer’s blood substitute can be used on any patient, even if the patient has a rare blood type. “We can help them, no matter what,” says Elmer. “In trauma situations in which a person’s blood type is unknown or if a person doesn’t have a Red Cross card in their wallet, the patient would have to wait until they get to a hospital to test for their blood type. But our blood alternative will be able to be administered immediately without having to do any tests.”

Elmer’s research is funded by a $432,392 grant from the National Institutes of Health.

He’s developing his protein-based blood because military personnel get shot a lot, often when they are far from a hospital or a blood bank where blood is refrigerated. For those in the military, donated blood is often not available, and 80 to 90 percent of combat casualties are due to hemorrhage that is left untreated because it takes them too long to get to a hospital; it often takes more than an hour to get these patients to a facility that stores donated blood. And that hour, commonly known as the golden hour – which is the first hour after an injury occurs – is when you really need to treat that patient, otherwise very bad things can start to happen.

The fact that blood has to be donated and that it’s a cellular product made of red blood cells that have to be refrigerated significantly limits options for treating patients. Cells will eventually go bad, even in the refrigerator, and this results in a lot of donated blood from blood banks being discarded after six weeks.

Medics can’t keep units of blood in their backpack because there’s no refrigeration in their backpack. Elmer explains that a blood substitute that does not require refrigeration is something that can go in the backpack of a medic who is on the front lines, and if one of the soldiers gets shot, the medic can immediately hook up the soldier via IV and restore their oxygen transport capacity.

In developing his blood substitute Elmer focuses on one specific function of whole blood: its ability to transport much-needed oxygen to a patient. “Whenever someone is treating a hemorrhage, one of the first things they have to do is restore oxygen transport, which is what my lab is doing,” says Elmer.

Elmer’s product will be free of pathogens, so there’s no chance for HIV, malaria or hepatitis to be in it because of the nature of the product, which is extracted from Canadian nightcrawler worms.