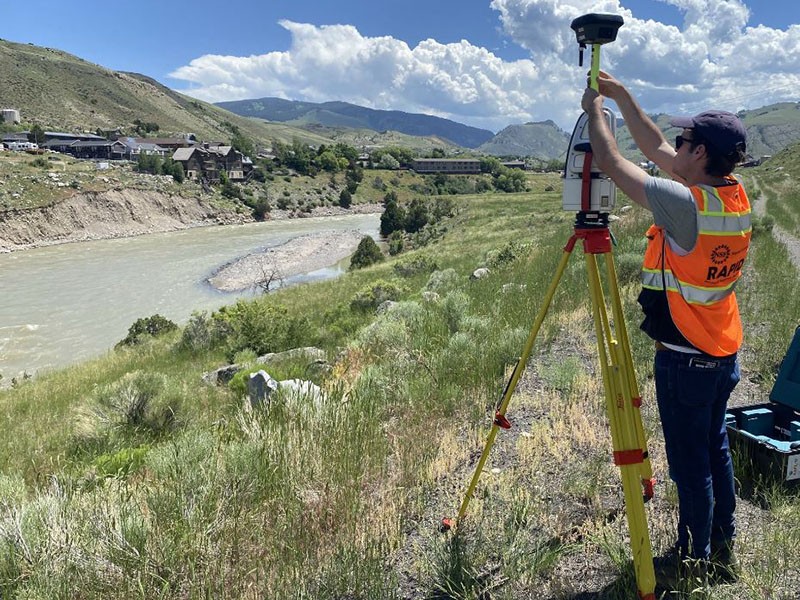 “The goal of the team is to collect perishable data so that we can learn as much as we can from these events and better design infrastructure in the future,” says Dr. Jonathan Hubler, who researches the effects that natural hazards have on soil and geotechnical infrastructure.

Historic flooding in Montana and Wyoming caused significant damage around Yellowstone National Park in June, as rushing waters took down bridges, unearthed pipes, and ripped homes off their foundations.

In the aftermath of the destruction, Jonathan Hubler, PhD, an assistant professor of Civil and Environmental Engineering, was on the ground in Montana surveying the damage to the park and its surrounding communities.

Dr. Hubler is a member of the Geotechnical Extreme Events Reconnaissance Association, or GEER, a National Science Foundation-backed organization of engineers and scientists who collect highly valuable data after natural disasters. With a mission of “turning disaster into knowledge,” the volunteer group of researchers and practitioners compile their findings into public reports in an effort to advance hazard-resistant design.

“The goal of the team is to collect perishable data so that we can learn as much as we can from these events and better design infrastructure in the future,” says Dr. Hubler, who researches the effects that natural hazards have on soil and geotechnical infrastructure.

Dr. Hubler received the call about the Yellowstone assignment while at a conference in Utah, then drove north to join a team of GEER colleagues, led by Dr. Anne Lemnitzer of the University of California, Irvine, and Dr. Kevin Franke of Brigham Young University. From June 30 to July 4, the crew assessed damage, recorded images, and spoke with residents and community groups about their experiences during the flooding.

“We talked to community members who said, ‘I’ve lived here for 65 years, and I’ve never seen anything like it,’” says Dr. Hubler, who spent much of his time in the hard-hit towns of Gardiner and Red Lodge, Montana. “The people in Montana were kind and forthcoming with information. They were always willing to point us in the right direction and provide us with support in any way that we needed.”

For Dr. Hubler—who also volunteered with GEER last summer after Hurricane Ida caused significant flooding in the Philadelphia area—the fast-paced work of the reconnaissance team enables him to learn on the fly and grow as a researcher, while also allowing him to use his skills to assist others.

“It’s sobering because a lot of people are affected,” he says. “Being able to help in any way you can—and maybe help understand why some of these things occurred so that we can prevent them in the future—is something that I enjoy.”