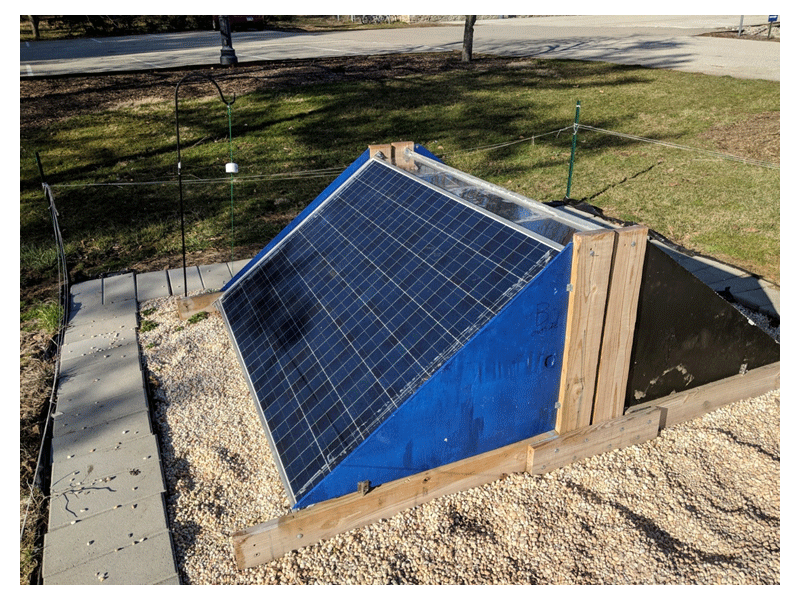 When new energy sources like photovoltaic panels compete with agriculture for large, open spaces and high intensity sunlight, which should we prioritize—or better yet, is there a solution that would allow for them to coexist? That was the question Dr. Finley Shapiro— then a Villanova University Visiting Assistant Professor of Electrical and Computer Engineering, now assistant professor of Engineering, Leadership, and Society at Drexel University—posed to Villanova’s Dr. Gerard Jones, professor of Mechanical Engineering and Senior Associate Dean for Graduate Studies and Research. In graduate student Michael Evans, they found someone passionate about finding the answer. His Mechanical Engineering graduate thesis “Agrivoltaics Greenhouse: A Solar-Agricultural Greenhouse Project” presents an innovative and promising concept that avoids the either/or debate.

Advised by Drs. Jones and Shapiro, Evans has developed a prototype that seeks to integrate food growth with solar energy collection. “The primary purpose of our prototype,” Evans explains, “is to expand the traditional growing season using waste heat generated by the photovoltaic (PV) panels to create a greenhouse effect, which warms the air within the test cell.” Dr. Jones adds: “Waste heat from the panels would normally be lost to the surroundings but we capture it in the greenhouse and use it to warm the inside air. This allows earlier plantings and a delayed harvest, possibly adding another crop cycle to the benefit of the farmers. At the same time, the panels deliver pollution-free electricity where needed.”

The prototype of the team’s agrivoltaics greenhouse was built on Villanova University’s campus and has been tested for more than a year. Constructed on a wooden frame with a concrete pad as its base, it features rectangular solar panels on either side of a structure that measures about 8.5' wide, 6.5' long and 2.5' tall. Solar radiation reaches plants and planters through a transparent covering positioned between the two panels. Evans notes that the team intentionally avoided using custom or specialized parts so that when his design proves effective it will be cheaper and easier to manufacture. And, he is happy to report: “We already have some promising experimental data which demonstrates the viability of this concept.”

In addition to the prototype itself, Evans developed a mathematical model for use in parametric studies. The model will allow him to computationally test design permutations in an effort to correct identified deficiencies in the original prototype. “Incident solar radiation, infrared radiation exchange, transmitted solar radiation, evaporation, convection, and conduction all play important parts in the environmental conditions of the cell,” he explains. A mass transfer model was also developed to predict internal humidity, another key greenhouse environmental factor.

The team has identified a number of next steps in the design, including improvement to internal climate control, potentially adding automated crop tending systems and making adjustments to panel angle and upper gap area to produce better growing conditions. “I am seeking external grants to take the work to the next level,” says Evans. “With further design iteration and interdisciplinary support, this project will offer the solution to the question of arable land use going forward.”