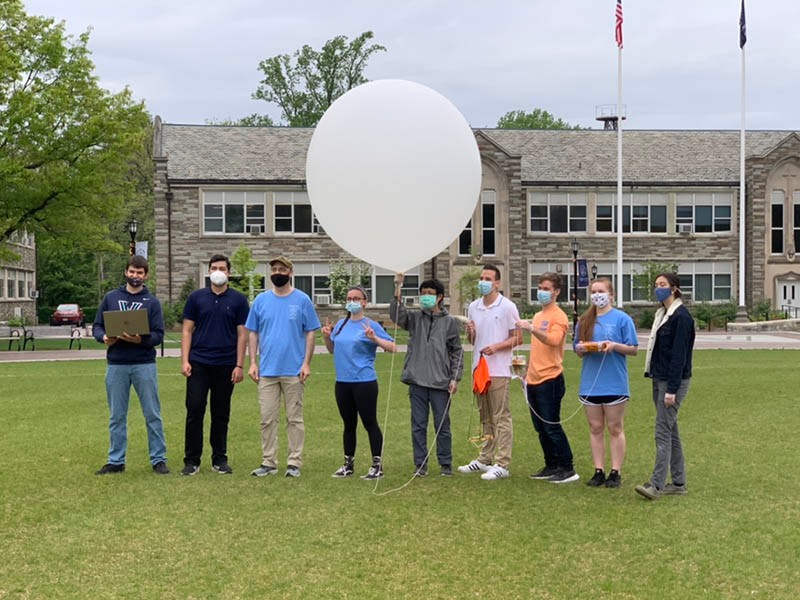 If you looked skyward over Villanova’s campus on May 3 you may have noticed two high altitude balloons (aka weather balloons). Both launched from Mendel Field—one initiated by the student chapter of the American Institute of Aeronautics and Astronautics, the other by the CubeSat Club. The launches were livestreamed.

CubeSat team project manager Christina Till ’22 ME says, “The club began three years ago with dreams as big as space! We have always wanted to get something into the air and over the past two years we have discussed launching a weather balloon.” The club’s first launch was accomplished with the help of a number of individuals and departments, including Dr. Alan Johnston, club advisor and Electrical and Computer Engineering associate teaching professor; Villanova’s Office of Student Involvement; and Jim McLaughlin and David White, experienced high altitude balloon mentors from Mount Carmel High School Amateur Radio Club in San Diego who also work with Dr. Johnston on a CubeSat Simulator project.

To prepare for the launch, various build sessions and meetings were scheduled with the club split into two sections: flight software and flight plan. The flight software team helped create the dashboard that provided readings from the payload, which featured a sprite satellite called an AmbaSat (about 1" x 1" in size). The AmbaSat would test the radio beacon and ground station antenna the club built last year on the roof of Tolentine, and provide telemetry readings including pressure, altitude, temperature, and humidity. The flight plan team ran various simulations to predict how far the balloon would travel, where it would pop, how much helium was required, and what the ascent rate was. A spot GPS tracking device was used to provide the payload’s location for retrieval after landing.

Christina reports, “The CubeSat Club’s launch went very well!” While the flight time was projected to be about one hour, it ended up being 90 minutes and flew a bit further than the predicted location of Millstone, New Jersey. “It landed within 20 km of our prediction and only a 10-minute drive from where the AIAA balloon also landed,” she says, “and the results were well within the range estimated by the prediction software.” The launch height, unfortunately, was not able to be determined due to anomalous readings that require further analyzation but was anticipated to be roughly 56,000 feet high. In addition, on target telemetry readings were obtained from the first half of the launch.

“While this launch was amazing,” says Christina, “our club now knows what we can do to improve, and we look forward to another launch next semester!”