Engineers’ resourcefulness was on display this summer as several College programs adapted to a virtual environment. Among them was the appropriately named INNOVATE, a partnership program of Villanova University’s College of Engineering and L3Harris Technologies. INNOVATE provides self-directed student teams with a two-month paid opportunity to develop innovative solutions to unmet societal or technical challenges. In 2020, part of the challenge was adjusting to teamwork that could only be accomplished online. As a lead-in to the teams’ final presentations to L3Harris on July 30, Assistant Dean of External Relations Keith Argue offered this assessment, “They rose to the challenge and exceeded all expectations.” 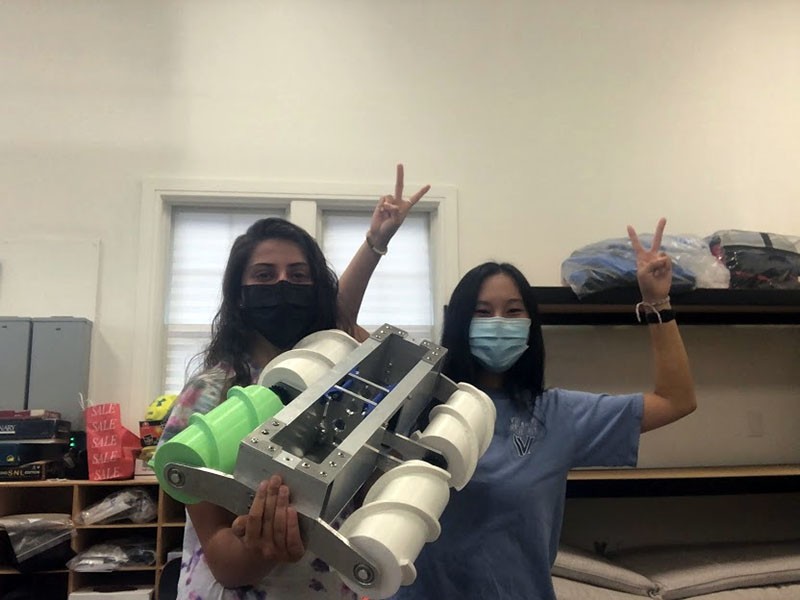 For over a decade, faculty and students from the College have partnered with the Golden West Humanitarian Foundation to contribute to unexploded ordinance remediation and removal in Cambodia. Before demining efforts can begin, the brush and surrounding areas must be surveyed and cleared, which requires a great deal of time, effort and expense. The Snake Bot was specifically designed to move through heavy bush and improve the efficiency and safety of the landmine detection process. This inexpensive robot can detect mines before the brush is cleared, saving time and accelerating the demining process.

The robot’s segmented design and inline-screw drive system provides the Snake Bot with a high degree of mobility and the ability to move in any direction over uneven terrain. As it is the most technically complex component, the team dedicated their INNOVATE experience to the design and development of the drive train and systems. Over the next year, the team plans to incorporate a sensor to determine the location of unexploded ordinance and integrate an MFAM (magnetometer technology) sensing device.

Team member Julia Al-Nawal found INNOVATE “extremely rewarding” and noted she was “stronger for the experience.”

Ross Niebergall, Chief Technology Officer for L3Harris, said, “I applaud the mission of this research. It’s very important for the safety of this region of the world.”

Human factors, like distraction or fatigue, are the primary contributors to roadway crashes. Therefore, to improve traffic safety, it is necessary to obtain detailed and direct observational data on driver behavior to better understand how the driver interacts with roadway elements and other vehicles. Such behavior can be recorded and analyzed in today’s high-end driving simulation systems; however, these advanced systems are cost-prohibitive for most, preventing widescale adoption despite compelling evidence of their effectiveness.

In response, the Driving Simulator team sought to develop a simple, flexible, portable and affordable system, integrating common gaming hardware components and developing a rich virtual driving environment. In addition to serving as a tool for researchers, a mobile and affordable simulator can be effectively used in training young drivers or specialty vehicle drivers, leading to reduced rates of crashes.

The Driving Simulator team completed a first proof of concept design that integrated communication between the steering wheel/pedal system and AR headset, developed the driving simulator scenario platform, and established a driving performance analysis platform. This coming year, a senior capstone design team will continue to develop and enhance the team’s system.

Heidi Wolfe, L3Harris Senior Engineering Director said, “Excellent project and I like the focus on safety and reducing accidents.”

Scott Bartholomew, L3Harris Engineering Director asked: “Did the team consider utilizing this tool to evaluate driver distractions? With all the tech that the automotive industry is adding, they may be able to use this tool to better design/integrate those systems into a vehicle.”

In applications as diverse as image recognition, medical diagnosis and financial analysis, the accuracy of artificial intelligence (AI) often exceeds that of humans. For example, deep neural networks (DNN, aka deep learning) a sub-field of AI, are an incredibly powerful analytical tool; however, its inherent computational complexity makes it challenging to deploy such a tool in low-power embedded devices, such as smart phones or Internet of Things devices. An emerging AI method called hyperdimensional computing (HD) has been shown to be more efficient than deep learning because it uses hypervectors rather than numbers in its calculations.

Using human language recognition as it’s application, the Neuro Language team developed a brain-inspired, HD powered platform that was implemented on the low-power Raspberry Pi device. The team built upon the work of the Rahimi Lab (UC Berkeley), which implemented HD language classifier program in MatLab. Using the Rahimi model as their foundation, the team created and implemented a new HD language recognition model in C and Python, exceeding the speed of the Rahimi MatLab implementation by ~8X in C and ~2X in Python. Their Platform can detect 27 different languages and over the coming year, the team plans to increase the efficiency of the Python implementation and incorporate languages like Korean, Mandarin and Arabic that are not formatted as a string of characters.

Team member Caroline Maclaren described INNOVATE as “an incredible experience in the midst of COVID-19.”

Kunal Yagnik, L3Harris Project Engineering scientist, said, “I'm impressed that you have an operational website that anyone can access to try this out.  Seems like a very useful technology.”

Heidi Wolfe asked, “Have you considered working with anyone studying linguistics and language acquisition? Can the pattern recognition handle regional dialects within a language?” 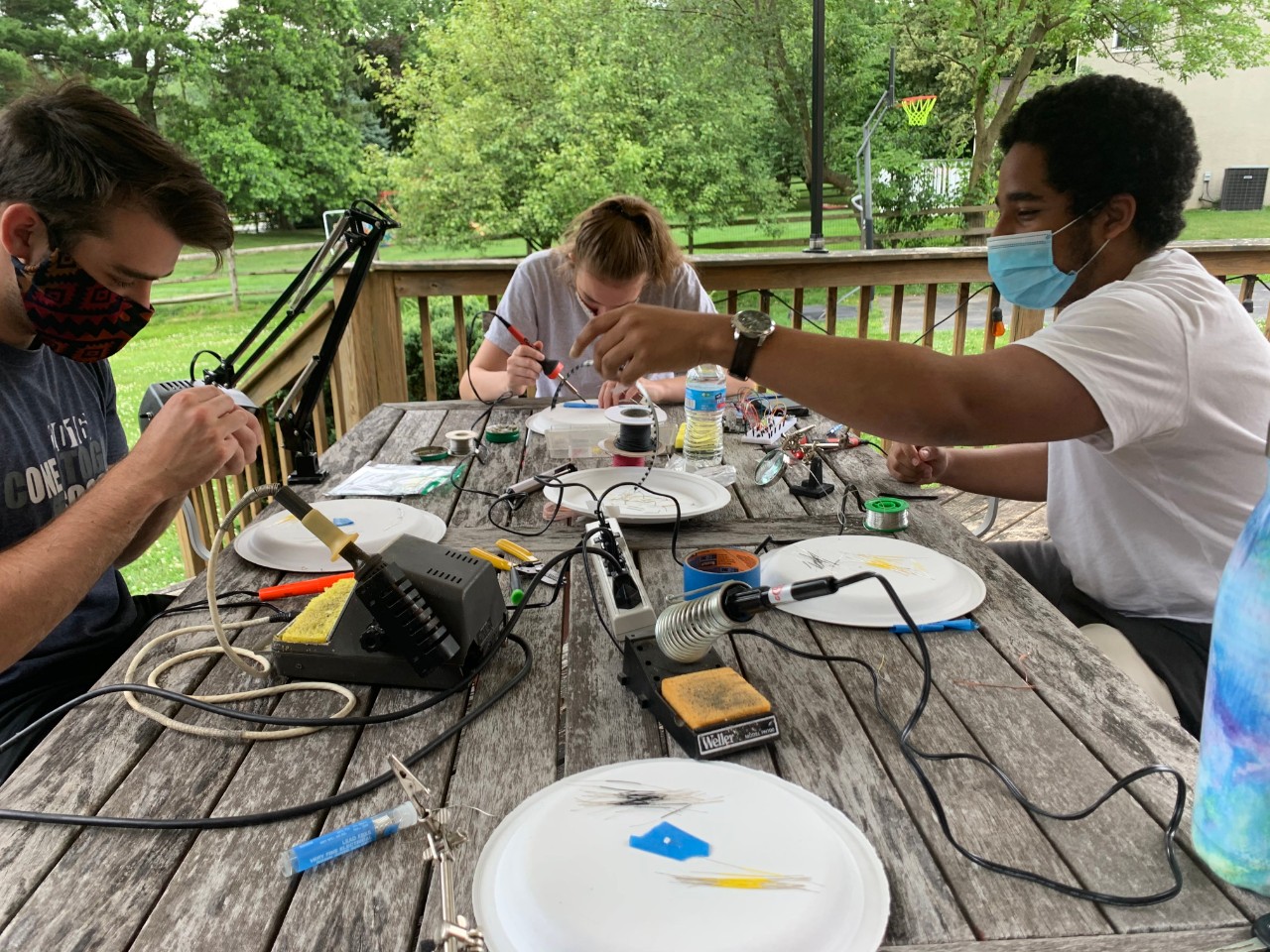 The Blue Blanket team developed a reliable, convenient, comfortable, effective and affordable blanket to treat infant jaundice at home. It would serve as an alternative to current therapies—fluorescent/ halogen lights and fiber optic pads—which are expensive and/or inaccessible. In addition to surveying its target audience to determine their needs and preferences, the team researched the light intensity, heat transfer and wavelength requirements for treating infant hyperbilirubinemia and the effectiveness of various light sources embedded/woven into numerous fabrics.

The Blue Blanket team developed a physical prototype of a safe and comfortable blanket with embedded lights that would meet the medical requirements for treatment. The plan is to develop a second and third generation prototypes, incorporating a flexible circuit board and advanced monitoring capabilities, and to partner with a manufacturer that’s interested developing this commercial and humanitarian device.

Ross Niebergall responded: “Great project that solves an important issue for millions of babies annually.  I also like the truly interdisciplinary team needed to understand and solve this problem.”

Christine Fischer, Senior Talent Acquisition Director, said, “As someone who just had a baby, this hits home and demonstrates—as all the projects do—how technology truly impacts every aspect of life.”

Ann McKenzie, director of College Relations for the Fitzpatrick College of Nursing asked, “Any thoughts on looking at secondary power source like solar/battery packs for those with electricity instability or lacking electricity either in US or abroad?”