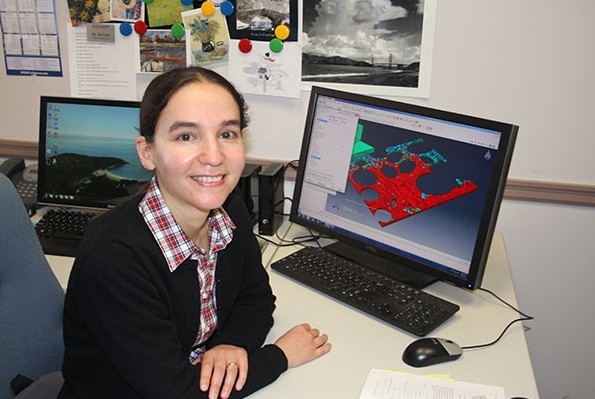 Dr. Ani Ural, associate professor of Mechanical Engineering and director of the Computational Biomechanics and Solid Mechanics Laboratory, has been awarded a three-year National Science Foundation collaborative research grant for “Uncovering the Multiscale Determinants of Atypical Femoral Fracture using MRI and CT-Based Modeling.” Total funding for the project is $529,427 with $250,784 awarded to Villanova University, which is the lead institution in collaboration with the University of Pennsylvania. The grant supports fundamental research to uncover the factors that contribute to atypical femoral fracture, which is a rare side effect of long-term use of some drugs—most notably bisphosphonate—to treat osteoporosis.

Osteoporosis, or a decrease in bone strength, is responsible for over two million bone fractures annually in the United States. A typical osteoporotic femoral fracture (more commonly known as a hip fracture) occurs at the femoral neck, which connects the femoral shaft to the ball part (femoral head) of the ball-and-socket joint. Atypical femoral fracture occurs in the femoral shaft and has emerged as a possible side effect of long-term osteoporosis drug treatments. Though quite rare in the general population using bisphosphonates (3.2 to 50 cases for 100,000 person years), these fractures have high morbidity and mortality outcomes. Those with prolonged treatment are at greater risk (100 cases for 100,000 person years). Given fear of this side effect, many osteoporosis patients decline treatment, which perpetuates the problem, increasing osteoporotic fracture rates across the population.

This project will make a computer model of atypical femoral fracture, based on magnetic resonance and computed tomography imaging of cadaver bones, which will then be used to study how the effects of bone geometry and material properties (for example, how hard or soft a bone is) combine to determine atypical femoral fracture risk. This new understanding will ultimately improve the ability to identify those at risk. Dr. Ural says, “These longer-term outcomes will result in improved quality of life for patients and reduced health care costs.”