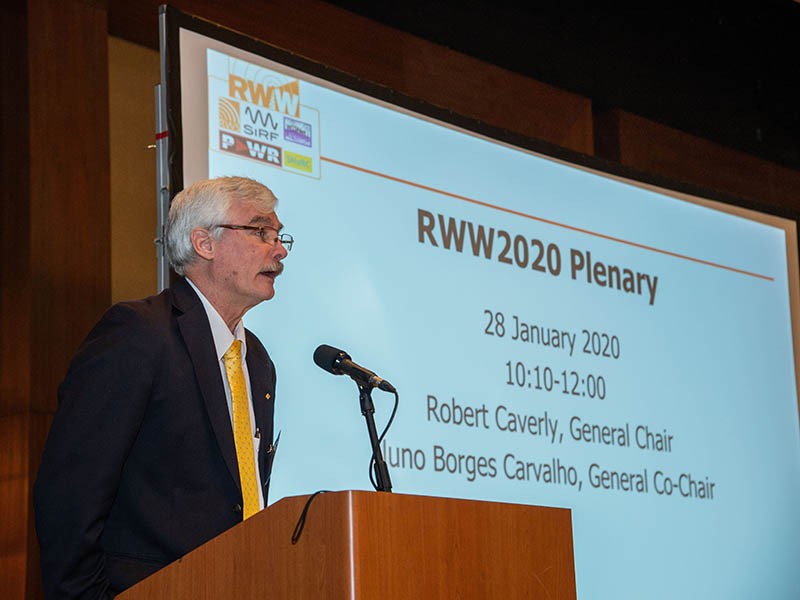 Each January for the past 20 years, the IEEE Microwave Theory and Techniques (MTT) Society has hosted Radio and Wireless Week (RWW2020), which features various co-located conferences with the theme of radio and wireless engineering systems. This year, RWW2020 was held in San Antonio, TX, with Villanova University Electrical and Computer Engineering Professor Robert Caverly, PhD, as its General Chair. Appointed by the RWW Executive Committee, Dr. Caverly first served two years ago as conference treasurer, then technical program chair, before taking the lead role this year—an opportunity he describes as “quite an honor.”  The week’s five co-located and related topical conferences focused on the intersection between wireless communication theory, systems, circuits, and device technologies, creating a unique forum for engineers to discuss various technologies for state-of-the-art wireless systems and their end-use applications.

Dr. Caverly explains, “The RWW2020 conferences bridge the gaps between digital, RF, hardware and software, which all need to be seamlessly combined to keep the wireless industry and mobile applications moving forward.” The co-located conferences included:

Other co-located events included the IEEE Internet of Things Summit, as well as the Automated RF Measurement Techniques (ARFTG) meeting. Sponsored by the IEEE Microwave Theory and Techniques Society, RWW2020 had a typical conference program with technical papers presented as both standard podium presentations and a series of poster sessions. There were also four Sunday workshops, a special track on Monday for IEEE Distinguished Lecturers, and a demo session. The plenary session was held Tuesday morning and introduced by Dr. Caverly as part of his role as General Chair.

Dr. Caverly also presented a paper during the RWS portion of RWW2020 titled “Determining the Constant PIN Diode Impedance Point for Broadband Reconfigurability.” He says, “PIN diodes are widely used for reconfiguring various components in wireless systems, and as systems become increasingly broadband and multiband, having knowledge of the behavior of the switching devices will provide microwave design engineers the tools they need to minimize losses in reconfigurable systems.”

A Villanova College of Engineering faculty member since 1997, Dr. Caverly teaches courses in Microwave Theory and Techniques as well as Radio Frequency Circuit Design. He is also director of the College’s Microwave and Electromagnetics Laboratory. Dr. Caverly has published more than 100 journal and conference papers and two books: CMOS RFIC Design Principles (2007) and Microwave and RF Semiconductor Control Device Modeling (2016). An IEEE Life Fellow and active member of the (MTT) Society's Administrative Committee, he is currently the editor-in-chief of IEEE Microwave Magazine and on the editorial board of IEEE Transactions on Microwave Theory and Techniques. Dr. Caverly is an MTT Distinguished Microwave Lecturer (2014-2016, currently DML Emeritus).