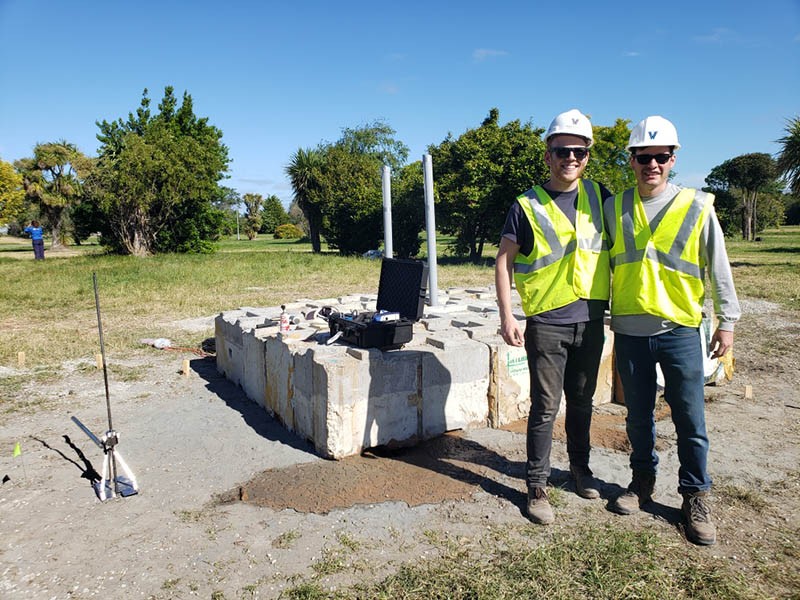 The National Science Foundation awarded Assistant Professor Jonathan Hubler, PhD, a nearly $50,000 RAPID (Rapid Response Research) grant for “Evaluation of Pre and Post Blast Liquefaction Soil and Site Parameters.” With the award, Dr. Hubler and graduate student James Hanley ’18 CE spent two weeks in New Zealand where they leveraged field-testing equipment available from the Natural Hazards Engineering Research Infrastructure (NHERI) RAPID facility. At the site of the 2010-2011 Canterbury Earthquake Sequence, they were able to evaluate both native soils that liquefied during the quake, as well as improved soils that represent a promising ground improvement technique to mitigate differential settlements and surface manifestations of liquefaction.

Soil liquefaction is a phenomenon that can occur in saturated, loose sand and silt sediments during earthquake shaking, which causes these soils to behave as a viscous fluid. This results in loss of strength and stiffness, often causing significant damage to civil infrastructure, such as buildings, bridges and dams. Advances in soil liquefaction engineering have helped engineers predict liquefaction triggering and its consequences, thereby reducing casualties and damage to infrastructure. However, changes in soil properties both during and following liquefaction, and the affect that these changes can have on soil stiffness and settlement require further study to improve prediction of both post-liquefaction response and behavior during future earthquake events.

Dr. Hubler’s research will result in a unique dataset of soil and site parameters for pre and post liquefaction scenarios at two varying sites, enabling evaluation of changes and improving understanding of the effect of these changes on design of earthquake resilient infrastructure. He says, “The results have application to regions of the United States that are prone to liquefaction.”